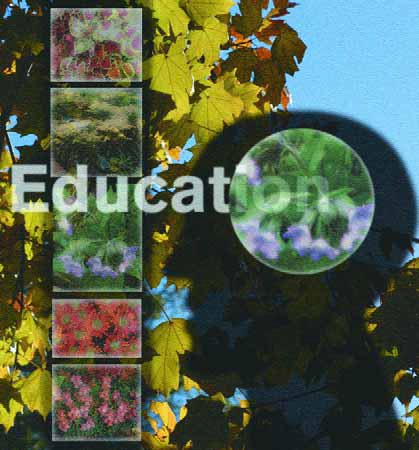 I never really thought much about the plants and trees surrounding me until I started edging my way toward the landscape-design business.

Growing up, I’d look out my bedroom window and into our backyard and see plants and trees, but I didn’t know that they were called Junipers or Giant Birds of Paradise or Ficus trees. They all looked pretty much the same to me – a generic veil of greenery.

My path of discovery began when I bought my first house on Long Island. All of a sudden, there were rules about what I could and couldn’t grow and, more specifically, about what would and wouldn’t grow. I had no idea that the purple Rhododendron I was planting in my front yard would die in the full sun or that I couldn’t plant Impatiens and expect them to last year after year with their full summer brilliance.

With trial and lots of error, I eventually learned that there was much more to plants and trees than (literally) meets the eye. I actually began to “see” what had been or was being planted in my garden and in my neighbors’ yards. Soon I was able to identify plants by their leaves and flowers and trees by their overall shapes, and I could tell you whether those trees were deciduous or evergreen.

Eventually I headed for California, confident in all my newfound plant knowledge and happy to give up Wall Street for my true calling as a landscape designer – only to find that things are much different on the west coast.

You can plant Impatiens here, for example, and will find that they can winter over (even if they do get a little ragged), and many of the trees that I thought were deciduous kept their leaves. Immediately, I found myself factoring in the climate at a point where I didn’t yet know enough about the different types of plants available all around me.

A return to Wall Street was looking better and better: How could I possibly ever learn enough about plants to guide someone in designing the garden of their dreams?

I soon recognized that I needed more education on the plant kingdom if I was going to be successful in this business. I went back to school to take plant-identification classes (almost as exciting as they sound) and discovered to my amazement that this was the ticket to making everyone think I was a plant genius.

By the end of the first year, I felt great about being able to identify more than 300 individual varieties of plants, including nine different types of pine trees. (Talk about overkill: Looking back, I’ve only needed to identify two different pine varieties during the past 15 years.)

What I didn’t perceive while I was taking classes and stuffing my head with facts was that, even though I now possessed a vast body of knowledge, most of the plants I had learned to identify were ones in which my clients wouldn’t be or weren’t particularly interested. I was discovering that the design business was less about knowing plant specifics than it was about knowing shapes, leaf colors, flowers, growth habits and overall lifetime characteristics of hundreds of plants – far more than I ever encountered in class.

In retrospect, I see this as one of life’s little lessons: I’ve left school behind but keep learning in a less-structured way every day and will, every day, almost certainly find a new and interesting variety I can add to the repertoire of plants I trust. The classes had value, but what I really needed to do was open my eyes and get to work.

All this is by way of background for my work on the project I’ve discussed in the past few issues of WaterShapes: It’s one that has called on the knowledge I’ve been accumulating for the past 15 years, but it’s also one that shows that there are few absolutes and no easy ways to find solutions to design challenges.

In this case, I was blessed by having almost a year to consider the planting design. That wasn’t exactly by choice, but instead has to do with the fact that landscaping is normally the last project phase to be planned and implemented.

So I waited (and waited) until the structure of the house and the hardscape had final plans, knowing that whatever I might visualize before those elements took shape would inevitably be off the mark. Yes, I could think about an overall plant palette, but without the hardscape in particular I couldn’t determine with any specificity what types of trees and plants were needed and where they would be placed.

As we waited, I could suggest enough different trees to give my client some ideas, but what I’ve found is that it’s difficult to choose the right tree until the setting truly takes shape. In larger areas, of course, a designer has more freedom to select trees that might drop leaves, fruit, or flowers. In a more confined space such as my client’s backyard, however, tree selection is hemmed in by pool, hardscape and structures.

In this particular case, we have a planter bordered on one side by a driveway (much in need of camouflaging) and on the other by a deck and pool. That in mind, we wanted to make sure that the four trees we intended to plant in this roughly six-to-ten-foot strip wouldn’t create too much of a mess. We’re also dealing with a traditional Spanish-Colonial-style home, and this also limited the range of site-appropriate possibilities.

Beyond those two points, another key factor is that we needed to block the view of the neighbor’s house from the master bedroom and bath on the second story. Seems simple enough, but this is a neighborhood in which lots of older homes are being knocked down and replaced by much larger homes and mini-estates.

As strange as it may sound, the neighbor we are trying to block out is elderly, and we have the sense that when she’s gone, someone will buy the house, tear it down and build a monstrosity. Simply put, we’re planning for the future.

With all these issues in mind, here are the criteria that framed of our tree discussions. Whatever we chose had to be:

[ ] Compatible with Spanish-Colonial-style architecture [ ] Compatible with the property’s existing trees [ ] Clean, dropping as few leaves and as little debris as possible, given proximity to both pool and driveway [ ] Evergreen, preferably, and relatively fast-growing [ ] Large enough to block out the neighboring house by rising to a height of at least 30 feet quickly – and higher eventually [ ] Able to blend with the rest of the existing and proposed landscape.

To help the client decide, I needed to find a mature specimen – and make sure the choice wouldn’t be one that would make the client want to curse me later.

It sounds simple, but it proved a difficult process. In fact, I consulted no less than three arborists, two landscape architects, two landscape contractors and two different nurseries along the way, each offering opinions without too many points of agreement.

As I spoke with these people, I recognized that each of them had some sort of vested interest in the decision: The nursery wanted to sell us the most appropriate selection – but also the largest and therefore the most expensive one. For their parts, the arborists and tree trimmers wanted us to use a tree that would be easily maintained; the contractors hoped to plant whatever was most likely to survive and grow well; and the landscape architects and designers had personal favorites based on past experience.

The process was ungainly, but ultimately it served an extremely important purpose and reminded me of those days before I knew much of anything about plants and trees other than that they were green. Now my client was the one in the uninformed position, and it was up to me to make the call.

The point is, most people don’t recognize how much the trees in their yards affect their lives. Trees can create shade, block out unwanted views, frame views you like, create terrible messes year ’round, serve up brilliant flower displays or delicious fruit and give you a great feeling when you look out a window. They can do some of this or all of this, and navigating the range of possibilities for a client is quite a responsibility.

As we neared our decision, I went back to basics and looked at the trees as the “bones” of the garden, the framework for everything else I would plant.

In that light, trees are never something to be taken for granted – despite the fact that most people do so because they aren’t attuned to the effects trees have on the landscape and the function trees have in specific settings or the ways they change with time. The right tree is compatible with the rest of the landscape, whereas the wrong one creates a mess or, worse yet, kills off the rest of the plants.

As I learned with my bamboo nightmare (November 2003, page 22), it’s extremely important to research major plant selections thoroughly before you place any orders. The affect the plants have on your client’s life and lifestyle might come back to haunt you, or you might get a stream of calls telling you how peaceful and serene it is sitting under the gorgeous tree you selected and planted in the backyard.

Bottom line, there is no tree that is necessarily perfect for any given situation. So what we must do is define criteria in as much detail as we can, isolate plants that meet most of them and make final choices with care and thought. Doing so, I think, gives us the best opportunity for long-term success.