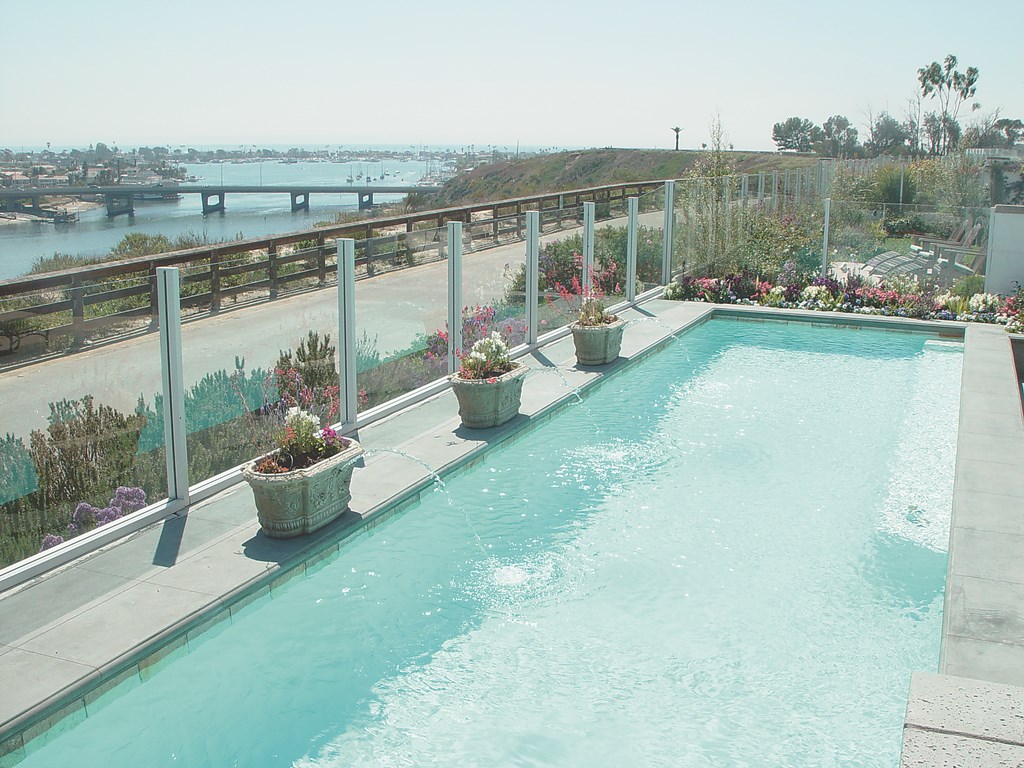 The way we see it, the most successful watershapes take two participants: a visionary designer who can express the clients’ desires, and an accomplished builder who can turn that creative vision into reality.

We at Pure Water Pools in Costa Mesa, Calif., have been fortunate through the past 20 years to have worked with many of the most talented architects and landscape architects who work in our area and have been even more fortunate to have developed strong relationships with several of these professionals. One of our most productive partnerships has been with landscape architect Dave Pedersen, a designer who serves upscale residential clients along the coast.

His signature is his ability to incorporate his clients’ personal style with the outdoor structures he’s called upon to design. We’ve worked with him on several projects through the years, and we’ll be using two of them here to illustrate exactly how the collaboration has worked.

BEAUTY ON THE BAY

Our relationship with Pedersen is a two-way street. Sometimes he’ll contact us in the early stages of design development; other times, he calls after the plans have been created. We return the favor by passing his name to watershape clients in need of a top-flight designer.

In either circumstance, the focus is always on clients’ needs. In fact, successful collaborations between contractor and designer always begin with clients, no matter whose door they happen to knock on first. Very often, the process starts when a couple returns from a vacation on which they saw a great swimming pool or sat in a great spa. Sometimes all it takes is a picture in a magazine. However it progresses, the idea starts with the customer, moves to the designer and then goes to the contractor for implementation. 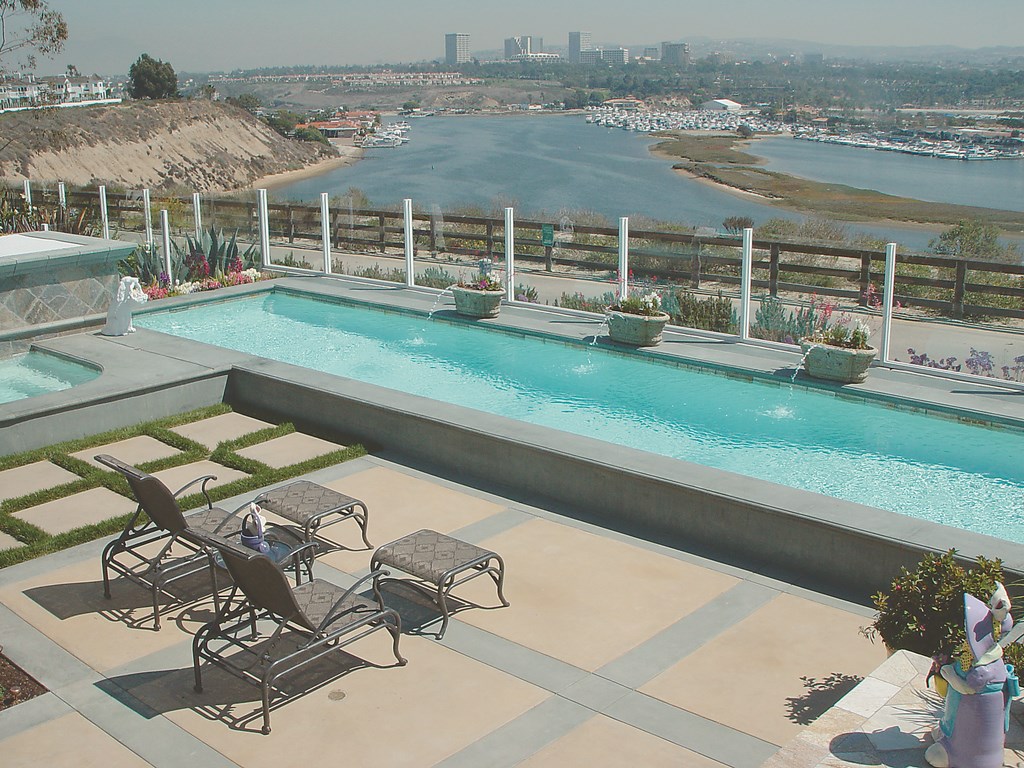 If the designs are complicated and/or exceptional, early and constant coordination between the builder and the architect is required to ensure that the plan is mechanically feasible and still captures the illusion the architect and clients are seeking. In the case of the first project illustrated here – a set of watershapes for a home high on a cliff overlooking Newport Beach’s Back Bay – we were involved very early.

The home had been one of the models for its development, and the owners basically wanted to start with a clean slate out back. Pedersen had already drawn up some plans that reflected his usual care in considering their personalities – in this case with clean, crisp lines that harmonized with the colors and minimalist styling of the home’s interior.

He also determined that they wanted to fill a very small space with lots of functionality – a lap pool, decorative waterfeatures, a barbecue and a spa with a cascade, all in a 35-by-50-foot space and none of its structures to interfere with the view of the bay and Newport Beach through a long glass wall.

As designed, the backyard was to feature a 41-by-9-foot lap pool installed slightly above grade beneath the length of the view wall. The spa and associated hardscape at one end of the yard offered a set of angular forms, mostly squares with rounded corners. The overall effect was of a chessboard in soft, muted tones.

From the start, Pedersen asked us for feedback and ideas. Originally, the working design called for sections of pre-cast coping around the pool and spa that we thought exaggerated the chessboard effect. As an alternative to all those additional squares, we suggested using a continuous, double-wide strip of poured-in-place
concrete to provide a smooth, unbroken line running the length of the pool and terminating at the raised wall. This would lead the eye directly to the skyline and the distant views.

Pedersen and the clients liked the idea and altered the plans accordingly.

We also had several discussions with Pedersen about a wall that doubled as the spa/waterfeature wall and as a place to hide the equipment. The layout was a challenge because the small equipment area also housed two air conditioning units for the house.

We were really hemmed in. Between finding room for the pool equipment and working around the air conditioning units, we had to find clearances for electrical panels and setbacks from property lines. Our marching orders were to make it all fit in as little space as possible to maximize the yard. (This was extremely expensive real estate, after all, and the clients didn’t want to see too much of it devoted to making everything work!)

Adding to the fun, the clients wanted to be able to run a series of planter-based “spitters” across the raised pool edge when the pool was not circulating. This meant that these small waterfeatures needed their own pump. In addition, they wanted five additional jets in the spa – and the extra pump that would make them work. 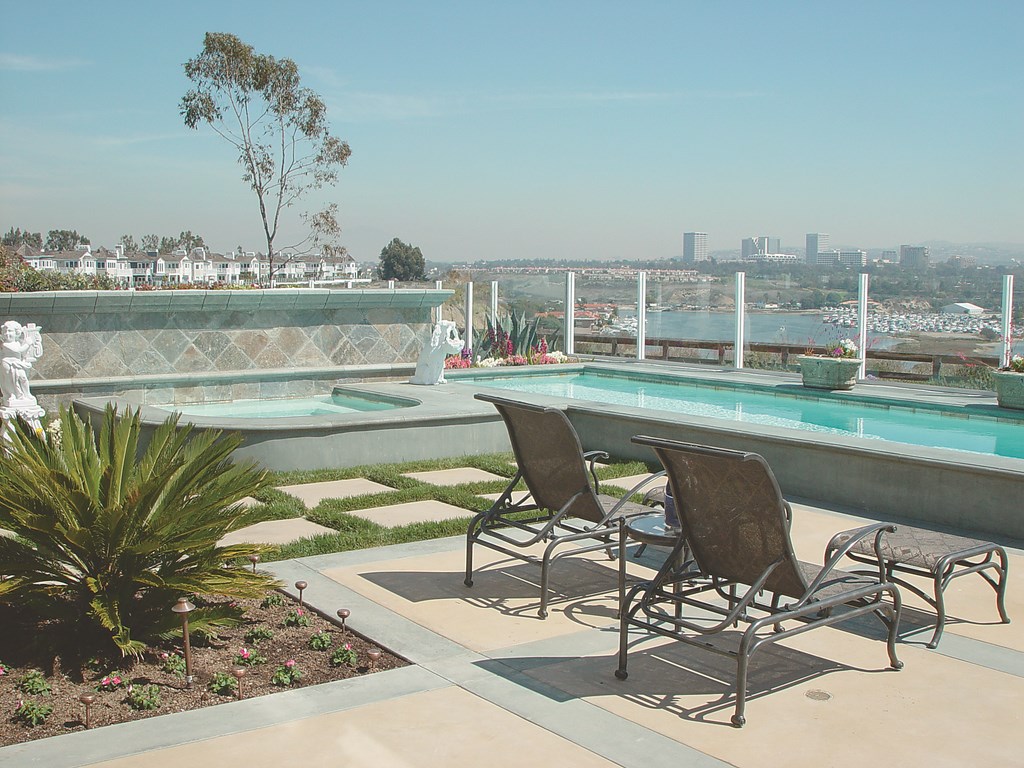 The space allotted on the plans was not large enough to accommodate all of this, so we went back to the plans and widened what we were now calling the “equipment wall” – which altered the weight of the Kashmir slate finish relative to the coping and threw things out of visual balance.

Pedersen suggested raising the wall’s height to compensate for the added width along with the addition of a decorative pre-cast cap to match the coping cap. This adjustment enabled us to maintain the balance and clean lines while giving the clients all the bells and whistles they wanted.

Participating in this sort of creative give and take is a powerful, heady brew for contractor and designer alike, and it takes time to develop the comfort level and trust needed to keep things moving forward. We’ve reached that level with Pedersen and have found that one project leads naturally to another – as was the case with another collaboration with him, this one in a nearby upscale neighborhood known as Newport Coast.

Both the Back Bay and Newport Coast lots offer phenomenal views of the Pacific Ocean and surrounding hillsides, but the similarities basically end there. Where the Back Bay project was on level land, the Newport Coast parcel was a corner lot with elevations that dropped off dramatically from about the midpoint of the yard.

The Newport Coast homeowners had few basic demands, but even their simple requests tended to ratchet up the difficulty of the project by several turns at once.

Take the specimen palm tree in the middle of the yard: It wasn’t to be touched, which severely limited available options for pool placement. They also wanted the pool to take up as little of the yard as possible – but it had to be big enough for the children to have a good time swimming. And they wanted a grass area, a barbecue, a bar – and maintenance of the unobstructed view, of course. 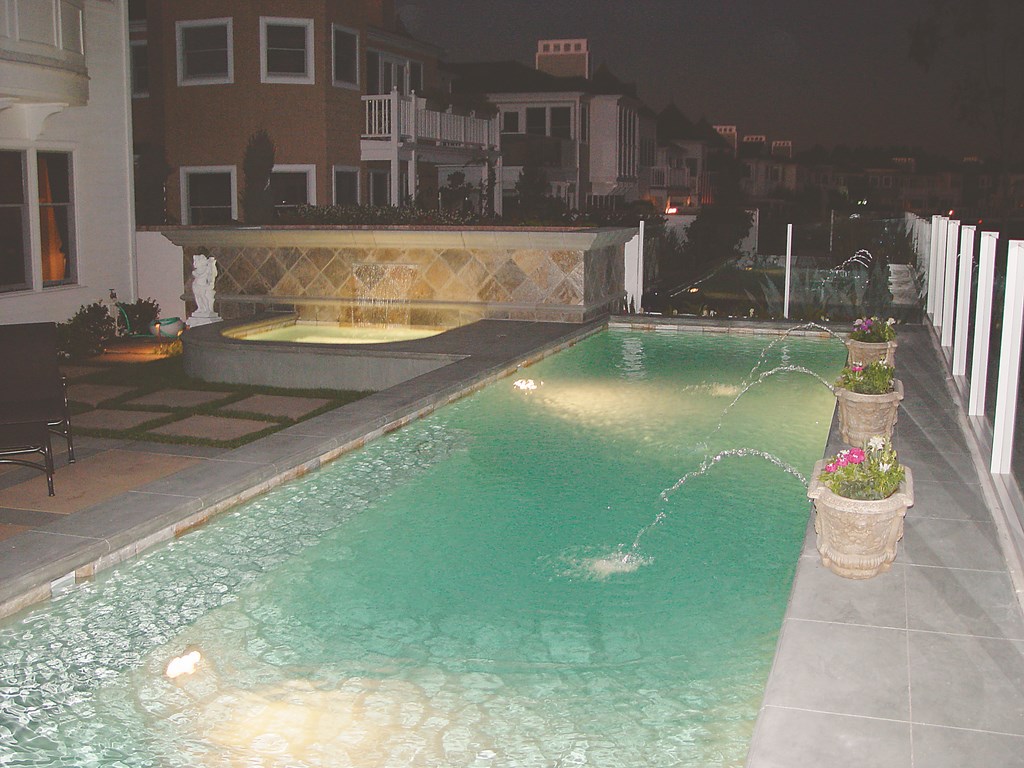 Although this parcel has a bigger yard than the Back Bay lot, the space is still small when you consider that half of it is consumed by unusable slope.

The obvious starting place in designing for a sloping lot with an ocean view is a vanishing edge, but given the slope, accommodating the trough would have pushed the pool too far back into the yard to make the clients happy.

So instead, Pedersen used the lay of the land to inspire the shape, incorporating its curves and contours while abandoning the vanishing edge altogether. The result is a combination of short lines, sharp corners and a large arc across the vista. An extended seating bench runs from the shallow steps and around the circular pool overhang, ending at the raised spa. This seating area provides a wonderful place to absorb the view and creates a strong visual boundary that encloses the pool. 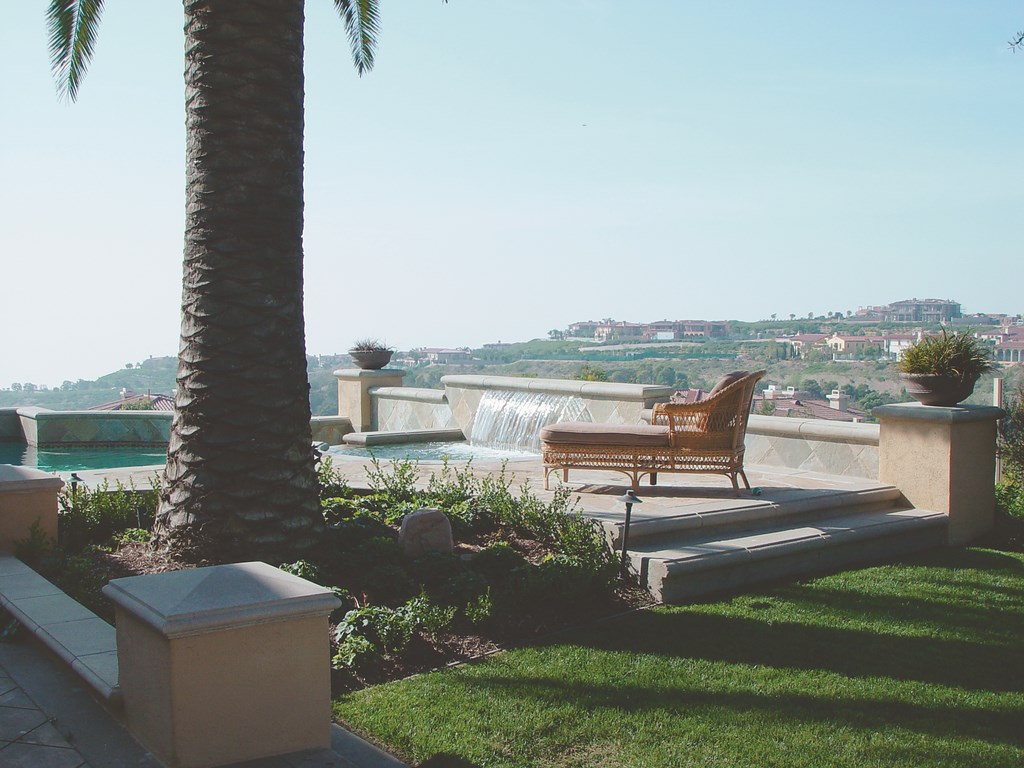 The shallow end of the pool was set at grade by the family room entrance and side walkway. As the lot slopes up toward a walkway on the other side of the yard, the hardscape passes through a series of concrete terraces, planters and swatches of lawn. Each terrace level’s configuration is determined by underlying topography, and the various elevations are highlighted by changes in materials.

These variations in materials and looks create the illusion of changing environments with each step up or down from one level to another. And because the variations are handled with the designer’s deft touch and sense of colors and textures, it all hangs together visually.

But all those benches, sections, levels, terraces and transitions had to be specified and built – and that’s where we enter the story.

Pedersen’s eclectic plan aligned perfectly with the clients’ desires, but the various angles, shapes, styles and textures brought their share of trouble to us in turning the vision into reality.

In other words, we were left to incorporate the proper colors and materials to complete the design experience and make it work. In addition, we had to figure something out for the pool, whose silhouette wasn’t conducive to swimming for any distance and whose entry steps seemed to get in the way of fun and splashing. We made some suggestions based on our observations and moved forward.

The level changes along the pool’s coping created another technical problem, as it meant the bond beam would have to change levels many times. The slate on the high walls at the back used 12-by-12-inch pieces, so that space filled up nicely. But as the beam dropped, there was room left for just a single line of 6-inch waterline tile that had to stand on its own while complementing the slate triangles. 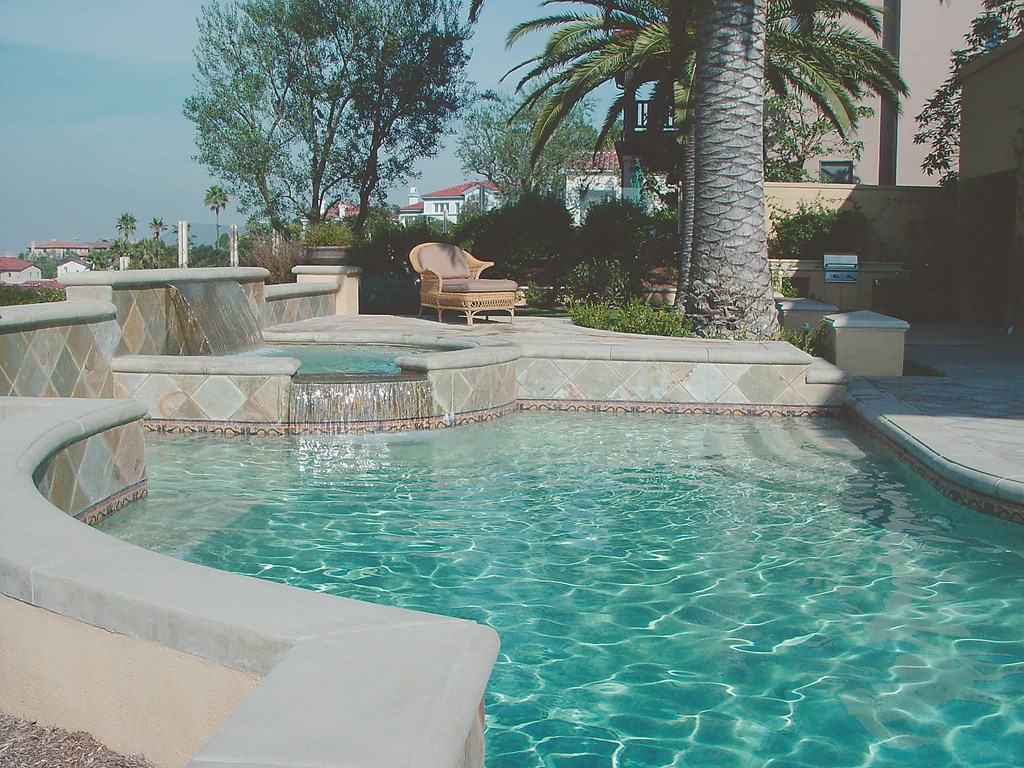 We elected to break away from the linearity and go with a pattern of curves and swirls to contrast with the stone on the seating wall and the other raised sections, flowing with the contours of the shell rather than with the slate’s angularity.

Softening the angles further, we set up a cascade that sheets from the top wall into the spa and flows through the spa spillway before falling into the pool. The result is a diversity of vertical walls at various levels playing off the unusual flow of the pool/spa combination – all within the scope of what the customer wanted to do with the available space.

As we plotted our course with this project, Pedersen stayed in steady contact and asked us questions that which sharpened our ideas as well as his understanding of the constraints under which we were working. Once again, it was a two-way street: If we ran into something that moved us away from an agreed-upon concept, we’d call him to discuss the specifics and reach a sensible conclusion that fit within his vision.

Confidence and trust that move in both directions from designer to contractor and back again are what this collaboration is all about, and it’s a working relationship we treasure. The way we see it, we’re all working from our strengths – his as a designer who understands what construction is all about, ours as contractors who buy into design concepts and turn vision into reality.

Randy and Martha Beard own Pure Water Pools, a construction/service firm in Costa Mesa, Calif. They met in 1981 while both were working behind the scenes in the entertainment unit at Knott’s Berry Farm. At the time, Randy also had a small pool-service business and convinced Martha (Marti) to invest in expanding the route. They purchased Pure Water Pools from another technician and have operated in the Costa Mesa/Newport Beach ever since. As the route grew, both dropped their other jobs and focused entirely on the pool business as small repairs led to big repairs, big repairs to remodels, and remodels to new construction. Each year, they’ve seen their projects become more creative and technically challenging. Today, the firm works with many of the area’s leading architects and landscape architects to create a range of custom watershapes for upscale commercial and residential clients.