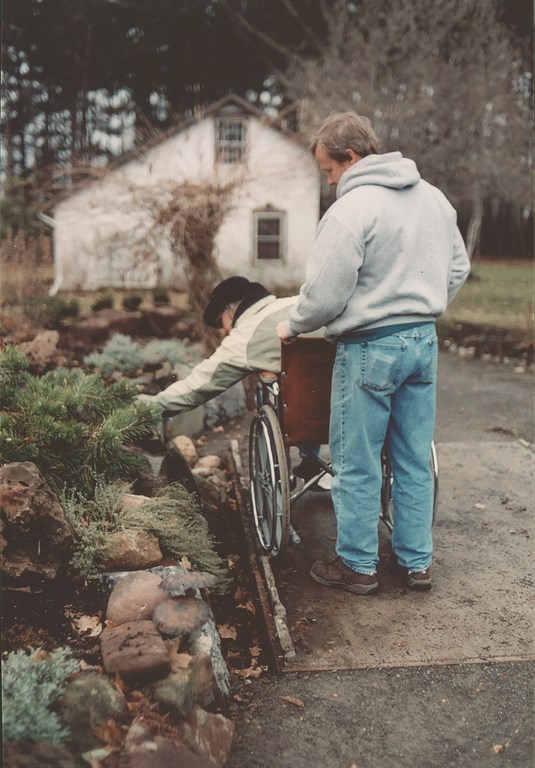 The process of designing a watershape or garden usually requires the designer to answer a number of questions – the vast majority of them having to do with seeing the water and the landscape. Indeed, from considerations of color and scale to managing views and ensuring visual interest within the space, much of the designer’s skill is ultimately experienced by clients and visitors with their eyes.

But what if your client is blind or wheelchair-bound or both? How do you design for them? What colors do you use in your planting design? Would you even care about color? How will they move through the space and what experiences will await them? What would be the most important sensory evocation – sound, fragrance or texture?

These are the sorts of special questions we asked ourselves after being approached by clients who had the desire to create a sensory garden for visually impaired and physically handicapped people. The experience shed a whole new light on the power of non-visual aesthetics and prompted me to consider the art of watershape and landscape design from an entirely fresh perspective.

The clients saw the project as a fitting memorial to their recently deceased daughter, Sharon, who had lived her life blind and in a wheelchair.

In our conversations with her parents, we learned that despite these handicaps, Sharon had loved being outside and spent a great deal of time experiencing the myriad textures and fragrances of the plants in the family’s garden. She loved the feel of water running over her hands and of the rain falling on her face, and she’d spend tremendous blocks of time experiencing the fuzziness of lamb’s ear or smelling the fragrance of lavender as she rubbed her hands through it.

In her honor and, more important, for the benefit of others who live with similar challenges, we were charged with designing a garden that worked across all of the senses. The space that would become “Sharon’s Garden” was to be placed in a 60-foot-square area behind the Nature Center at Mendon Ponds Park near Rochester, N.Y.

By design, it’s a pleasant enough place to enjoy visually, but it is actually one that is more truly appreciated with eyes closed and mind opened to the information received via ears, nose and skin. 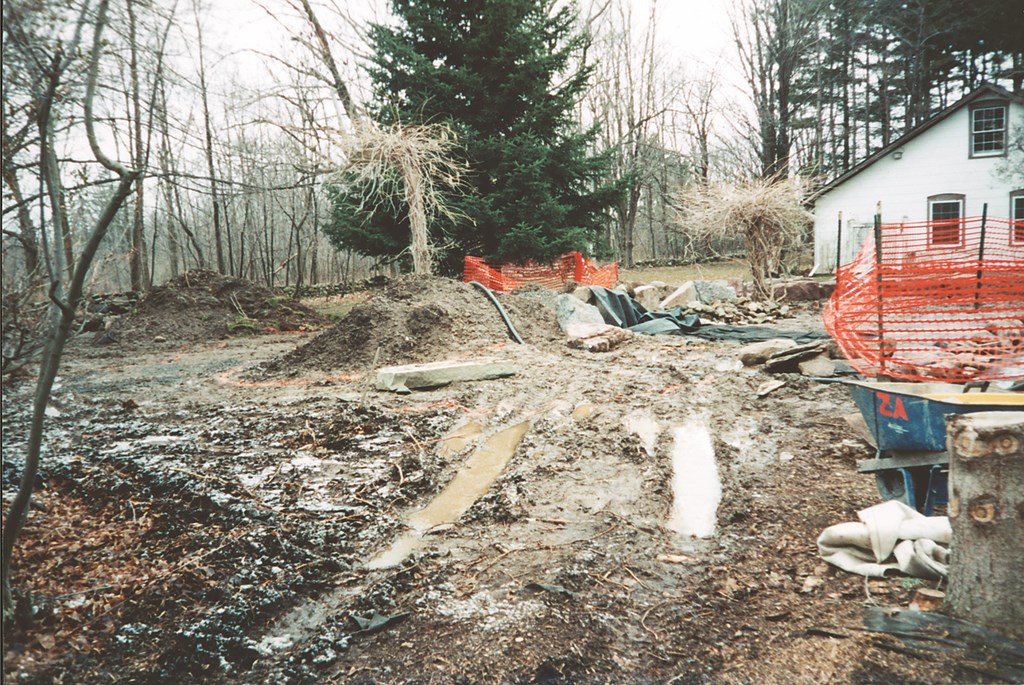 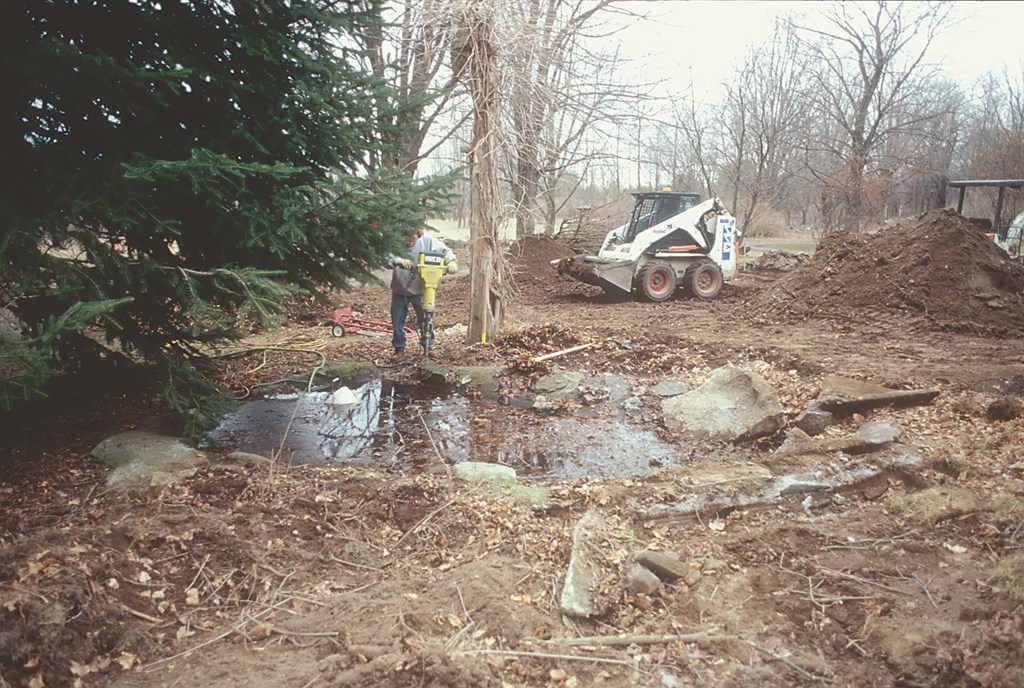 At first, the notion of setting up such a space was intimidating, but once I was able to open my mind to the possibilities found in the non-visual senses, the ideas flowed like a waterfall. This was fortunate, because there weren’t all that many precedents for us to study: In fact, we found fewer than a dozen so-called “sensory gardens” in all of the United States. So instead of turning to others for inspiration and guidance, we started from scratch and had to imagine what it would be like to move through a garden without being able to see it.

Immediately and obviously, we knew that the space would need lots of texture and extremely fragrant plants. We also knew right away that the space would require raised gardens areas in which plants and rocks would be readily within reach of those in wheelchairs. And we knew as well that the sound and feel of cascading water would be a big part of the overall program.

In similarly basic ways, we knew the garden would need pathways wide enough for people in wheelchairs and those on foot to navigate, comfortably and together, in an unhurried, relaxed and relaxing way.

These basic observations led us directly to the first of several significant design decisions: the garden’s planting areas were to be raised in beds lifted by five different types of stone – dolomitic limestone, granite, Medina sandstone, Laurel Mountain stone and cobbles. Not only did these species offer a variety of textures, but they kept us in touch with the fact that sighted people would also use this garden.

In these raised spaces, we ended up using a range of plants selected for texture or scent or both (for details, see the sidebar at right). We staged and arranged each to provide subtly shifting experiences for those lingering on the pathways.

Once on site with a solid game plan, the first thing we did was to remove an existing garden and pond that were decidedly not accessible to the handicapped or visually impaired. A wet spring made for muddy work as we removed old timbers, plantings and a concrete pond. The pond’s shell wouldn’t hold water and wasn’t salvageable, but it was still strong enough that we needed a jackhammer to break it up.

Once the site had been cleared, we graded the area with a new set of contours and began the work of laying out the walls and watershapes.

The waterfall is the garden’s centerpiece. It drops about 18 inches from a concealed point of origin, and then cascades down another 24 inches over a flat slab stone and on into a stream. We didn’t have a great deal of space to play with, so the stone structures aren’t particularly elaborate. Instead, we focused on sound and touch and on crafting a waterfeature scaled to its surroundings.

The stream runs across a walkway and into a pond positioned near the building. The pond is 12 inches deep – sufficient to support water plants, but not deep enough to pose dangers to any children who might end up playing in what is, after all, a public garden. As an added safety measure, the pond itself is set about three feet back from the edge of the pathway to avoid accidental immersions of those in wheelchairs.

The path was built up using a base of crusher run over fabric, topped with stone dust. We knew that with proper compaction and a bit of water, the stone dust would harden to about the consistency of concrete – but would be much less expensive. This hard surface allows wheelchairs to use the pathways without any danger of sinking into the ground. In addition, the paths have a stone edging to keep wheelchairs from rolling into the gardens.

For stability, all of the slab, boulder and cobble walls are set on bases of crusher run and were backfilled first with crushed stone (for proper drainage) and then with a mix of screened topsoil and compost. The walls were also backed up with landscape fabric that will allow water (but not soil) to filter through.

Once the walls had been built and the watershapes were up and running, we borrowed a wheelchair and asked a representative from the Monroe County (N.Y.) office responsible for local administration of the Americans with Disabilities Act to traverse the garden with us.

We rolled up to the edges of the slab walls and reached out to “touch” the not-yet-installed plantings. We crossed the bridge over the creek bed and put our hands in the waterfall. We backed into a special wheelchair “parking space” we’d set up in the Medina sandstone wall – a placed where a visitor is surrounded by plantings on three sides.

When we reached, turned and bumped into the stone and generally satisfied ourselves (and the ADA representative) that what we had here was not only going to be a beautiful garden for those who see, but also for those who could not see or walk, we knew we had passed a crucial test with flying colors. 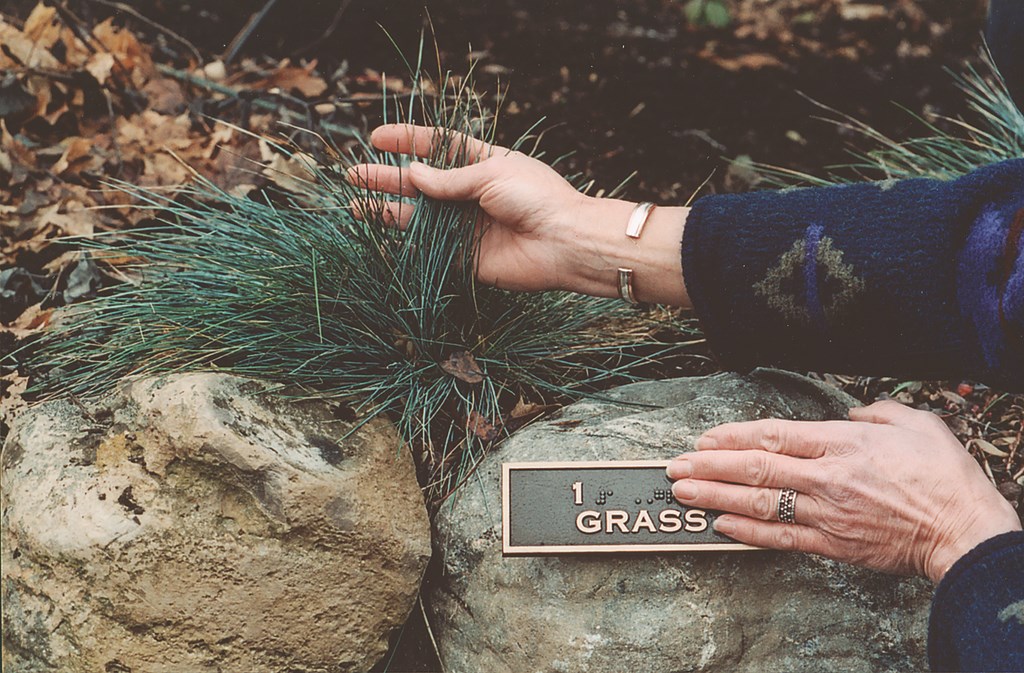 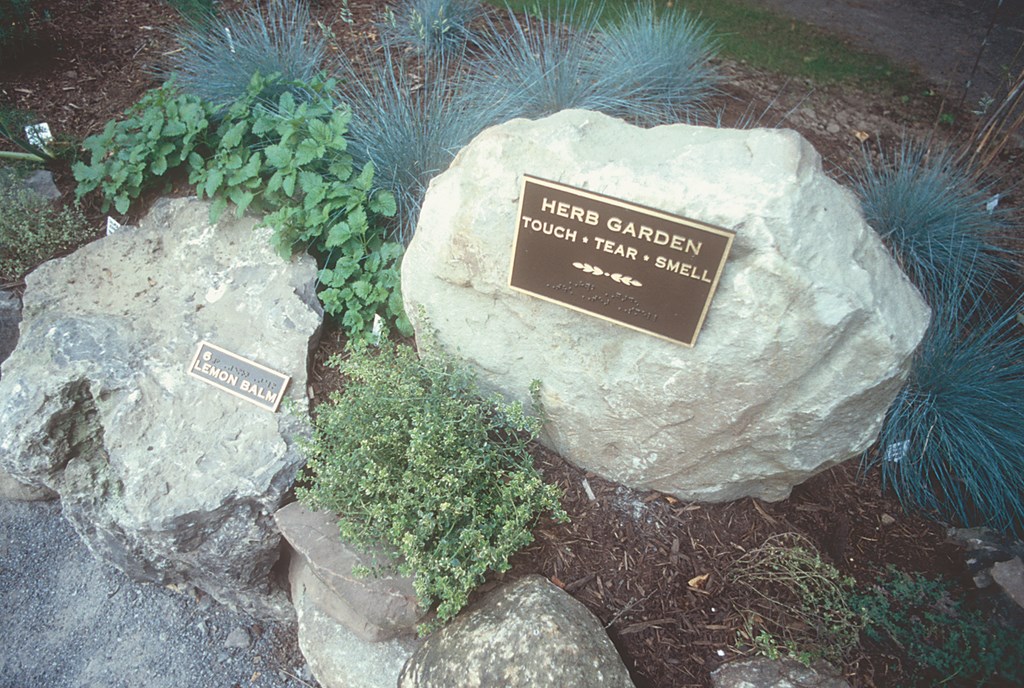 So we continued with construction and prepared the beds for planting. As proud as we are of the physical structures and waterfeatures, the real stars of Sharon’s Garden are the plants: more than 170 linear feet of raised beds incorporating more than 75 varieties of plants including summersweet, fragrant viburnum, Virginia sweetspire, Miss Kim lilac, butterfly bush, astilbe, fragrant hosta, geranium, Lamb’s Ear and much more. The herb garden alone features nearly two dozen species: three kinds of thyme, lemon balm, tarragon, lavender, rosemary, oregano and three kinds of sage, to name just a few.

It is indeed quite a symphony. Ornamental grasses and bamboo practically beg to be caressed, and unlike most public-garden spaces, visitors are actually encouraged to rub the plants, smell them and experience their textures and scents. Important to the garden is the inclusion of 20 brass nameplates that identify a selection of plants in both English and Braille. A custom-made mailbox holds literature describing these plants, again in Braille as well as English.

Once the garden was complete, a ribbon-cutting ceremony attended by the leadership of Monroe County and other local dignitaries was organized.

Local television crews and newspaper reporters were on hand and recorded possibly the best public-relations coup the new facility could have scored: the arrival of a blind couple who had heard about the garden and had showed up with perfect timing just before the news conference began. 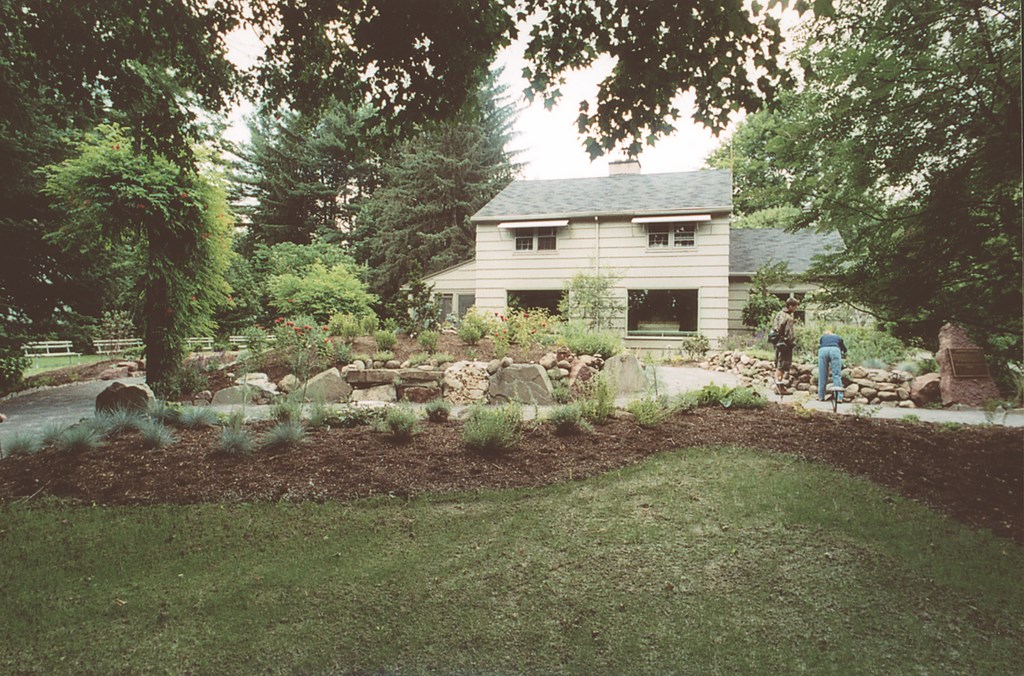 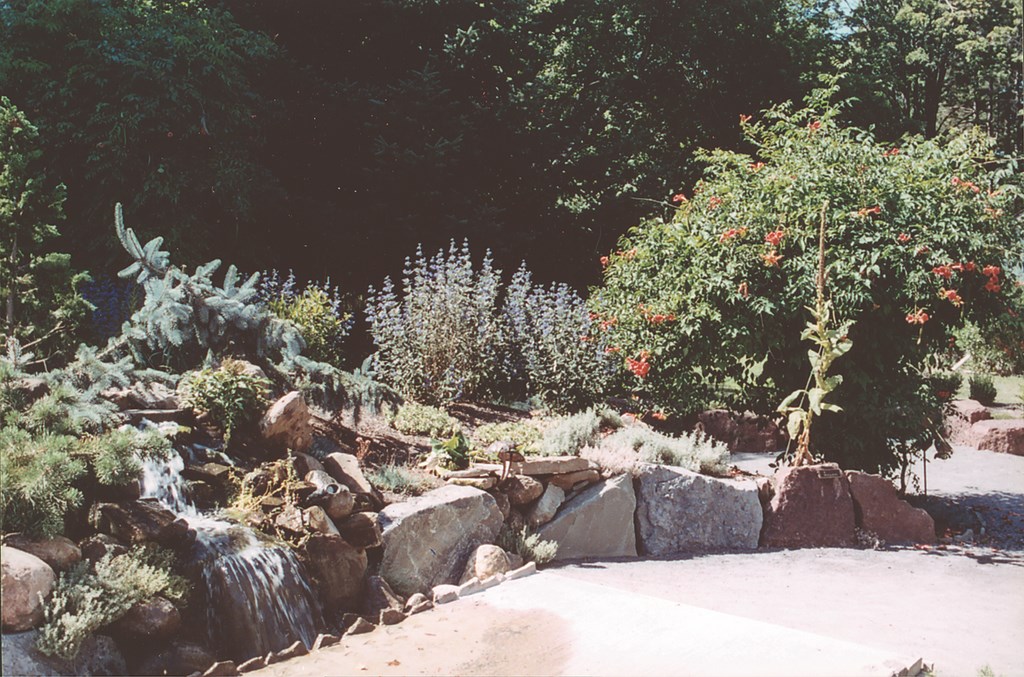 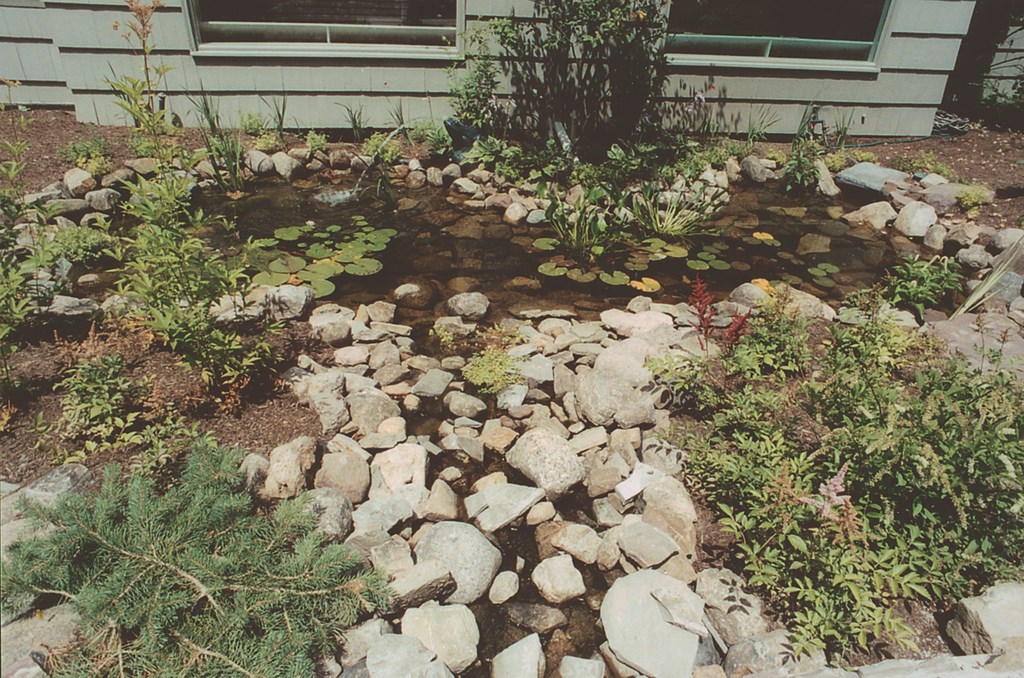 As the couple felt their way around the garden, touching the plants and then feeling the Braille identification signs, I don’t think they noticed that about fifty sets of eyes were following them as well.

We were all transfixed as they touched and smelled the plants, easily navigated the pathways and eventually came upon the stream. As they made their way around the garden, enjoying the beauty of nature in a welcoming setting, we knew in an instant that the six weeks of working through rain, snow, mud, aggravation and worry about finishing on time had all been worth it and that Sharon’s Garden would be all we had imagined it could be.