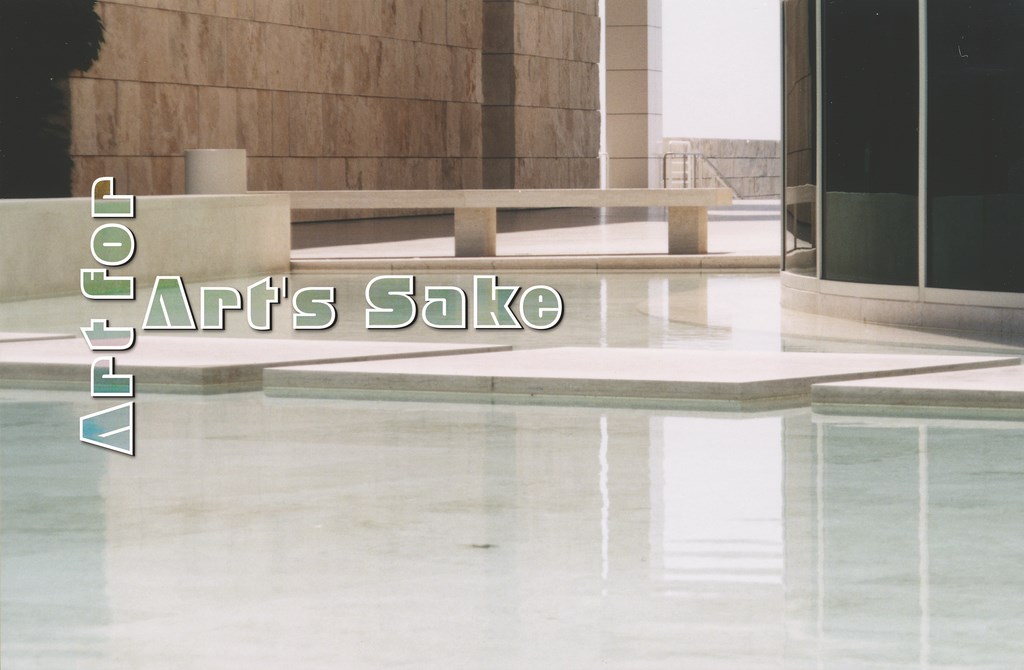 The Getty Center is a true multi-media experience: imposing architecture, lots of people, incredible materials of construction, amazing views, diverse spaces, rich and varied sounds – and it’s mostly all a bonus, because none of this has much to do with the Los Angeles center’s core functions as museum and research institution.

Designed by architect Richard Meier, the 750-acre campus is dominated by outsized structures wrapped in travertine, glass and enameled aluminum. It’s all a bit cold (maybe time will soften the sharper edges and reduce the glare), but the smaller spaces in between the angular buildings will always make warm impressions, including Meier’s compact watershapes, fountains and reflecting pools; the gardens by landscape architect Laurie Olin; and, in particular, the central garden and watershapes created by artist Robert Irwin.

There are enough creative uses of water here to make the Getty Center a worthwhile stop for any watershape designer or builder – and a Mecca for those motivated to explore ways of using water’s full range of sounds and its sheer visual energy to bring comfort and intimacy (as well as rich, artistic symbolism) to spaces large and small.

In approaching the center, you get an immediate visual and auditory reward: Off to the left of a grand entry stairway stands a line of a dozen or so vertical jets of water framed in arches of carefully trimmed greenery.

In what is otherwise an austere, gleaming modernist space, the framed jets offer a warm classical reference – a use of a familiar stylistic vocabulary that puts visitors at ease even if they aren’t conscious of the watershape’s references to the Alhambra in Spain or the Villa d’Este in Italy. 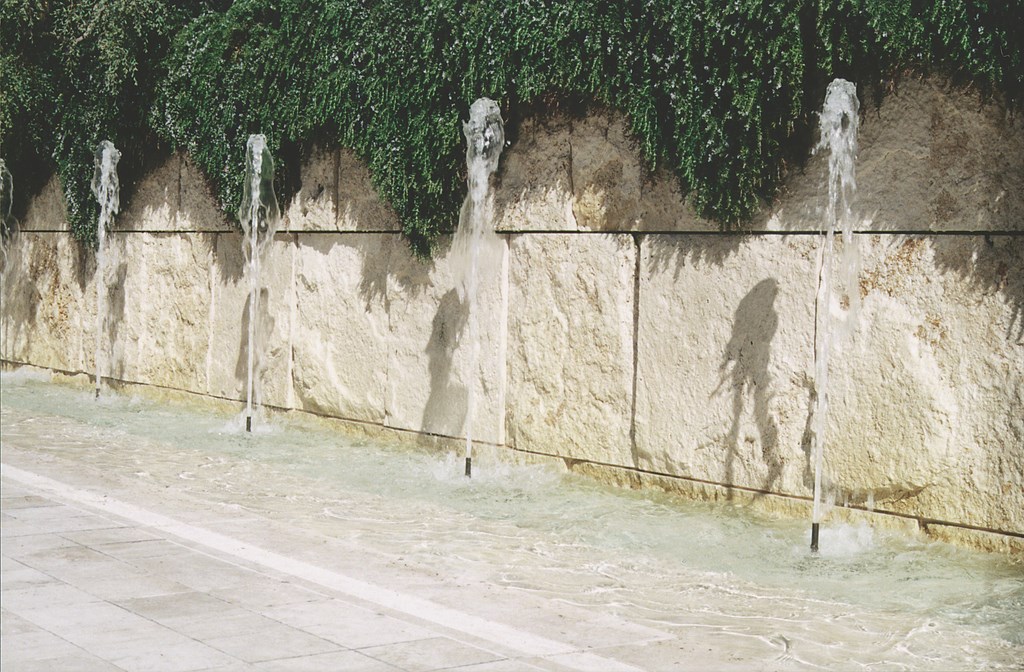 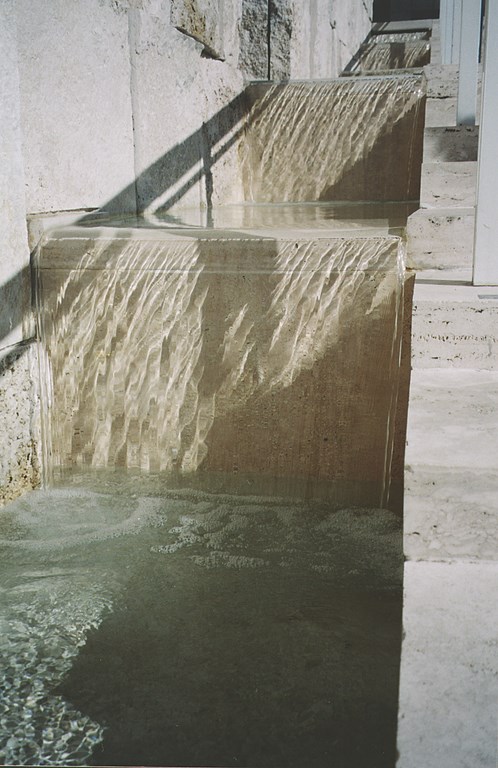 Around the corner on the stairway is a modernist version of a Renaissance water chain, falling from the top level all the way along the left side of the stairs and flowing around the corner to the greenery-arched jets just mentioned. It’s a source of aural comfort in a noisy, busy space – although I wish the safety railing could come down and let it be more of a visual (and photogenic) treat as well.

Room with a View

The courtyard of the main gallery complex offers another evocation of Renaissance Italy in the long reflecting pool lined on one side by Mexican Cypress trees. This time, water jets reach gracefully across the pool, their arcs and splashes serving to cool the air for visitors seated at café tables or walking through the plaza.

There’s also a trapezoidal reflecting pool that wraps snugly around the entrance to one of the galleries. The fountain/sculpture at the pool’s leading edge is a bit ungainly, with large jets of water rising artificially (and awkwardly) among and above large, rough boulders. But taken here in contrast with the carefully shaped travertine found just about everywhere else on the campus, the boulders and jets make a knowing statement about our shaping of the environment that is echoed again and again in spots all over the Getty Center. 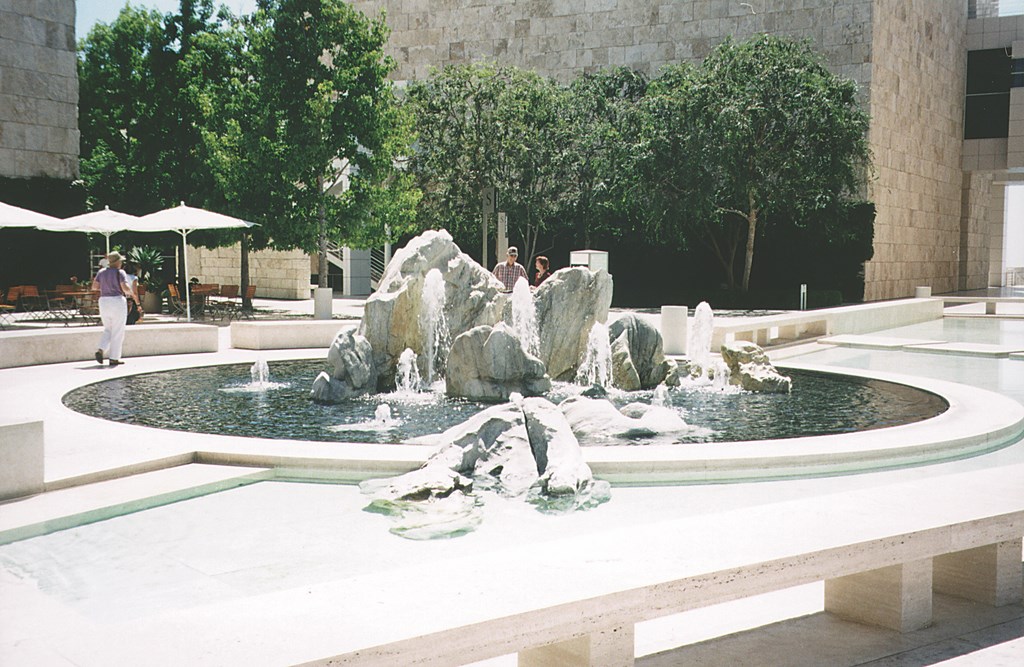 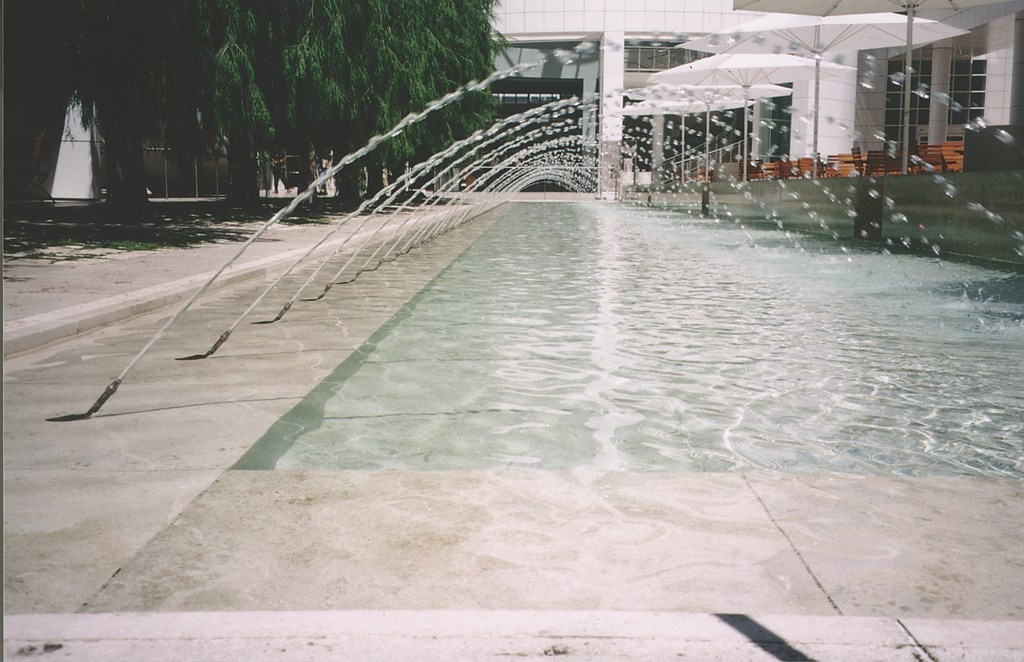 As for the reflecting pool itself, the floating pads (seen at the start of this article) seem to have been intended as a walkway between galleries. Unfortunately, safety concerns appear to have struck once again, mandating the placement of benches to keep people from experiencing the water in more intimate and encompassing proximity. In my mind’s eye, however, I prefer to see this pathway as I think it might have been.

Just outside the gallery complex, you encounter a round, polished, turret-like structure. When you peer into the turret, you see a tiny pool of water that wells up in a central cylinder and overflows down an incline into a thin, elevated gutter that runs the length of a very long, narrow space. 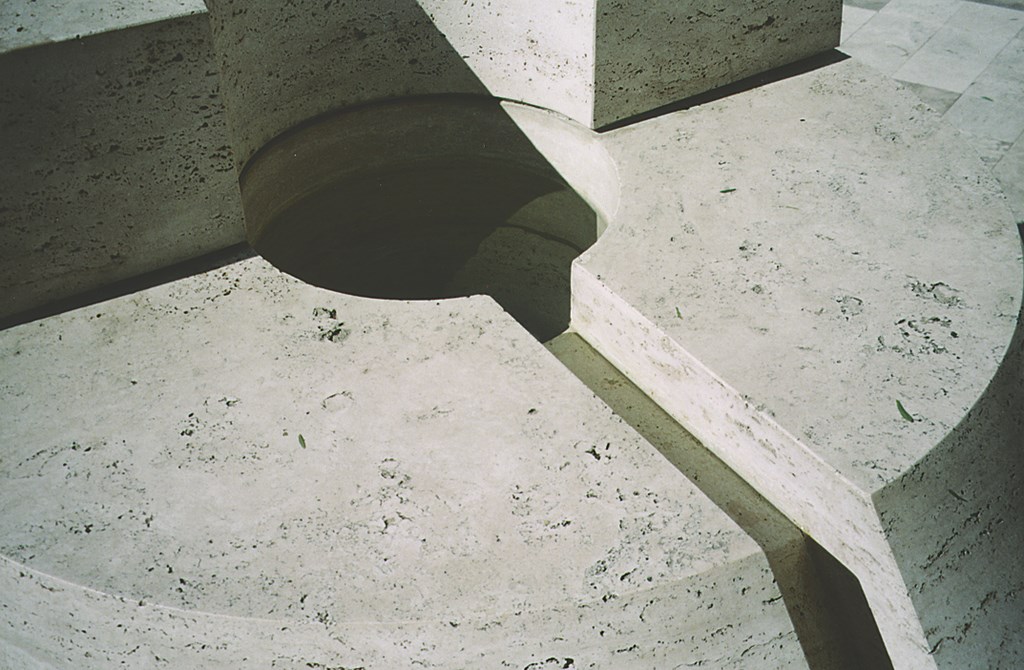 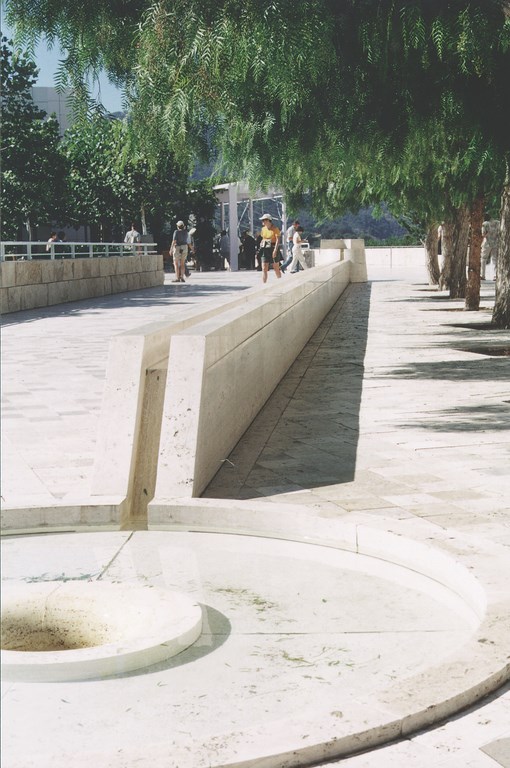 At the far end of this austere form, the water drops down another ramp into a larger bowl with a hole in its center into which the upwelling water eventually and very gradually flows. This isn’t the end of the experience: Rather, it’s a window that invites you to a scene that unfolds below.

Leaving the upper terrace, you emerge into a space where the water from the turret eventually flows down along the rough walls of a droplet-shaped niche and into a large catch basin. As you absorb impressions from this unusual and unexpected scene, you hear water flowing in the space opposite the basin.

This is where Robert Irwin begins to work symbolic magic and the serious watershaping begins: Opposite the suggested watershed of the droplet-shape niche – and built upon the mere trickle of liquid from above? – a stream now begins flowing in earnest. You can hear it at the head of the garden, but you can’t see it: Large boulders obscure any clear view of water, and you are driven to enter a zigzag garden path to satisfy your curiosity and find out what the water is doing amid all the trees and greenery. 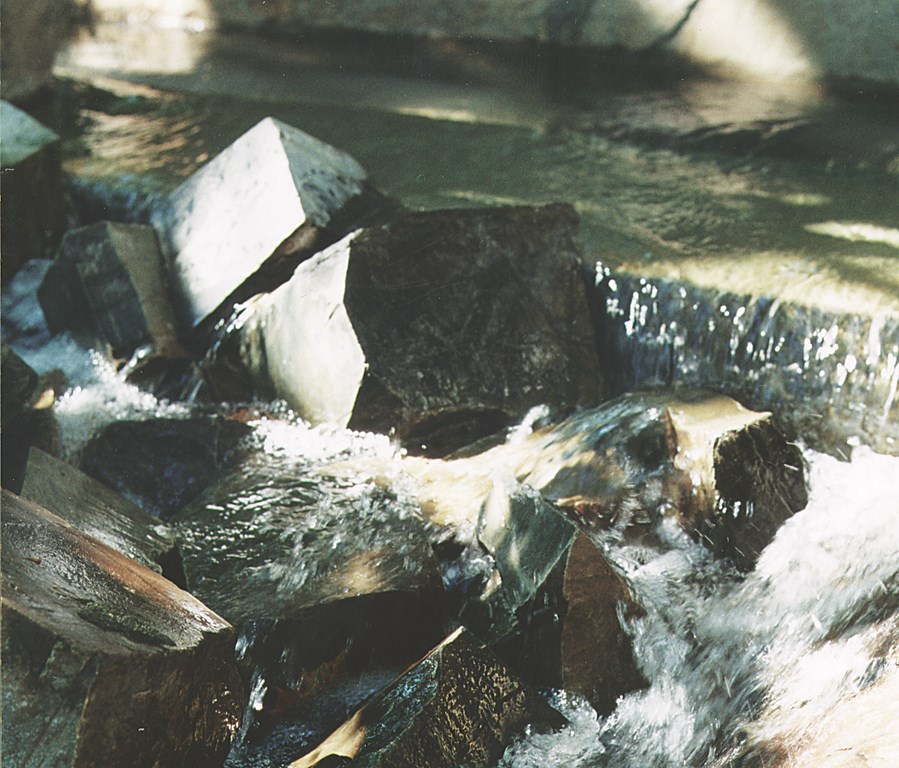 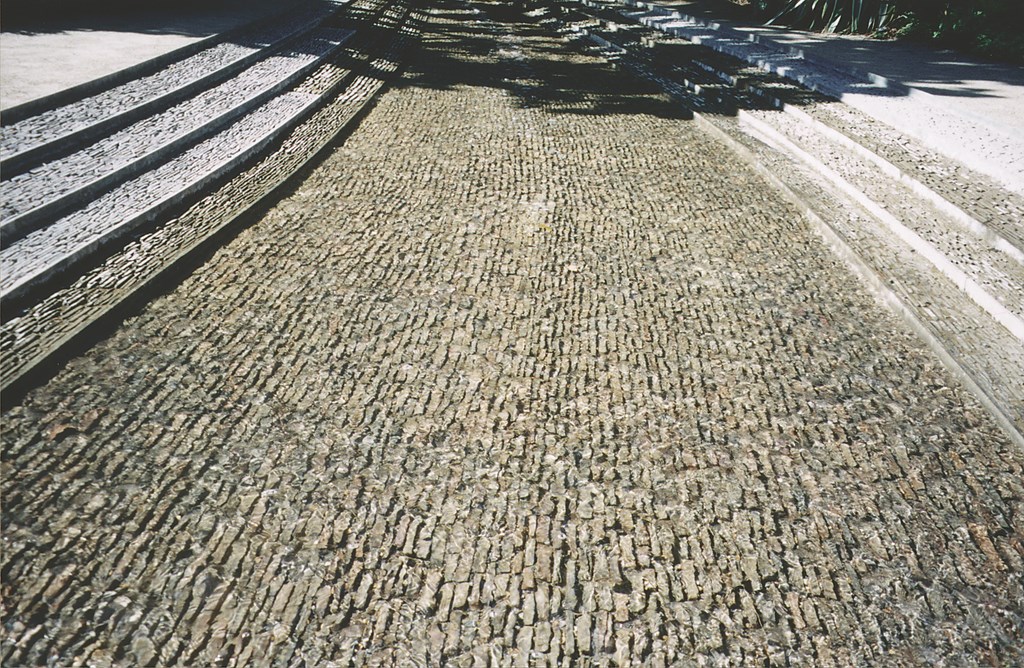 Inside the wooded area, it’s all about control: mastery of where the water flows, of how it sounds, of its volume and speed, of the width or narrowness of its channel, of the materials and artful surfaces over and under which it moves and how these design decisions color our perceptions. Ultimately, we’re invited to see the composition as symbolic of human interaction with water and the hydrological processes that make life possible in the desert vastness of Los Angeles.

A Basin within a Basin

The stream becomes a swift, shallow river as it bisects the zigzag garden and then ends with a whoosh, crashing down a stepped spillway into a maze of tautly manicured hedges. It completes the imagery of human control of the environment in the most elegant of terms – a sculpted basin on a hilltop overlooking the architectural sprawl of the Los Angeles Basin below.

To get close and enjoy the basin itself, you must follow another zigzag path, this one curved rather than linear – but this time, the transit takes place in bright, open daylight rather than in the cool shadows of the trees (as occurs upstream, closer to the wellspring). 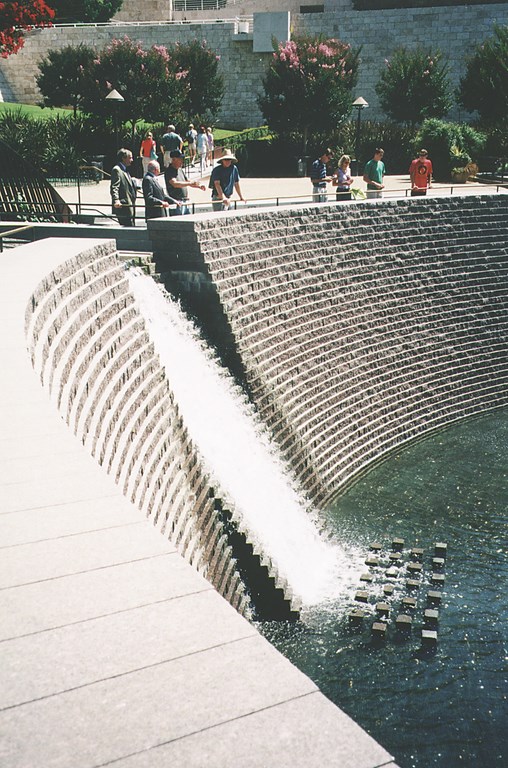 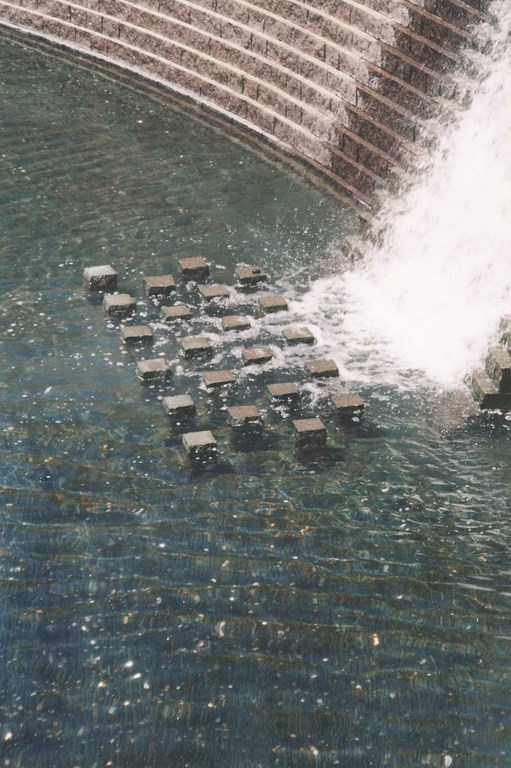 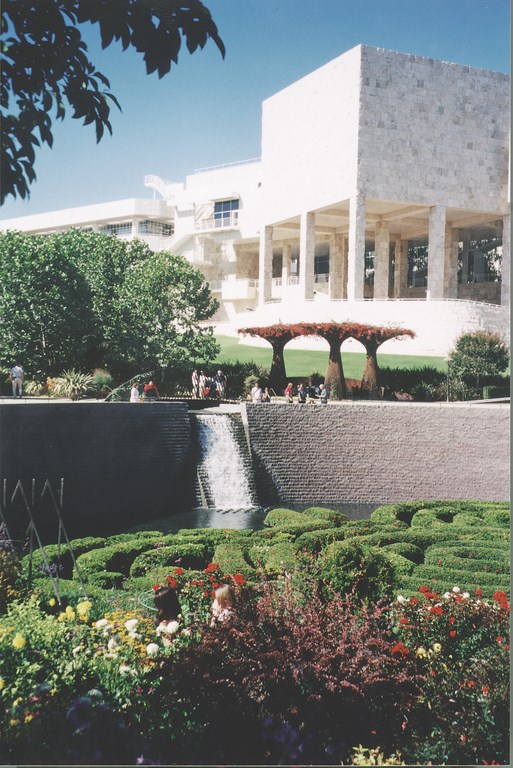 Irwin adds a final element of control here, using a set of standing stones at the foot of the cascade to slow the water and attenuate its flow as it moves into the garden maze. As you watch the cascade spread out in tiny, almost indiscernible ripples, it’s difficult to avoid thinking about the trickle out of the well on the upper plaza and how water moves through the system to create variously compelling effects of sight and sound.

It’s a magnificent, three-part composition – and the most engaging of the must-see features of this new Los Angeles landmark.

Jim McCloskey is publisher of WaterShapes and president of McCloskey Communications, Inc., a Woodland Hills, Calif.-based producer of trade magazines. A 1977 graduate of the University of California at Los Angeles, he majored in English literature and minored in art history, with a focus on architecture. He began a career in magazine publishing in 1979 and from 1987 until 1996 was editor and associate publisher of a leading publication for the pool and spa industry. Through the years, he has started or guided the start of eight scientific and technical trade magazines, including Architectural Lighting.