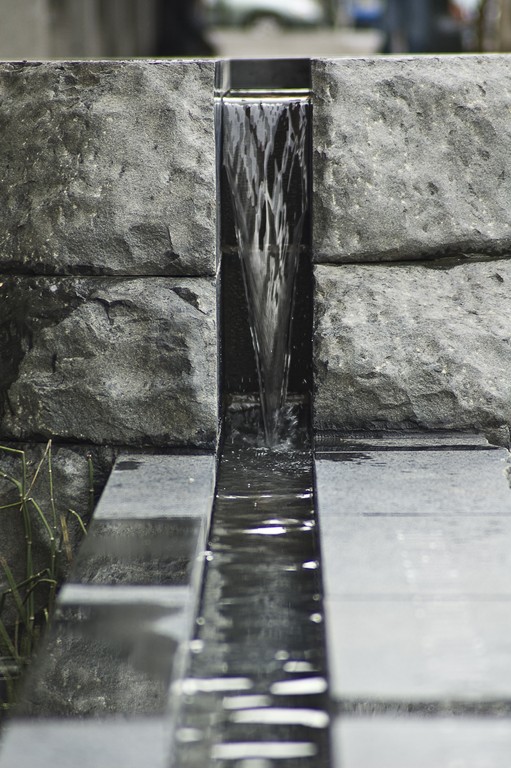 Our involvement with Vera Katz Park started with a phone call from Alan Beard of GBD Architects, a firm that has been responsible for designing several signature buildings in Portland, Ore.

The project at hand was the complex renovation and transformation of the city’s National Guard Armory into a modern theater and the new home of the Portland Center Stage Theater Company. After an energetic interview process, we were selected to design the site’s landscape.

We were enthusiastic about the project from the start. The sidewalk area we were designing is an integral part of the redevelopment of what’s known as the Pearl District, a former industrial area now being revitalized with mixed-use buildings and high-rise developments. At 200 feet long by 20 feet wide, the space presented an interesting design challenge in an area much in need of parks and public places.

The city’s goal is to establish pedestrian connections throughout the neighborhood while creating a sense of community within the district. For our part, we saw the site, which was to be named in honor of former Portland mayor Vera Katz, a devoted supporter of the arts who had been instrumental in the repurposing of the Armory Building, as an opportunity to create a

Our goals were clear: to generate a design that would best use the available space to reflect the character of the site; to aid the city’s plan by providing a gathering place for the community; and to create an artistic statement.

The park runs along the north side of what is now known as the Gerding Theater, which features a distinctive red brick façade over a striking base made up of large, dark basalt blocks. The land slopes about 10 feet from end to end, with its high point at the theater’s northwest corner.

Given the long, narrow nature of the site and the limited amount of space available for programming, my immediate idea was to work in linear forms. The park needed to offer plenty of room for pedestrian traffic and seating, so I knew any watershape would need to combine functionality with a refined sculptural form.

In effect, these physical limitations helped to shape the design’s key features – and happened to play directly to our strengths: As we see it, successful design is as much about the creative editing of concepts as it is about devising those concepts in the first place. For us, this editing phase is crucial to the design process, and it certainly played a role here. 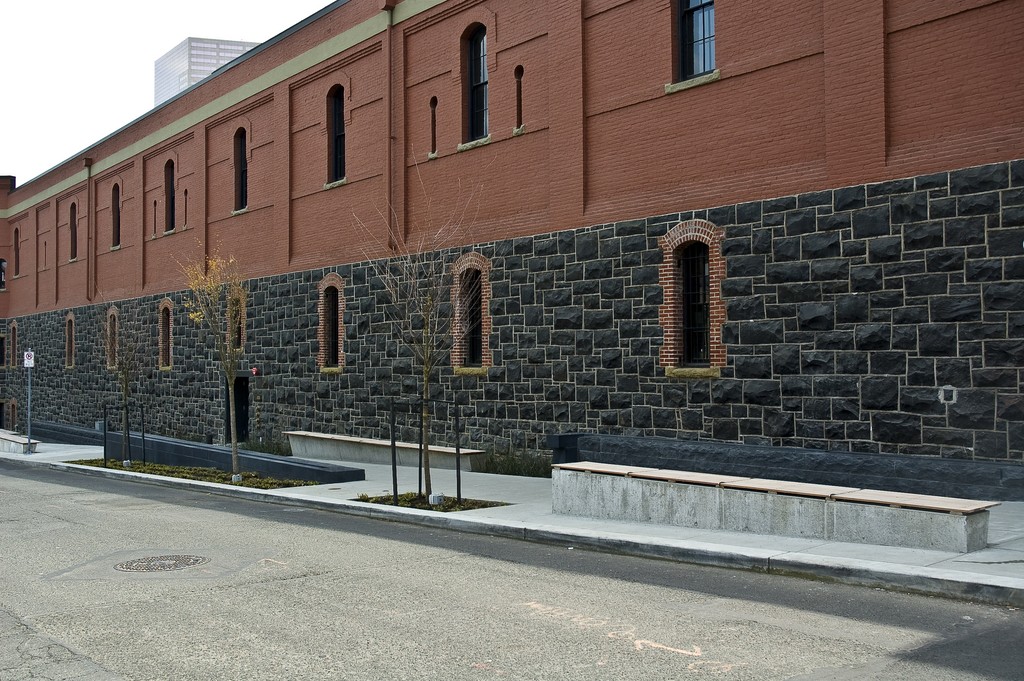 For this park, we were working with a space that would serve all of its intended functions only if we approached it as a minimalist expression. What was required was a measure of simplicity complemented by a few carefully chosen contrasts that would provide impressions of strength, variety and beauty.

To achieve this in built form, I found it necessary to limit the range of elements we considered and then made choices based upon those concepts that survived the editing process. To be sure, this sort of simplification is generally much easier to pursue with large-scale projects than it is with a small project such as this one: In narrow, linear confines, every decision is very much on display, which adds a great deal of self-imposed pressure to the challenge of creating what is to be a well-used public space.

Rather than compete with the immensity of the building’s walls – the massive, rough-hewn blocks of deep gray basalt are mortared in uneven patterns at the base – our design contrasts with them to create an engaging visual play.

Given the dominance of the north wall, it made sense to use a narrow channel to accentuate the building’s appearance as well as the park’s length. Our idea to fill that channel with water also stemmed from this thinking. Concurrently, the park’s slope inspired us to establish a series of runnels and troughs that would be terraced to rise above grade and thereby would allow portions of the runnel walls to serve as seating. The design also uses stone materials that harmonize with the basalt, taking maximum advantage of its strong, stoic gray tones.

It is important to note that this is not a traditional park space by any means: There are no lawn areas or picnic tables or play areas; rather, this urban space is a band of sidewalk marked by linear stone walls, custom benches, strips of plants and a flowing watercourse.

The black basalt we selected for our watershape was provided through Yellow Mountain Stoneworks of Seattle from quarries in southern China. In all, we used 30 tons of stone, and a number of the larger pieces were shaped in China before being shipped to the park.

Yellow Mountain Stoneworks’ John Williams was very supportive throughout the process and went well beyond the normal role of “supplier.” He often worked with me on site, tools in hand, sculpting and reshaping many of the pieces once they arrived. It was a necessary step: As precisely architectural as the work was in the planning and acquisition phases, many key aesthetic decisions were improvised on site – a process in which Williams was a significant collaborator. 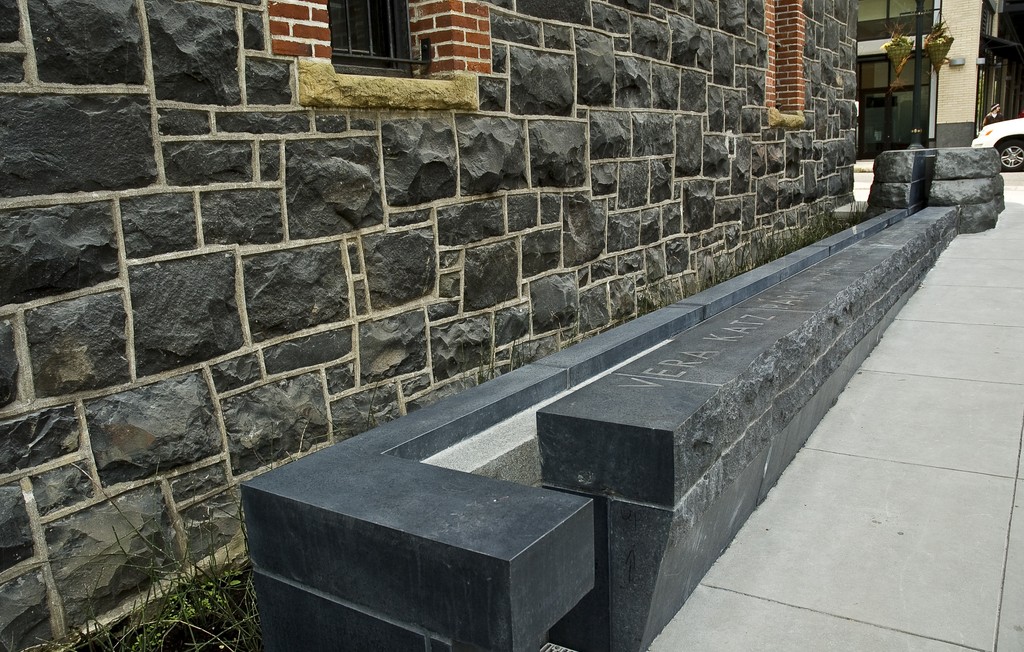 Much of that improvisational spirit was made possible by the fact that, although the runnel structures appear to consist of large, monolithic pieces, they are actually made of formed concrete bases and beams veneered with basalt panels anchored to the support structure by tie rods.

An exception to the veneered approach is the three-layer stacked “source stone” we positioned at the highest point of the park. For a composition such as this one – overtly architectural and sculptural in appearance – we made no attempt to conceal the headwaters, as we would have done in a more naturalistic setting.

In fact, we celebrated the artificiality of the water source in a sculptural statement, adopting a circular motif seen in some of the theater’s old windows and architectural details. The result is a circular, core-drilled welling pool in the center of the source stone that rises to flow through a channel cut to the bush-hammered edge of the large, oval-shaped basalt slab. This juxtaposition of shapes and textures draws attention both to the well and the rough character of the surrounding stone – a contrast I often seek in my designs. 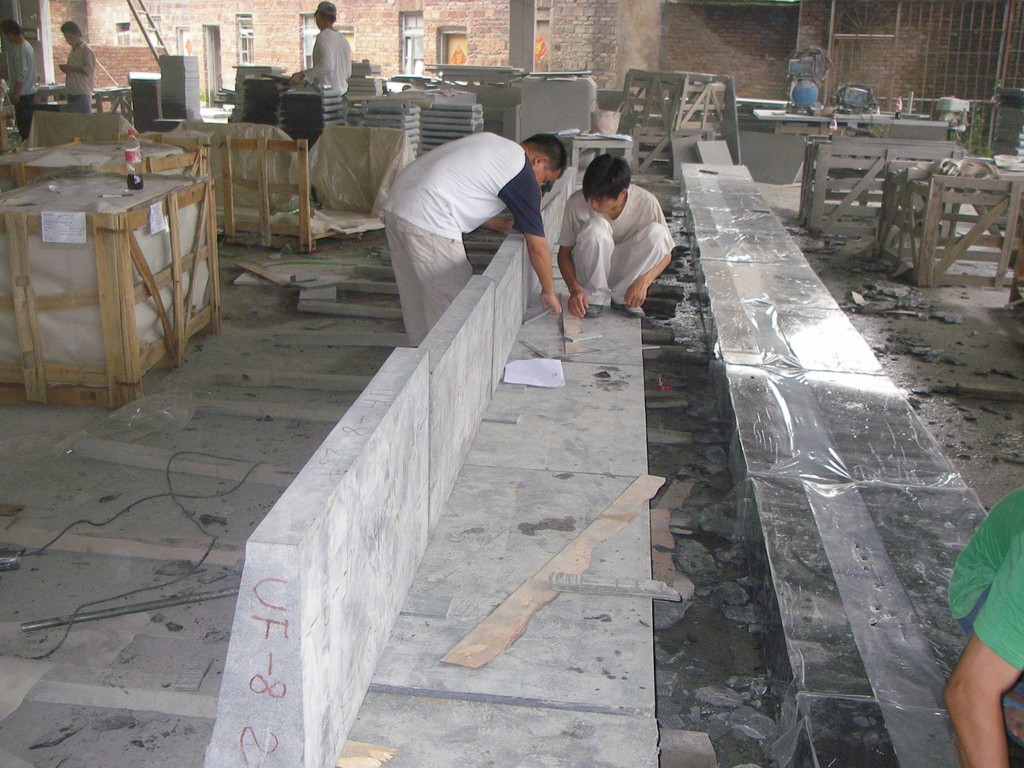 Water flows from the welling pool down through the channel of the source stone and then down over two additional layers of stone. We’d considered using a monolithic piece of stone for this section of the feature, but limits in the thickness of material the quarry could supply modified our choice.

In the end, we decided that the layered approach made a stronger statement. Indeed, the three layers of the source stone preview the three levels of the runnel system, setting up echoes that resound through the park. In addition, the stacked source-stone structure suggests the water tables and cisterns found in many Japanese gardens – a design tradition that has always been a major influence on my work.

Throughout this process, Williams continued to be an invaluable contributor to the project. Once we settled on the basalt material, he and his staff worked closely with the Chinese quarry and arranged for preparation of full-scale mock-ups. These were photographed and approved by us before anything went into the shipping crates. The routine worked well, but we did need to modify some pieces once they arrived on site.

The three troughs that constitute most of the waterfeature’s 120-foot course each have different lengths and distinctive finish treatments. The three transition points are treated individually as well in order to maintain interest along the feature’s entire length.

The troughs themselves are narrow at just six inches wide and three inches deep, featuring slow, gentle water flows. In fact, the entire system contains only a few hundred gallons – just enough to fill the area with the sight and sound of moving water. This part of the composition is based upon contrast as well and the juxtaposition of delicate water flows against the ponderous visual and physical weight of the stone. 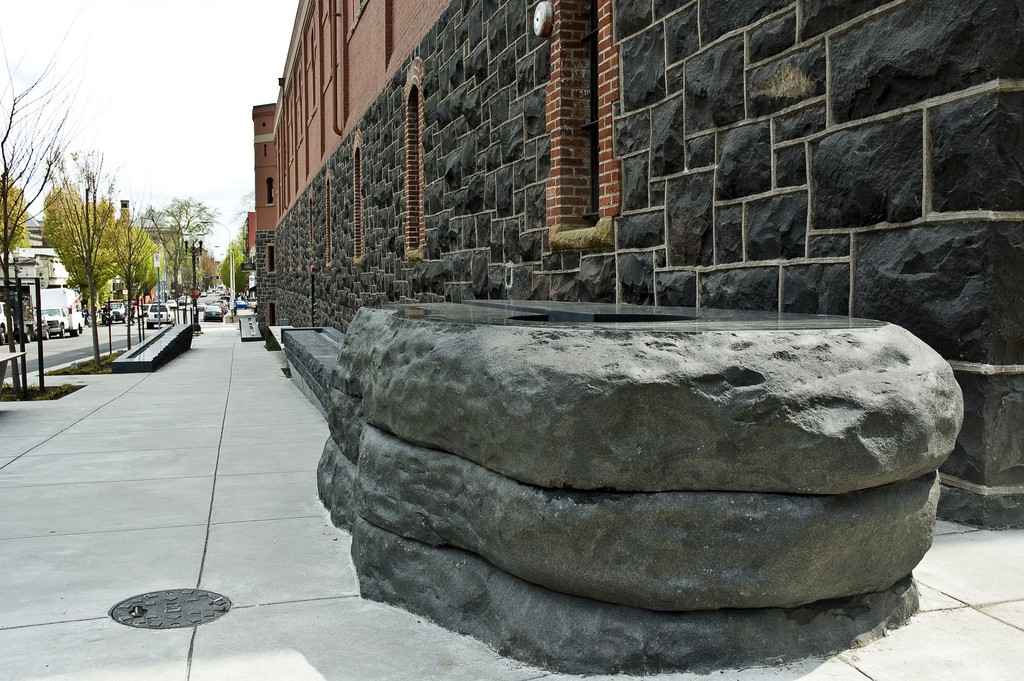 Along the way, there is no place for water to pool: It is always in motion. When the water leaves the source stone, it moves to a small surge tank beneath the sidewalk in a small hidden vault that houses a pump and filter as well as the control equipment. We differentiated the way the water moves through all of the transition spaces from one level down to the next. At the end of the system, the flowing water generates a sense of intrigue as it “mysteriously” disappears into a small slot.

Beyond focusing on water and its appearance as it flowed through the space, we were also committed to working with the stone and its various textures. In some areas, we gave it a highly perfected finish, while leaving other stretches coarse and irregular. For example, in some spots we left the source stone’s front face rough while polishing the top and channel to complete smoothness. 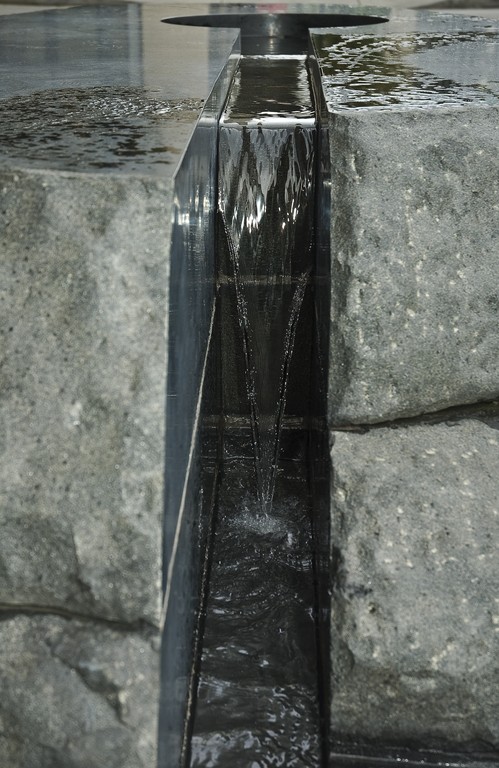 Again, the contrasts are evident, but despite these variations, the composition is able to unfold as a single installation: There is a visual variety within the space that the watershape ties together.

(One key point: This public artwork is located in a highly visible space, and one of our thoughts in varying the surface textures so much was to discourage skateboarders from turning the sliver park into a private playground that would be far more raucous than intended.)

Another substantial design element is the seating: We crafted clean, simple benches using Ipé, a richly colorful tropical hardwood that stands out against the dark stonework. The benches have been cantilevered to create the illusion that they are floating – another detail we used to soften the massive solidity of the stone.

The planting plan is a further reflection of the park’s minimalist design and another study in simplicity. Individual plants were selected for their hardiness, drought tolerance, and ability to thrive without irrigation. This practicality reflects the modern urban design practiced in forward-thinking cities such as Portland, where ecological consciousness and local environmental sensitivity are highly encouraged by government, businesses and citizens alike.

Scott Murase is a second-generation landscape artist who learned the art of place-making and fashioning unique landscapes while working for more than a decade alongside his father, Robert Musase, an internationally acclaimed landscape architect and founder of Murase Associates of Seattle. Scott Murase’s own multi-disciplinary background in architecture, landscape architecture and fine arts have combined to inspire an integrated, collaborative approach to site design that results in unique spaces that are particularly sensitive to the human experience. Murase apprenticed under Kinzo Nishimura, a fourth-generation stone sculptor in Kyoto, Japan, and operates his own sculpture studio.