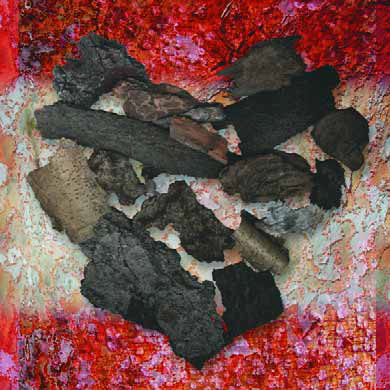 By contrast, most “civilians” notice overall appearances. If they’re in a garden, for example, they will enjoy the sea of shapes and colors and will generally respond to a particular plant or design element only if it really stands out in some way. Knowing this, I like to play in my garden designs with elements of visual control and on finding ways to direct what the viewer will look at first, then second and so on.

In lots of my gardens, I use trees to capture this sort of attention. Even uninspired observers will take note of a specimen’s foliage, branching structure and canopy and appreciate the shade the tree provides. The more observant might perceive that the tree has been placed to block an unwanted view (or to frame a desired view) and might develop a clear sense of the role the tree plays in the garden design.

In all my years of listening to the comments of people walking through gardens, however, I’ve noticed that they tend to overlook the bark – one of the most important design details a tree has to offer. To me, in fact, tree bark may have as much going for it as any flower or shrub. It can lend color and texture, reward attention and can pull designs together – definitely a design force to be considered.

Trees, of course, come in all shapes and sizes. They can be tall and statuesque, small and weeping, distinctly vertical, short and spreading and everything in between. In common, however, trees generally have a strong, structural, wood base that supports smaller, usually higher branches and, ultimately, sprays of foliage on the ends of the branches.

There are, of course, trees that don’t fit that generalization, but the wood bases and the bark that covers them can be used effectively in any design if you recognize certain characteristics and choose an appropriate specimen that will, as the design requires, either stand out, complement other plants, or even disappear visually. It all depends upon what you are trying to achieve.

Let’s dig in and look more closely at the important visual aspects of any tree’s bark:

* Color: Tree bark comes in all colors, from the white of many Birch trees to the near-black of the Mesquite tree. Acer palmatum ‘Sango Kaku’ is a Japanese Maple with red bark, while Chorisia speciosa, the Floss Silk Tree, has green bark. Other trees, such as Platanus racemosa (the California Sycamore), have mottled bark in shades ranging from cream to dark brown mixed with terra cotta flashes.

* Texture: Again, not all bark is created equal. The Floss Silk Tree mentioned just above has vertical lines in its green bark and thorns adorning its trunk that would deter any thoughts of tree climbing. For its part, Melaleuca quinquenervia has a “peely” bark that flakes off in sheets. Many species of Eucalyptus are known for their peeling bark as well and have a completely smooth surface for long periods between bouts of bark-shedding. Even California oaks, which have what I see as an average, non-descript bark, have lines in their bark that create interesting patterns and can draw the eye along their branching structures.

The possibilities in both of these categories are nearly endless, and when you consider combining both color and texture and strategically choosing a tree for a design, it can be hard to know where to begin. In my own work, I take a short cut at this point and think about the specific need – that is, whether I need something that will capture attention at eye level, or if I want something with more vertical appeal that turns the branches and foliage into the focal point.

I’ve written before about how I used Acer palmatum ‘Sangu Kaku’ in the garden of a home in the southern California mountain resort of Lake Arrowhead. This green-leaf, deciduous tree is interesting during the summer months, but it truly stands out during the winter, when its red bark contrasts strongly against a white blanket of snow. In this case, it’s specifically the color of the bark that draws the viewers’ attention away from evergreens that simply blend into the rest of the landscape.

In the case of the Floss Silk Tree, I challenge anyone who isn’t in the landscape profession to describe its leaves from memory. The green bark and its ominous thorns not only dominate all comments about the tree, but completely distract attention away from the canopy. That’s a conversation piece.

In both these cases and all others where trees with interesting bark come into consideration, the introduction of water to the composition only enhances things. The reflective surface of water captures and redoubles the visual impact of the bark and gives you opportunities to enhance the overall design and the views you create for your clients across small ponds, backyard pools or large lakes.

The range of trees that bear consideration in such settings is long, but while the short list below is far from comprehensive, it covers trees that have bark that creates strong contrasts against surrounding environments – and includes trees I have used successfully in achieving the sorts of captivating visuals discussed here. 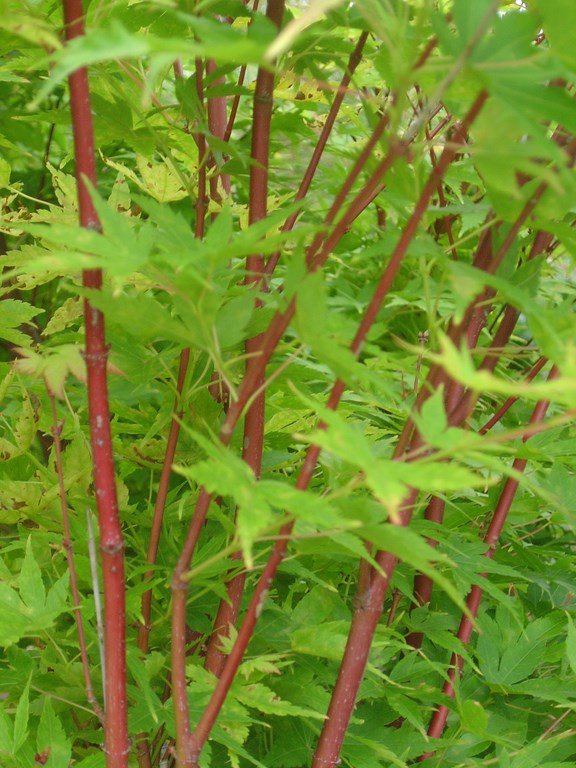 [ ] Acer palmatum ‘Sango Kaku.’ This Japanese Maple (at left) is known for its stunning red bark and is striking when placed all by itself against a white backdrop of either snow or a stark, white wall. Please note that the red colors of the bark fade during warmer weather. It’s definitely more striking during the cold winter months. 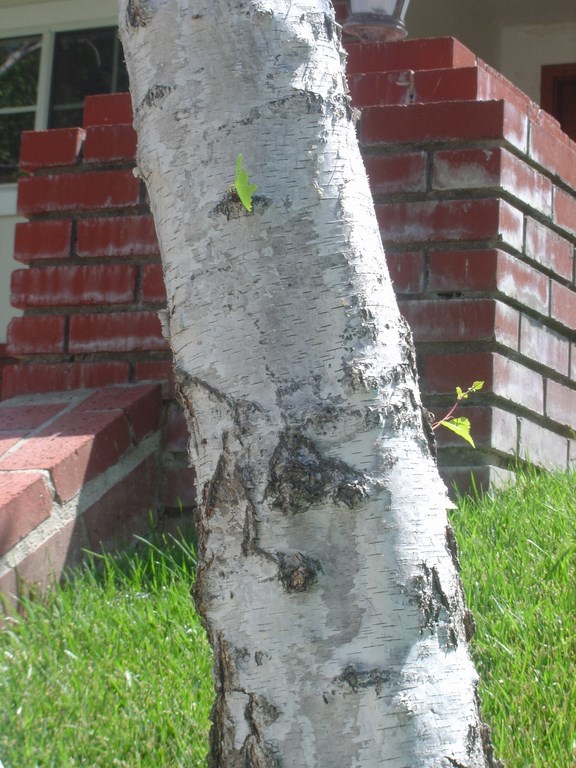 [ ] Betula pendula. One of my all-time favorite tree selections, the Weeping Birch (at right) always draws attention with its white bark punctuated by brown knots, horizontal lines and spots. These work well in large groupings or groves and make incredible design statements when set against dark-colored walls. When using this tree in a design, I always make sure the bark will be visible and avoid planting anything that will grow higher than 18 inches tall in front of it. 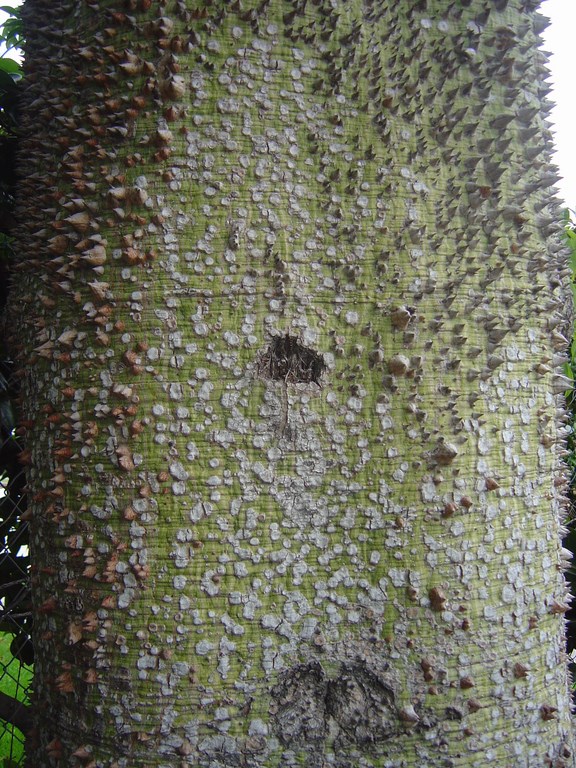 [ ] Chorisia speciosa. Because of the thorns and possible liability issues, I suggest using Floss Silk Trees in spots where passersby aren’t likely to brush up against them. I like using this thorny/green-barked tree as a conversation piece. Seen at left, it has the added distinction of offering large, beautiful, showy flowers that resemble lilies and hibiscus – not something to plant right next to a watershape because of the service implications, but certainly something that shows brilliantly on a reflective surface.

[ ] Eucalyptus. There are too many varieties of Eucalyptus to count, but the most presentable among them have peeling bark that covers a smooth, leathery “skin.” I prefer using them in the background, and I wouldn’t recommend using them close to pools, as their leaves will stain plaster – but they make graceful statements by appearing in reflections when planted on the far edges of lakes. 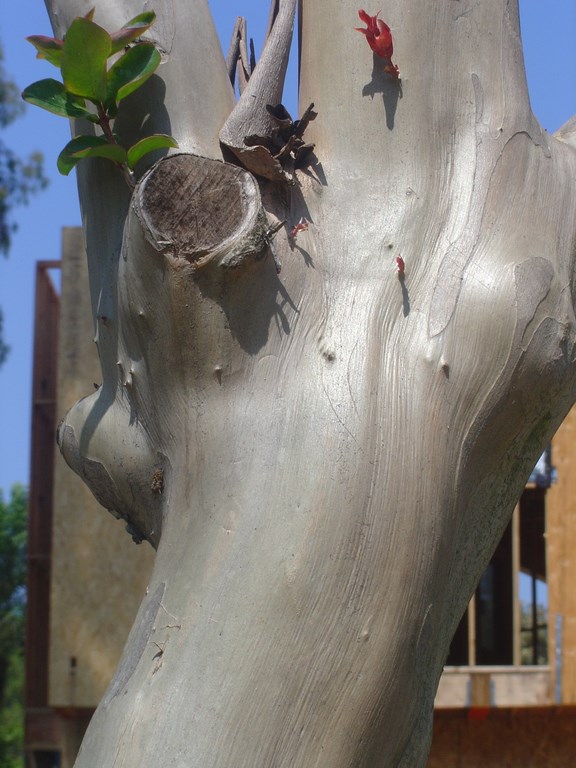 [ ] Laegerstroemia indica. Crape Myrtles (at right) are well known for their summertime range of flower colors. Indeed, when a client is looking for a flowering tree, this slow-growing tree with the single trunk and the smooth, shiny bark is among my first choices. The street I live on is lined with these trees, and I tend to notice the extremely smooth, lacquered appearance of the bark as I walk by almost before I notice the color of the flowers.

[ ] Melaleuca quinquenervia. Also known as the Cajeput Tree, these specimens look a bit like small Eucalyptus trees with light, brown bark that peels off in sheets – an interesting visual right at eye level. It’s a great tree to use when you need a vertical form and also works well when planted in groves or large groupings. 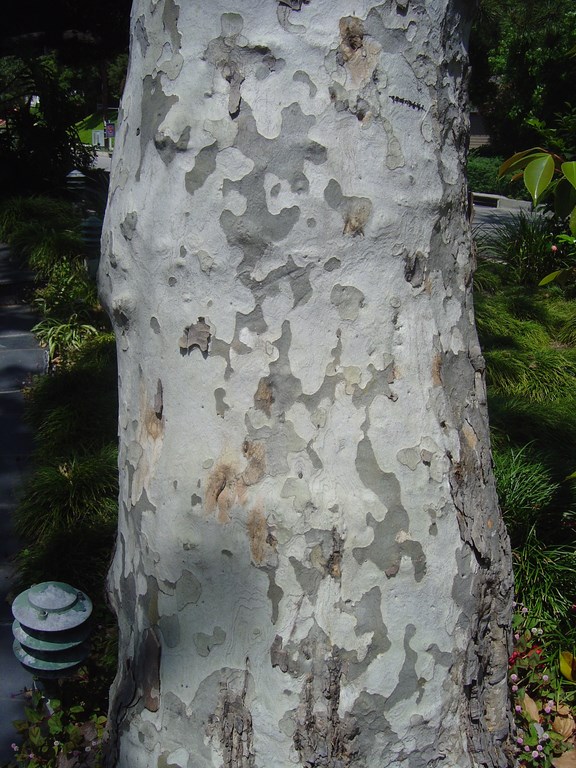 [ ] Platanus racemosa. As noted above, California Sycamores (left) have a distinct bark in mottled colors. (I once took a close-up picture of the bark and asked people to identify it. Most thought it was an aerial shot of farmland.) Combined with its towering presence, the tree’s interesting bark makes it useful as the central “bones” of any garden design. 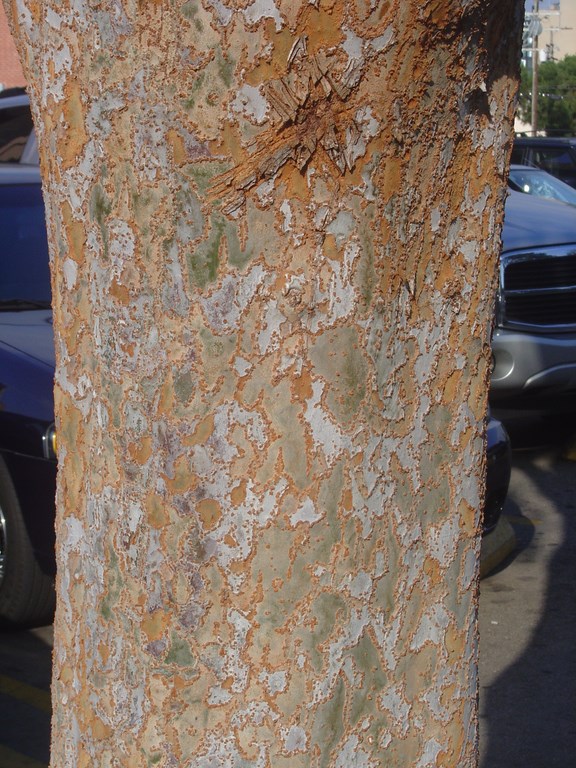 [ ] Ulmus parvifolia. The Chinese Evergreen Elm is a beautiful, weeping tree (seen at right) that provides a great canopy in any area where you want to create shade. It is semi-deciduous, but it offers interesting mottled bark year ’round and looks particularly striking when set off against darker green foliage or a dark-painted wall.

This list is short, but I would almost guarantee that any one of these trees placed in a design as a contrasting element will elicit a comment about its unusual bark – especially if the homeowners or maintenance staff are aware of the virtues of keeping their foliage pruned up to provide good eye-level viewing.