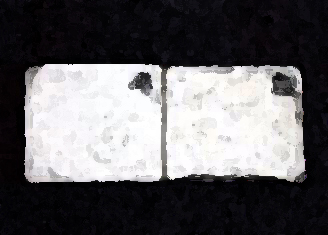 It’s understandable that some would think that too much cyanuric acid – that is, the stabilizer used to keep the sun from destroying the chlorine in outdoor pools and spas – might be bad for the interior finish. It is, after all, acid, which instantly conjures images of surface corrosion and ruination.

The fact of the matter, however, is that high cyanuric acid levels do not cause the sorts of damage some attribute to it, including gray discoloration or white spotting (or “spot etching,” as some incorrectly call it). And that fact is backed up by substantial scientific studies.

One of these – the National Pool Industry Research Center Phase 4 Study of 2006-07 – showed that cyanuric acid at a level of 250 parts per million (ppm) didn’t cause gray discolorations or white spotting. In fact, in comparison to pools with levels of zero, 50 ppm and 100 ppm of cyanuric acid, the plaster pools with 250 ppm of cyanuric acid actually looked best overall after ten months despite the fact that the concentration of acid is several times greater than the usual recommended level of 20 to 50 ppm..

The onBalance team followed up with its own study, placing a well-made, quality plaster sample into water that was in balance according to the Langelier Saturation Index (LSI) and to which we added cyanuric acid to a level of 150 ppm. We placed another, identical sample (or “coupon,” to use the technical term) of plaster into aggressive water (that is, water with a low level of total alkalinity) to which cyanuric acid was added to a concentration of 300 ppm. 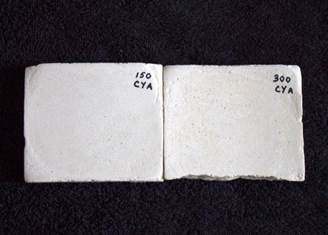 We removed the coupons from both water samples after a year, and the results are shown in Figure 1: The coupon submerged in 150 ppm cyanuric acid was uniformly white, smooth and non-etched, while the coupon submerged in 300 ppm cyanuric acid had slight uniform etching and some exposed aggregate showing at the surface. This difference in surface texture is hard to document in a photograph, but the results are clear – and in neither case did the extreme conditions result in any gray mottling or white spotting.

These results and observations are supported elsewhere:

[ ] by a University of Florida study conducted in 1990 by Dow Whitney, who concluded that cyanuric acid alone did not appear to be a cause of leaching – even at 500 ppm! [ ] by the Arch Study (2004-05), which provided further evidence that high cyanuric acid levels don’t cause gray discoloring or white spotting of pool plaster – although it did find uniform etching (degradation) of plaster coupons as a result of aggressive water rather than high cyanuric acid levels alone. It appears that the alkalinity was not adjusted upward to balance the water (per the LSI) when the samples were maintained at cyanuric acid levels of 250 ppm.

Of course, positive results are achieved when cyanuric acid is added to the pool as recommended – that is, as a diluted slurry introduced through the skimmer with the circulation system allowed to run through a 24-hour cycle. If addition is done improperly (for example, by broadcasting the acid material across the surface of a pool), it may produce areas where undissolved cyanuric acid can collect and will react with the surface to etch a plaster finish.

When used correctly, in other words, cyanuric acid is an extraordinarily helpful component in a typical pool’s treatment regimen, and repeated studies have shown that, even at levels exceeding the recommended maximum of 100 ppm, it does not contribute to discoloration of the sort occasionally observed with plaster pool finishes.

To be sure, there are other issues associated with using cyanuric acid at excessively high levels. For one, the efficacy of chlorine will be reduced, slowing its kill rate with algae, bacteria and other organisms. For another, etching can and will occur if the water also happens to be out of balance with respect to the LSI. But if you stay below the commonly recommended maximum of 100 ppm and are working with balanced water (as you should!), fear not: If you need to stabilize the chlorine in pool water, feel free to use the time-tested approach of adding cyanuric acid.