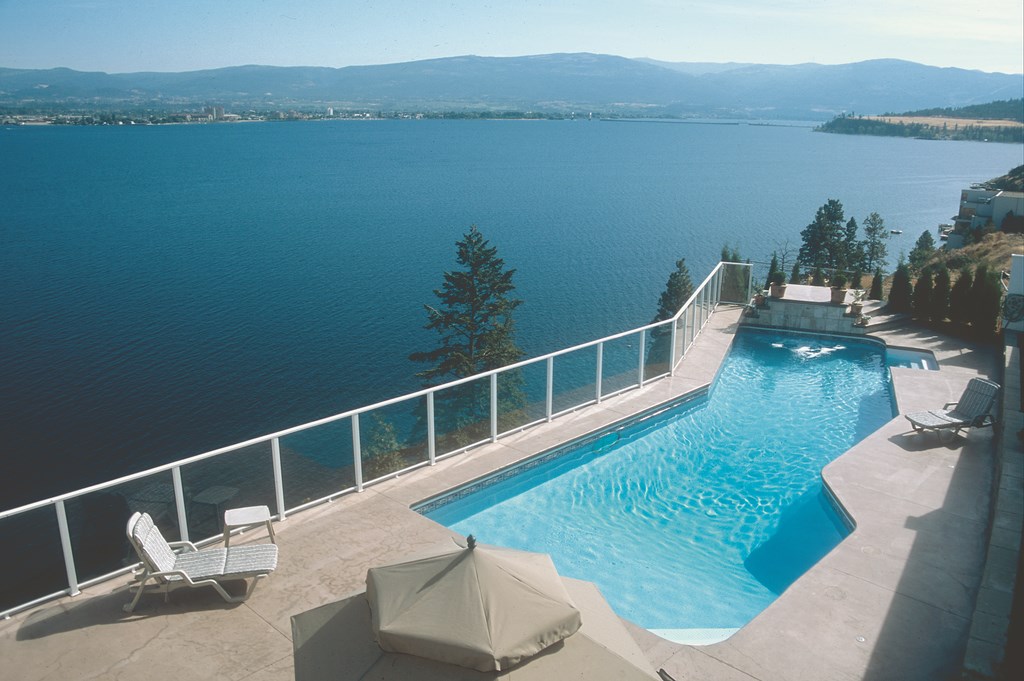 For years, we at Sunshine Pools & Spas have provided high-end, custom swimming pools to a mostly affluent clientele in and around our base in Kelowna, British Columbia. Unlike many readers of this magazine, however, we specialize in satisfying those clients with vinyl-liner rather than gunite or shotcrete pools.

To be sure, pools and spas of any sort are not the first things that come to mind when you think about our area, which is closer to the Arctic Circle than it is to the Sunbelt. But many residents around here do enjoy the good life and want swimming pools to enjoy through the warm summer months.

In serving this market, contractors face dynamic geology and wild swings in temperature from brutally hot to extremely cold. Those conditions impose an unusually wide range of structural stresses and aesthetic limitations on concrete pools – difficulties that have led to vinyl’s dominance of our local market.

That dominance (and the cookie-cutter nature of what most contractors have been willing to offer) led us to distinguish our business by designing and building truly custom pools that use liners and steel support structures in unique and interesting ways. A case in point is the project described here: We believe it demonstrates the creativity that can be applied when working with vinyl – and challenges some of the assumptions people tend to make about vinyl-liner pools.

As is the case with many beautiful pools, the project we’ll be examining is all about maximizing the potential of a beautiful setting.

The pool is perched about 380 feet above Lake Okanagan, an expanse of crystal-clear water that stretches for approximately 80 miles between the cities of Vernon and Penticton in the scenic Okanagan Valley. It’s a spectacular place and could qualify as one of North America’s best-kept secrets, especially among people in the United States who probably have never heard of the region.

For all of its beauty, however, the terrain surrounding the lake is steep, rocky and in many spots not at all conducive to pool construction of any sort. 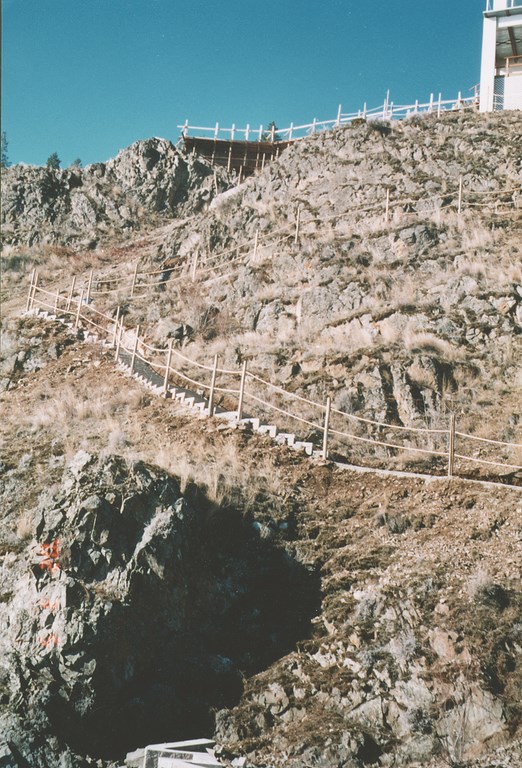 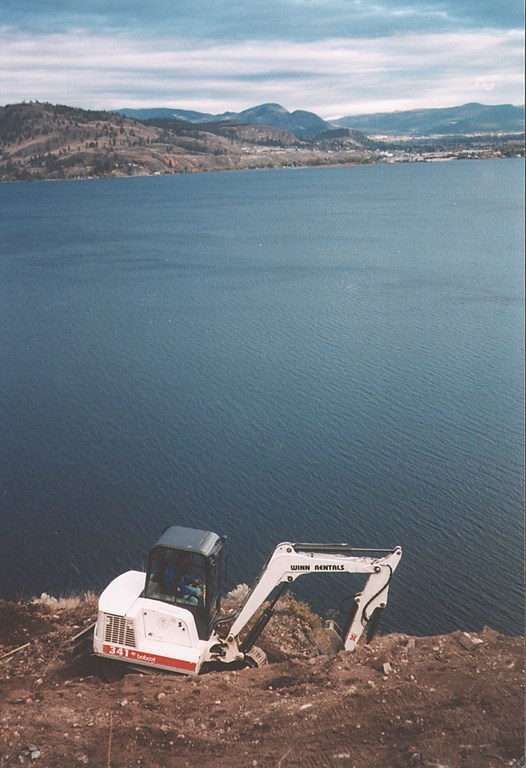 Our clients own a gorgeous modern-style home set on stilts atop a dizzyingly steep cliff-face lot. It’s an exciting space, with generous decks and windows that allow lines of sight to lake views from almost anywhere indoors or out. Delighted by their surroundings, the homeowners purchased the property next door with the ambition to create an outdoor-living space that would include large decks and a pool.

We became involved with the project in December 2001, by which time the clients had already contacted other swimming pool companies – some gunite specialists, some vinyl. None to date had been willing to tackle the project’s radical slope and rocky soil conditions. What was already in hand was a quote from a local engineering firm for construction of a big retaining wall that would be needed to create a flat, useable space for a deck and other structures. The cost for the walls alone: well in excess of $50,000 (Canadian).

Our firm has much experience with challenging lots and is accustomed as well to working in close coordination with geo-technical and structural engineers to cantilever structures off steep terrains. In this case, we could see immediately that by integrating construction of the retaining wall with both a deck and a swimming pool, we could significantly reduce the cost of the wall itself and give the clients and their family the swimming pool they wanted so badly.

MSS Engineering of Kelowna was already involved and had conducted extensive site analysis, so we were able to get right down to the business of developing a design.

The lot is nearly vertical in places, but we took advantage of a 21-foot-wide, slightly sloped shelf to stage the construction of the wall that would ultimately create the horizontal space for the pool and deck and also serve as the outside wall of the swimming pool itself.

Obviously, the structures we were going to add would demand a significant foundation. Working on the slope also required some tricky work in setting up a system of scaffolds that would make wall construction possible – even so, nothing about the project was unexpected or out of the norm.

We anchored the foundation and wall to the hard-pan rock cliff using sections of 1-1/4-inch rebar sunk 15 feet into the rock every 24 inches and grouted into place. The steel supports a reinforced-concrete footing at the base of the wall – four feet deep by eight feet wide and stretching for 56 feet across the breadth of the lot. Atop the footing, we set up a 14-foot-high, poured-in-place concrete wall reinforced with rebar on 12-inch centers – all per the engineering plan set up by Gerry Tietz of Tietz Construction in Kelowna. 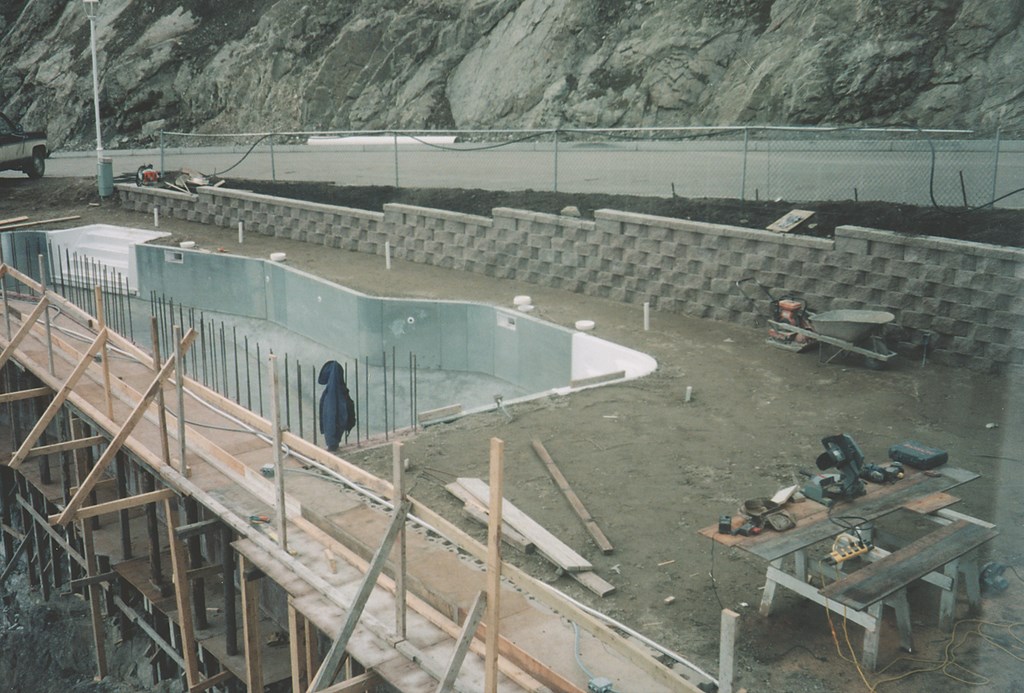 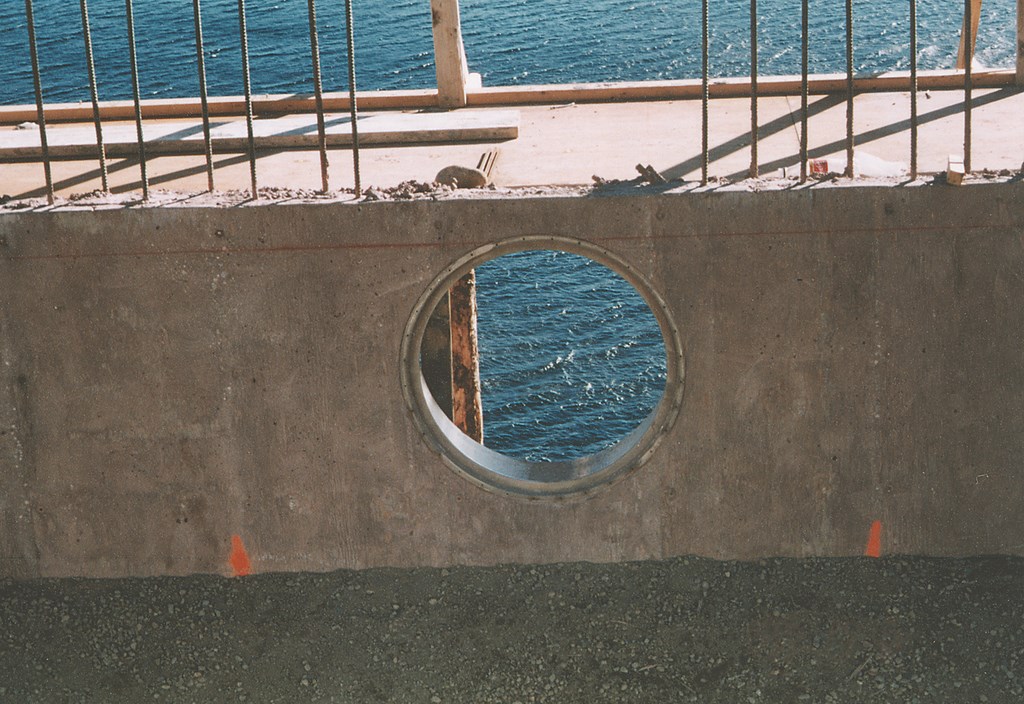 The wall had been angled to accommodate the angled shape of the pool, which was to be 48 feet long in all with widths varying between 12 and 14 feet and shallow areas on both ends of the pool. The area behind the wall was backfilled with crushed rock and sand and compacted according to the engineer’s instruction to 98-plus percent.

The only thing truly different to that point was the special three-foot-radius, stainless steel barrel and flange we roughed into the exterior wall about two feet below the eventual waterline. This would later accept an underwater porthole.

Probably because of the custom nature of the work, local building inspectors took a keen interest in the project and, in reviewing the plans, required several changes that basically amounted to structural overkill. They managed to drive up the cost somewhat, but given the nature of the site, neither we nor the clients minded too much – and we all rested a bit better knowing it would take a monumental catastrophe to cause the structure to move.

Throughout the project, Lorne Lapham at MSS Engineering was extremely helpful in obtaining permits and clearances from local authorities and in making all parties clear on exactly what was being done on site. It bears mentioning that a project such as this absolutely requires the services of a quality engineering firm and that all of our own work is based on reliable soils reports and extensive geotechnical information.

The pool itself features clean lines and light-colored materials that harmonize with the style and finish of the white-stucco home. All fine-tuning and detailing of our initial work was done with close involvement of the clients.

Once we developed a final design and had settled most of the aesthetic issues, we called in Brantford, Ontario-based Technican Pacific Industries to manufacture the liner and pool structure. The liner was set up as a series of panels cut to a custom template and heat-welded together. The sides are supported by a system of 14-gauge galvanized steel panels and struts, and the bottom is lined with fiber-mesh-reinforced concrete. 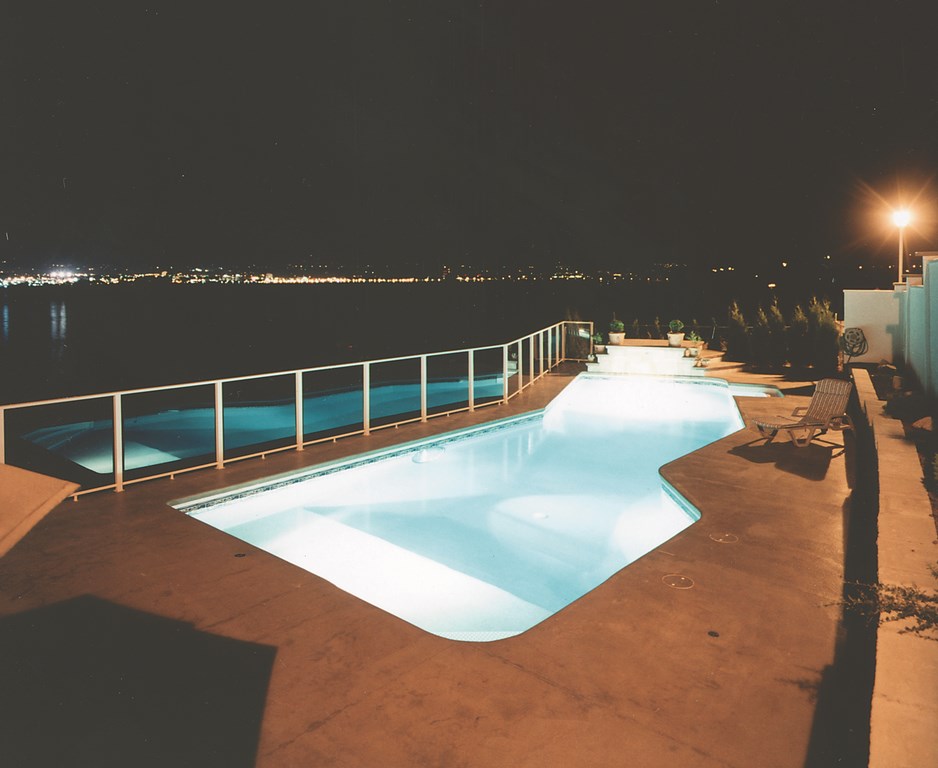 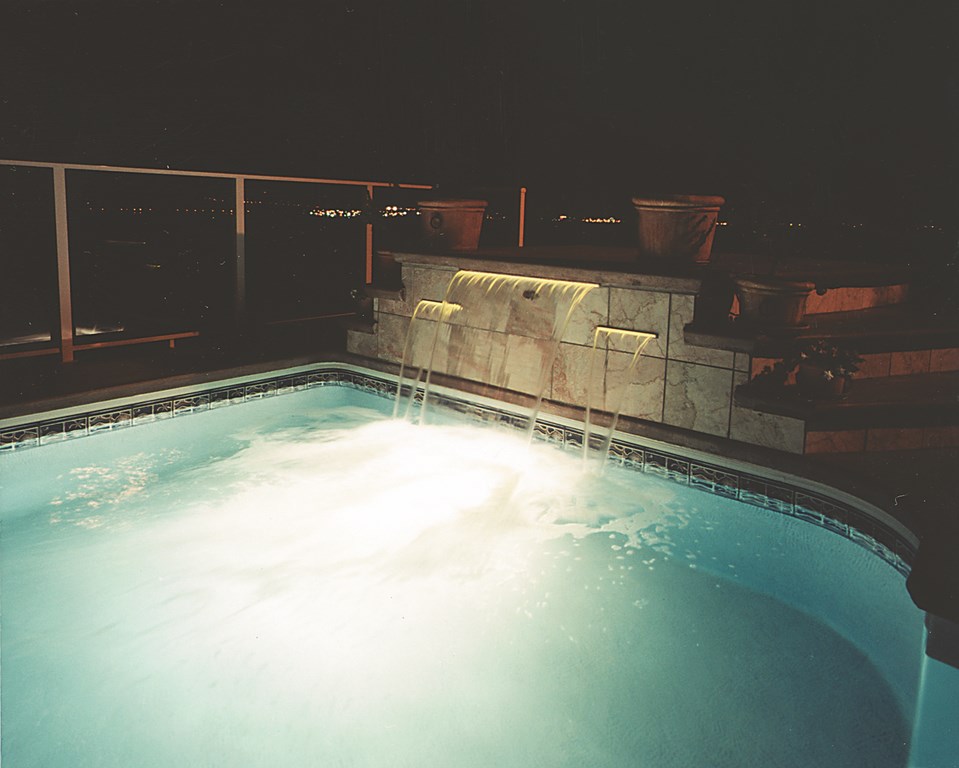 Our custom approach to this project is typical of what we do, and we’ve developed a great working relationship with Technican through the years. Everything works the same way it does for packaged pools: We hang the 30-gauge liner in a bead-in-track system and then suck it into position using a liner vacuum. The difference comes in the fact that our pool systems are usually anything but ordinary in terms of layout, contours, depths and other custom features.

Vinyl-liner pools typically require a two-foot over-dig at the perimeter to accommodate the construction of the walls. In this case, however, the lot was too narrow and there wasn’t much “elbow room” around the pool. This is one of the reasons we elected to use the retaining wall as one of the outer walls of the pool, thus enabling us to move the entire structure out from the slope while increasing available deck space and giving us plenty of room to set up the pool’s other walls.

We also enhanced the sense of spaciousness by cantilevering the deck out three feet beyond the retaining wall. The deck itself is reinforced concrete with a simple, smooth finish and is tied into both the retaining wall and pool structure. An aluminum-and-glass rail structure provides for safety without significant visual obstructions – and has a crisp, modern appearance in keeping with the home’s design.

The pool features two sets of steps – a corner-mounted set in one shallow end and a straight set of steps recessed into the upslope side of the other shallow end. A sheeting waterfall cascades into one end of the pool from a simple two-foot structure made of marble-faced concrete block and topped by the concrete decking. Three sheer waterfalls also pour into the pool from beneath the slightly cantilevered deck.

Hayward Pool Products of Canada provided the entire equipment package as well as the SuperVision fiberoptic lighting we installed in the pool and waterfeatures. The Novafall was manufactured by Oasis Waterfalls of Florida.

Oddly, the most distinctive feature of this pool is barely visible from the deck: The aforementioned porthole, set below the waterline on the far wall of the pool, is a unique touch that took some real effort to execute.

The structure for the round, submerged window is all stainless steel and was designed in conjunction with Aero Stainless, a local steel fabricator we use frequently to obtain a variety of custom parts. Originally, the design called for three portholes, but the expense of fabricating them became prohibitive and the pool wound up with only one.

As mentioned above, a stainless steel barrel and flange were roughed into the wall. Before we installed the liner, we applied a bead of sticky, double-sided 440-gasket tape onto the flange mounted on the barrel. We then inserted the 3/4-inch safety glass into the barrel, where it adhered to the tape. Next, we mounted a standard cork gasket onto the glass and the steel barrel. 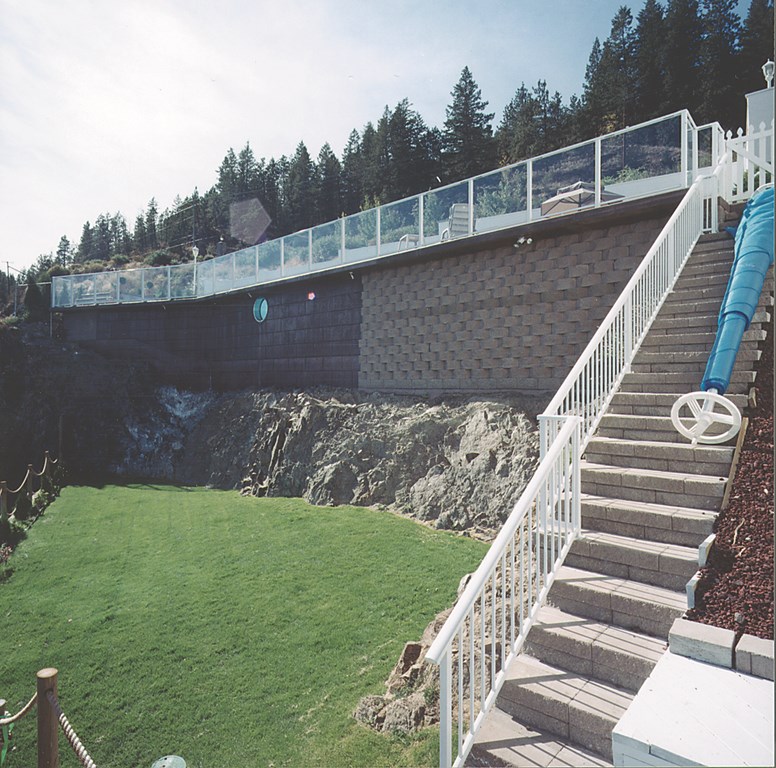 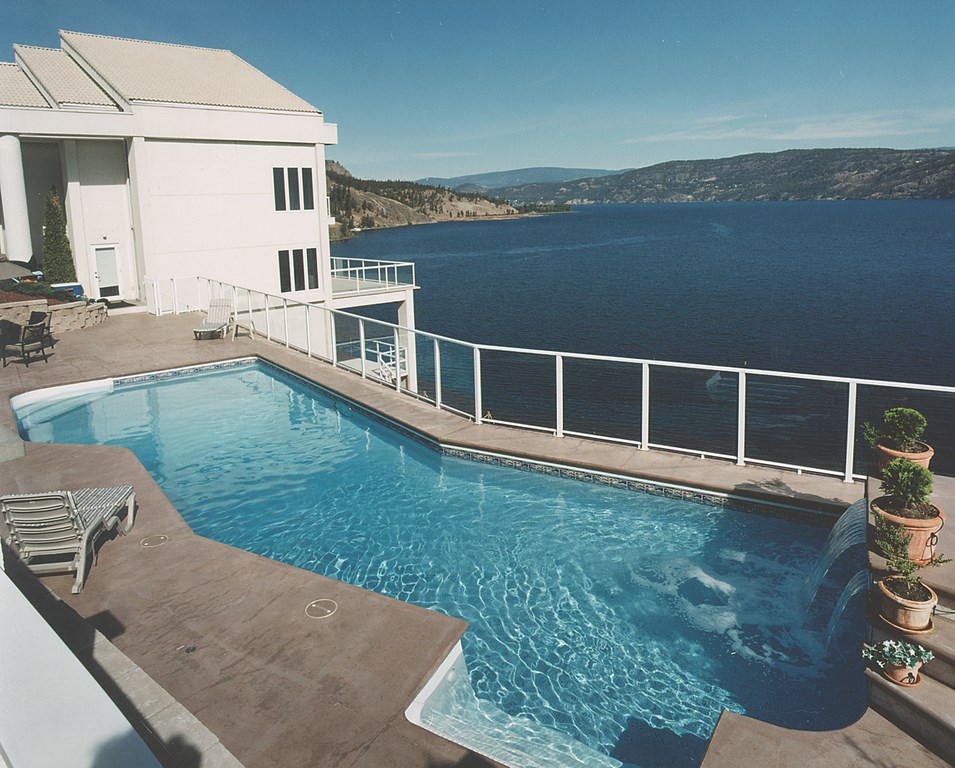 The liner was hung in place and we sucked the air from behind it using a liner vacuum. This held the liner in position while the pool was being filled to the bottom of the porthole – the weight of the water ensuring that the liner was in its precise, final position over the porthole. Another gasket and stainless steel flange were mounted using a series of stainless steel screws that sandwiched the entire assembly together for a watertight seal. The final step in the process was cutting away the liner on the inside of the flange to expose the glass.

When we finished and finally filled the pool with water, everyone was pleased by how naturally and easily the pool seemed to set on its perch. The homeowners are thrilled with the project and tell us they’ve spent a great deal of time entertaining and relaxing in and around the water. (I suppose it’s worth mentioning that one of the homeowners is named Cliff, and it wasn’t long before the project became known as the “Cliffhanger” – and our client had a new nickname.)

For our part, we’re proud to have been able to hang a beautiful swimming pool in a spot where so few other builders thought it could be done.

Ron Yavis is design and project manager for Sunshine Pools & Spas in Kelowna, British Columbia, Canada. He has worked in the pool and spa construction trade since 1980, when he and his brother, Peter, expanded their landscaping business to include spas and backyard swimming pools. In 1996, he was hired by Sunshine Pools & Spas’ owner, Tim Young, to launch the company’s construction division, which now runs alongside the company’s retail store and full-service maintenance and repair operation. Yavis personally oversees all of the firm’s construction projects from start to finish, and more than 90% are fully custom, in-ground vinyl pools.