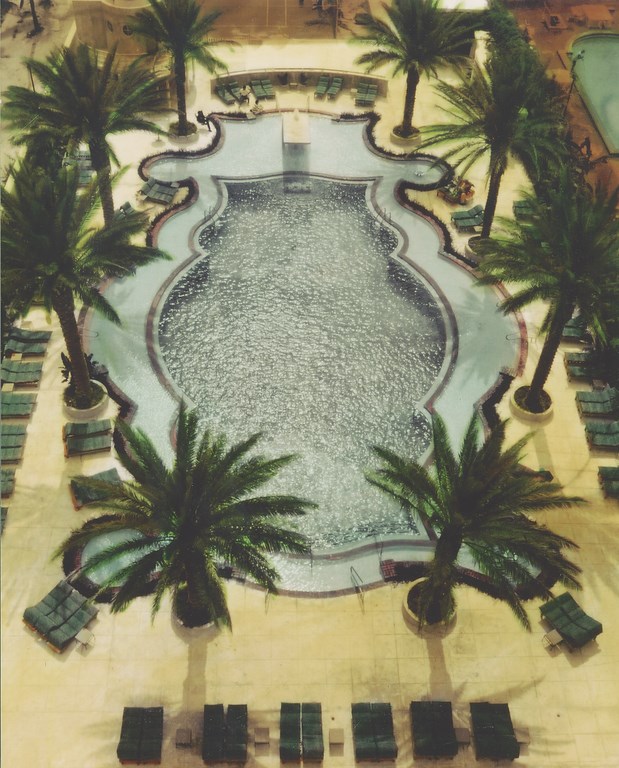 It’s a grand watershape built at a time and place when “grand” was in fashion in so many ways. Ever since 1940, when the Raleigh Hotel and its beautiful swimming pool opened to the public for the first time, the establishment has made a statement about the sun-drenched glory of a prime South Florida location as well as the glamour of an era gone by.

Designed and built by renowned architect L. Murray Dixon, the hotel and pool are located in South Beach, Miami’s famed Art Deco district. The pool’s curvaceous shape and modern styling reflected the hotel’s architecture and the aspirations of the times. As the ’40s wore on, it would become a swimming pool that was perfectly in sync with the world around it.

When Miami boomed in the years following World War II, the hotel did, too. Vacationers and snowbirds from the great cities of the Northeast arrived in droves, looking for a new kind of excitement and an entirely different sort of glamour of the kind that featured the outdoor lifestyle, bright colors, bathing beauties and frosty drinks served up from poolside cabanas.

When they arrived at The Raleigh, no doubt many were sure they had found exactly what they were after.

From the start, The Raleigh carried an aura of sophistication and celebrity.

The opening-night ball featured entertainment by Martha Raye and was attended by the area’s social elite. Legend has it that Desi Arnez, an unknown local drummer at the time, filled in on percussion for a missing band member and was “discovered” that night.

In the years that followed, Esther Williams filmed many of her famous swim scenes in the pool, which often hosted water extravaganzas. Celebrities such as Jackie Gleason and Arthur Godfrey became poolside regulars, along with countless less-well-known pleasure seekers of the day.

There’s a good reason the pool attracted all this attention: With its sweeping lines and a lowered deck area that mimicked the pool’s distinctive, urn-like shape, it’s one of the earliest pools I know of that was built to make an artistic statement – one that is just as relevant today as it ever was. 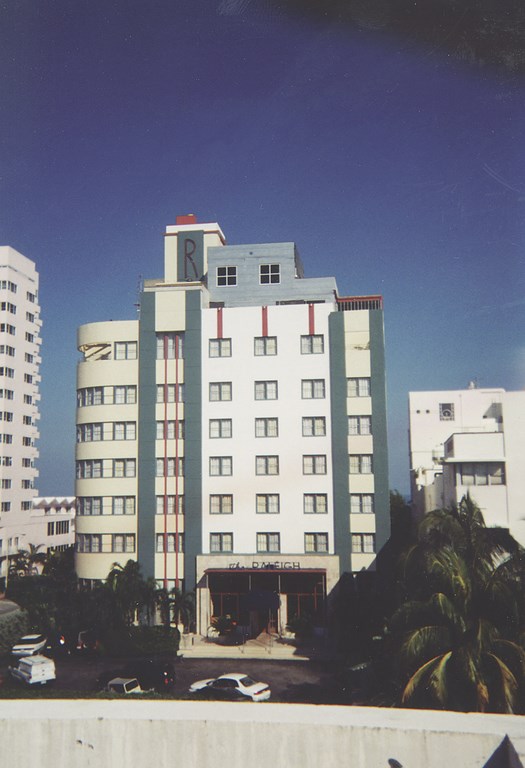 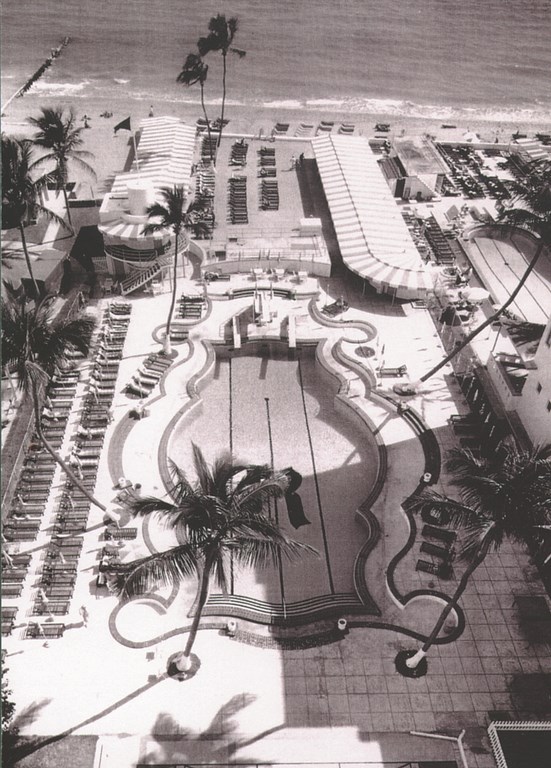 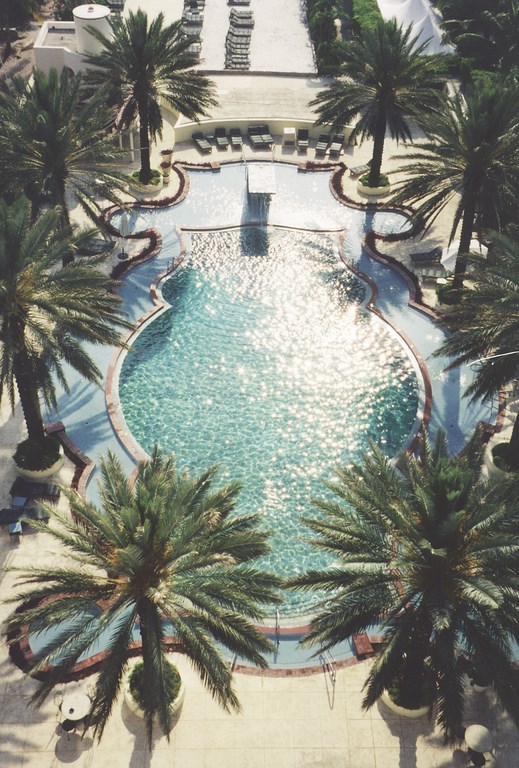 It’s also a powerful statement about the role water plays in creating and defining an environment. In its heyday, the pool was surrounded by cabanas and was the center of a whole social scene. Regulars rented cabanas on a seasonal basis and practically lived by the pool – an opulent, sexy lifestyle that became the envy of literally millions of visitors.

So powerful was this whole scene that I’m convinced the pool at The Raleigh was critical in driving demand for residential swimming pools up and down the East Coast and probably beyond in the decades that followed.

In a very real sense, The Raleigh sold a lifestyle, a vision of entertainment and self-indulgence that was embraced by middle-class Americans in the last half of the 20th Century. It’s no surprise that The Raleigh pool went on to be mimicked countless times at other hotels – and in swimming pools that studded the backyards of wealthy Floridians and the faraway, star-studded hills of Southern California.

Today, The Raleigh is still in the thick of things – ground zero for local and even national culture. Celebrity photographers Herb Ritts, Bruce Weber and Ellen Von Unwerth often work poolside and elsewhere on the highly stylized grounds, and one of MTV’s music shows is filmed poolside, as have been movies as varied as “The Birdcage,” “Bad Boys” and “The Versace Story.”

From the start, The Raleigh demonstrated not only how much fun pools could be, but how beautiful they could be as well. In that respect, I liken it to the far more elaborate pools at Hearst Castle and the great pools of resorts in Las Vegas and Hawaii.

It may not be the oldest, largest, most elaborate or most famous hotel pool in the United States, but The Raleigh pool has a place in history as one that certainly hit all the right notes at a time when America was seeking a place to celebrate the warm sensations of summer.

Of course, summers come to an end, and there was a time when the sun truly set on The Raleigh and its pool – and the entire South Beach area. South Florida changed a lot in the 1960s, and it didn’t help that swimming pools were becoming a whole lot more accessible to the masses right through this time.

For years, South Beach was in sad shape. Once-bustling restaurants and clubs closed their doors, the neighborhood declined and, as a lifetime resident of Florida, I can remember being saddened at seeing this once-dazzling area fall to ruin before my eyes. By the late 1980s, the area had sunk to its lowest ebb.

The swimming pool at The Raleigh was no exception. When I visited the pool in 1990, it was in pretty sorry shape. The decking had cracked, the blue tile was falling off and the surrounding palm trees looked shabby and tired. Just as the pool had reflected the lively sensibilities of the 1940s, it had now become an emblem of Miami’s economic and cultural decline.

But this is America, and as the engines of commerce gave rise to new South Beach resorts, the opportunity to generate tourism dollars drove a real urban renaissance in Miami. A new owner took over The Raleigh, and I was privileged to be brought in to do some consulting on the pool restoration. Finally, along with other classic hotels including the Biltmore and Delano hotels and numerous other Art Deco buildings nearby, The Raleigh was on its way back.

BACK TO THE GOOD LIFE

The idea with the pool was to restore it to its former glory while updating it for modern users and tastes. Aside from the usual resurfacing, updates to plumbing and equipment and rehabilitation of the deck areas, the primary change made to the pool was a dramatic reconfiguration of the edge treatment.

The original design included a split-level deck, the lower portion of which echoed the pool’s shape. The decision was made to submerge this lower deck area as an extensive thermal shelf.

This area, which varies from 12 to 15 feet in width and in depth from 2 to 15 inches, has produced a wonderful area for lounging and sunbathing in the cool water – an artistic and functional treat. The lighting and landscaping also were updated, and by the time a beautiful cascading waterfeature had been added, a classic pool had been returned to its former glory and then some.

The Raleigh reopened in 1991, and the pool is once again a hive of activity abuzz with self-indulgent patrons, bathing beauties and star-gazers. It’s a far more international crowd than it was in the ’40s – a suitable adaptation to the tides of 21st-century culture.

As a watershaper, The Raleigh serves as a reminder of the heritage of classic watershapes with which we’re surrounded in Florida and elsewhere and continually inspires me to work creatively. I think often of how unusual and dynamic this pool must have seemed in those days long before the era of custom backyard pools, of how enduring and compelling its adventurous design has remained – and of the satisfaction that comes with rekindling that energy and appeal in my own work.