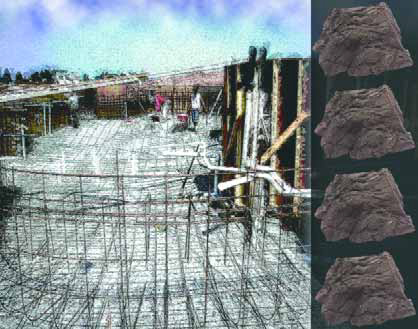 Back in November, I described the background of a project on a sprawling estate in the hills near Hanover, Pa. – a spectacular setting for an enormous swimming pool, an island spa, a cascading waterfeature and big expanses of rockwork and stone decking.

As was mentioned, our first task was to remove a brand-new system of retaining walls that had been built adjacent to the planned location for the swimming pool. We did so because the wall’s large footings reached into a space needed to support a cascade that will appear to tumble into the pool. To ensure long-term integrity, we wanted all of the pool-related structures to be an integral unit with no cold joints – shell, foundations, structural decks and all associated construction – which meant the walls had to go.

The project team (and the client) needed little convincing on this point. All it took was my explanation of the sorts of problems that could result from soil expansion and contraction and differential settlement between the existing walls and the new structures we were going to build around them.

Ultimately, the client, the general contractor (C.E. Wheeler of Glyndon, Md.) and I all landed on the same page. Crucial in this discussion was the fact that we had detailed soils and geology reports and structural engineering that had been developed according to their criteria.

With those issues settled, we completed demolition and began to dig.

We knew going in that one corner of the site was fill, but much more of the area was made up of a thin layer of topsoil over a shale material that had to be broken and ripped out of the ground using massive backhoes. It was really something to behold: Once the crust was penetrated and sections gave way, the shale came out in jagged (and often quite large) shards. 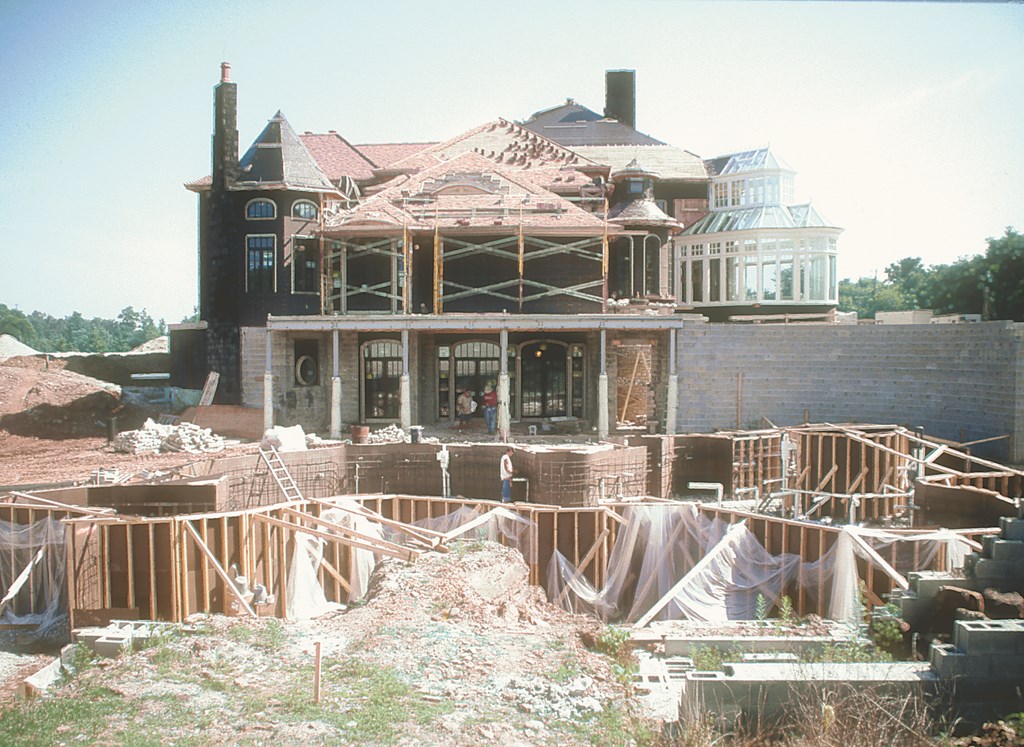 It’s a wonderful material in terms of its stability as a foundation for structures once they are built, but it’s a nightmare through the excavation and forming stages. In fact, the material was so unyielding and brittle that it was impossible to dig the hole in such a way that the “soil” could be used as a form for the shell, as is the case with most swimming pools. Instead, we had to over-excavate the pool by five or six feet all the way around to enable us to form the entire system as a freestanding structure.

As the framers found, it’s almost impossible to drive stakes into shale, even using jackhammers. At that point, my partner Kevin Fleming and I met with a framing specialist, Matt Steich of M. Steich Contractors in Williamstown, N.J., to help us devise an appropriate form-assembly system.

My goal was always to use the sort of two-by-four stud construction I swear by in my work, which was no problem. I also insist on using plywood rather than the local favorite, pegboard, which lacks the structural integrity needed to withstand gunite application. I also prefer to line my forms with tempered Masonite as a stripping aid, but this material proved incredibly difficult to find in sufficient supply in rural Pennsylvania. Through Kevin’s persistence, we eventually found enough Masonite to make it work – but it was a foreshadowing of more supply problems to come.

With Steich’s help and by following detailed engineering plans, we set up a system that relied on transferring loads using two-by-fours anchored at a handful of key locations around the dig. In some locations, we set up anchors using plates bolted into the shale with metal stakes; in others, we drove stakes into the thin layer of topsoil; in still others, we butted kickers against the shale “walls.” It was a tricky business, but through careful use of cross braces we were able to transfer loads from the relatively few points we were able to set up with good anchors and built forms that would not move during gunite application.

Kevin Fleming deserves immense credit for keeping the project on track through the forming phase. He worked side by side with the carpenters; more important, he supervised the process every step of the way, and I know from my own experience with “big construction” that without his vigilance, there would be no chance that this project could have proved so successful.

UP FROM THE PIT

With the forms in place, we laid down a two-foot layer of 3/4-inch crushed gravel, per the structural plan. Once that material had been repeatedly rolled and tamped into place, we were ready for the plumbers.

This is where we ran into the most extreme of our supply problems. Apparently, three-inch-diameter schedule 40 PVC piping is not used in great quantities in this part of the country, which gave us further headaches in locating the hundreds of couplings, bushing, reducers and other bits and pieces we needed to plumb our pool. 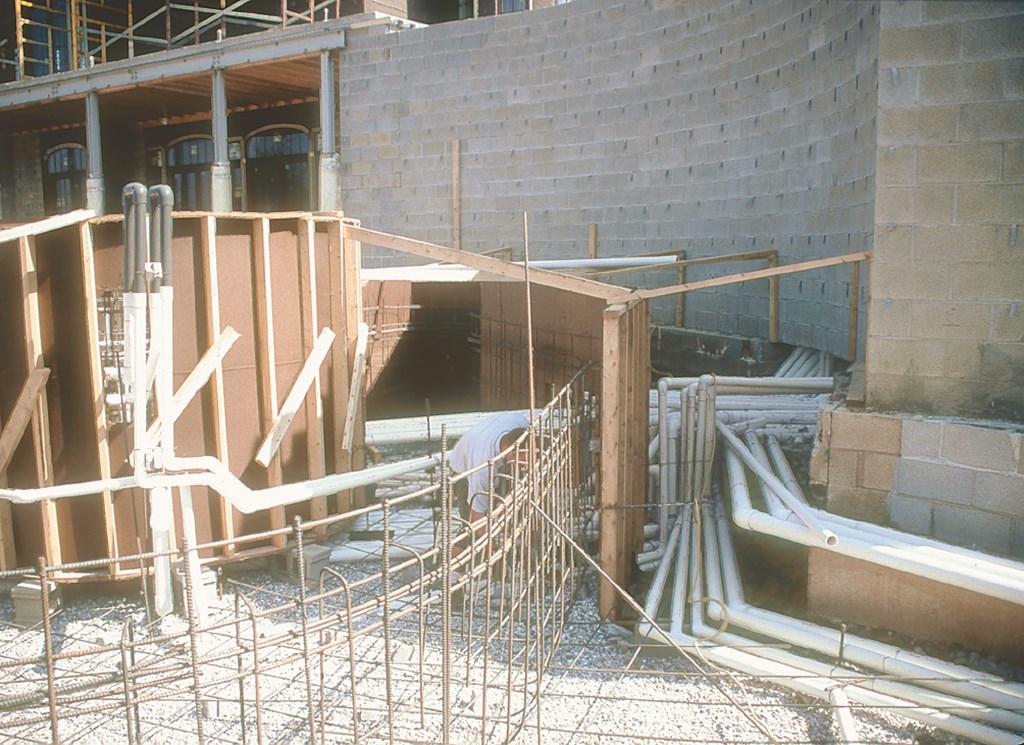 Kudos once again to Kevin Fleming, who came through in a big way by bird-dogging every supplier in the area to come up with all the materials we needed. Ultimately, we used more than 800 feet of three-inch pipe, more than 600 feet of 2-1/2-inch pipe and assorted smaller pipes along with hundreds of fittings.

While Kevin was busy shaking loose the plumbing supplies, I was in Los Angeles, where I spent two full days going over the plumbing plans with my favorite (and only) plumber, Johnny Rodriguez, whom I’ve mentioned several times in these pages as a professional of the highest order.

In this case, Johnny was preparing to fly across the country to install a complex network of plumbing for a multi-faceted set of systems – one of them a 16-jet spa that would have to be plumbed a full eight feet out of the ground. The need for precision on this project was, to the say the least, extreme. And I don’t know of too many plumbers who could reliably get it all right the first time through.

The entire plumbing scheme runs back to a vault that houses equipment from Jandy (Petaluma, Calif.), including four Hi-E heaters, four D.E. filters, three cartridge filters and more than a dozen pumps of varying sizes along with an array of valves and control systems. We set up four separate circulation systems (three for the pool, one for the spa) as well as numerous systems for the waterfeatures, and with Johnny’s skill and Kevin’s supervision, even the equipment room is a marvel of organization.

Suffice it to say that this was a plumbing project of monumental proportions, and Johnny and his son, Pancho, nailed it right on the head.

Once the plumbing had been placed, we turned our attention to the structural steel – another rigorous project phase.

In all, we had five pages of structural details just for the steel, and it was a case where there was absolutely no room for compromise. We brought in another southern Californian, Jim Pope of Mission Steel in Chatsworth, Calif., to work with Chris Williams and his crew from Tri-State Steel of Warminster, Pa., and once again Kevin worked his magic with local suppliers in securing more than two tons of #3 rebar, a couple tons of #4s and a big pile of #5s. 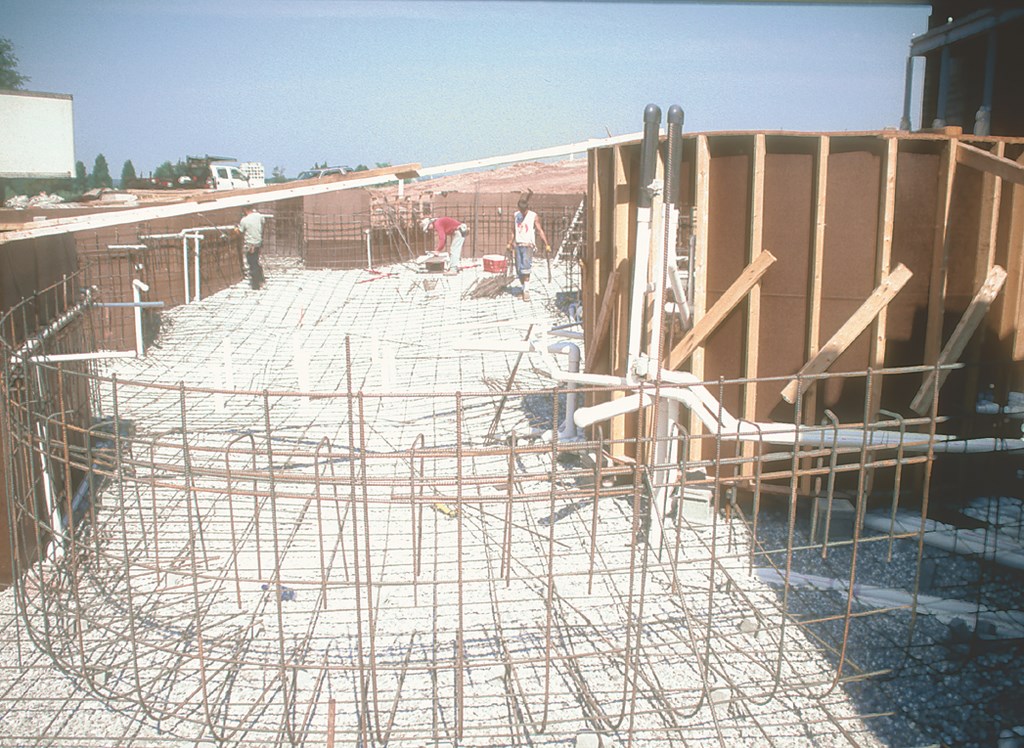 As one who’s seen and worked with hundreds of heavy-duty steel structures, I’m not easily impressed, but what I saw take shape on this project really blew me away: The effort and muscle needed to move, place and tie all of those bars was staggering, and this project in particular was not for the timid or weak of back. The number of nicks, scrapes and small lacerations even our veteran steel crew sustained in the course of this project bore testimony to its complexity.

With everything said and done, the forms, plumbing and steel, all set in the most rugged earth I’ve ever scratched, were things of beauty befitting a magnificent project.

Next time, I’ll return to the vintage pool I’m restoring in Los Angeles. When we return to this project in a few months, we’ll pick up with the gunite phase.