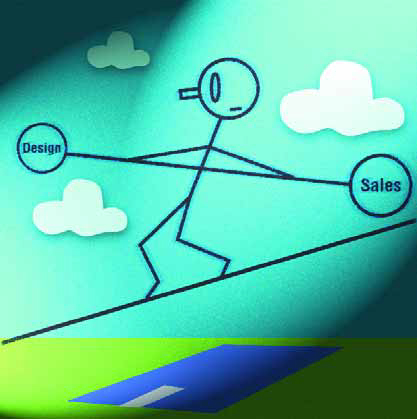 Reader Chris Walton asked a great question in response to comments I’ve made in a couple of recent columns about the value of detailed plans: “Why do we in the pool industry lump sales, design and project assessment into one job description?”

In the message surrounding his question, he explained in some detail that his firm, PoolDizine, Inc., of Jacksonville, Fla., takes basic plans and proposals for swimming pools and other watershapes and turns them into complete and extremely detailed sets of construction documents and plan drawings that can be used in generating accurate bids and that also provide detailed specifications for the construction process.

To be sure, he has an interest in altering perceptions of the sales, design and project-assessment functions as a matter of building his business, but I could see right away in reviewing the information he sent me that competent contractors could easily take his plans, generate good cost estimates and then precisely execute a project. All the more reason, I say, to take his question seriously.

As Walton points out in his e-mail, “Project planning consistently happens after the project has already been contracted. The two results are that the contractor loses money and client expectations are not reached. Even when a project has been ‘professionally’ designed by an architect, there are often gaps within the project planning that create logistical nightmares for the pool contractor.”

Part of any answer to Walton’s question must be historical. For years, sales representatives trained and/or knowledgeable (to widely varying degrees) in the construction process have sold swimming pools to clients who simply don’t know that they have other options. It occurs to me that it’s like sitting down with a car salesperson and expecting him or her to design the car you’re about to purchase.

With cars, however, we all know that people working in dealerships are sales specialists, not designers or engineers. Our expectation is that other, more qualified people do the creative work and we have no problem at all seeing the selling and designing of cars as being two separate tasks.

By contrast and for whatever reason, I can say without fear of contradiction that few people think of swimming pools and spas as being so complex that selling and designing them should be separate jobs. There are exceptions, of course, but for generations the pool industry has accepted a system in which the two jobs are seen as one.

Speaking for myself, I believe such thinking is obsolete because, as Walton points out, watershape construction has become so much more complex in recent years that it is now unreasonable to expect salespeople, often hired for their marketing backgrounds, to become swimming pool designers and engineers. Instead, he suggests, “Swimming pool representatives should be selling the abilities of a pool contractor to complete a sound project.”

Lay these observations over a marketplace in which too many times I’ve seen clients shortchanged because they had the misfortune of working with a salesperson who either offered too limited a menu of options or was simply incompetent. The results are projects lacking in aesthetic dimension and/or technical expertise, and what gets me is that these salespeople are often overwhelmingly confident in their abilities as designers. What also gets me is that consumers so often fail to do their homework and will simply assume that the wonderful salesperson is also a brilliant designer.

Yes, there are those who excel in both arenas, but I agree with Walton that it’s not often the case. Indeed, I think the time has come when the industry should see sales, design and project assessment as equally important and entirely separate jobs. A system that may have made sense historically when projects were simple and choices were made among a few templates makes no sense at all in a time when even modest projects can be quite challenging in aesthetic and/or technical terms.

The current expanse of potential watershaping elements has indeed reached mind-boggling proportions. I’ve been at it for longer than I care to think, but it is probably beyond my own ability to consider and work with every single possibility that now comes into play.

I do know, however, that a great many watershaping projects are now going way beyond the water itself. Even this basic shift, which has many of our projects encompassing entire landscapes, means that there are literally dozens of new elements to consider.

On the broadest level, exterior designs including water challenge us to consider, for example, views of our vessels from primary as well as many secondary focal points, broader color palettes and grander consideration of the overall allotment and use of space. A specific issue such as the physical and visual transitions from the house to the pool may lead the project into an range of critical decisions about everything from hardscape design, pathway distribution and shade structures to plantings, garden ornaments, lighting, fire elements, outdoor kitchens, dining areas, sound systems and more.

If that’s not enough, watershapes are becoming ever more complex on their own. With interior pool finishes, for example, the big choice was once between white and colored plaster. Now we consider pebbles, polished finishes, colored aggregates, polymer finishes and tile in ceramic, glass, relief and hand-painted forms. Or look at pool lighting: Where once we plopped a single incandescent light in almost every project, we now have multiple fixtures in combinations of colors in fiberoptic, quartz, metal-halide and LED formats.

I could go on to water treatment, heating, safety systems and control technology (but won’t). The point is, everything is conceptually vast today – something that certainly wasn’t true 20 years ago.

What we do with the water itself has exploded, too, so much so that the term “watershapes” has been incredibly helpful since it was coined by this magazine a few years back. Every custom project worth its salt now calls for consideration of associated waterfeatures, fountains or displays, living water systems, advanced spa and therapy configurations, great edge treatments, water-in-transit systems, landscape treatments, quality materials and more. Understanding how to apply all of these elements across a range of projects can and should be the work of a career.

All of this leads is a preamble to my direct response to Walton’s original question, which is itself a question: Is the typical swimming pool salesperson/designer really capable of effectively handling all of these complexities? Can they make everything work seamlessly during the sales process as well as through the design and construction processes, as so many are asked to do?

For the most part, I’d say, the answer is clearly an emphatic, “No!”

The key to addressing this current unsettled state of affairs in our industry involves, I believe, thinking positively and seriously about separating the sales and design tasks. Of course, there are unique individuals who really can do it all, but the mainstream of the industry should head in the direction of having salespeople who focus on marketing the output of a design shop instead of handling both tasks at once.

The design shop may be within the salesperson’s company, but in some cases, an outside service may fit the bill. And project assessment may involve the salesperson with yet another entity, as there are now many firms that specialize in building the designs of others.

I bring up this third party – the design-savvy, competent contractor – because it brings me around to what I believe is something of a missing link in this discussion: the estimator.

Design issues aside, I think the industry would benefit immediately if sales and marketing people were all required to work with estimators whose principle occupation was examining sets of plans, doing “take offs” and creating accurate bids. This would push the industry towards better plans and create a class of watershapers who do work similar to what’s being done by Walton’s firm. I see this as a key to improving the entire environment for project management during construction and actually making the salesperson’s commitments come to fruition.

Yes, I’m making broad generalizations here, but one only needs to look to other construction trades to see models for our own future. How many general housing contractors design homes themselves? Some do, of course, but in reality it’s a small percentage – practically zero, in fact. Instead, they receive plans from architects who create plans that are detailed to the nth degree – so detailed that they can count screws and hinges in generating accurate estimates and bids.

As Walton points out, however, when architects or landscape architects roll over into the swimming-pool arena, their documents don’t tend to be so complete. A trained estimator could fill the gaps, identifying inadequacies and making certain the information is fleshed out so anyone who looks at the plans knows what’s going on. This would, I think, be of tremendous value to a great many firms.

As it stands in the watershaping trades, consumers have no idea how much detail actually goes into establishing a bid – but learn all about it as the project unfolds and discover that the bid that came in 40 or 50 percent below the top bid wasn’t such a bargain after all. As I see it, this sort of situation is the result of lumping the sales, design and project-assessment tasks together in an arrangement that should no longer be the model used in our businesses.

Separating tasks based on expertise rather than linking them out of some perception of competitive necessity would also be a real benefit to salespeople.

I’ve always viewed salespeople as being on the front line when it comes to building client relationships, understanding their needs and representing the company’s ability to give them what they want. It’s challenging work, and relieving them of design responsibilities and project-assessment tasks will enable them to focus on what they do best.

Whether the salesperson transmits clients’ desires to in-house designers and estimators or works with outside firms, he or she would no longer be put in the position of designing or assessing complex projects that are very likely to be beyond his or her level of true expertise. This is the way it is in other construction businesses, so why not here?

Cutting back to Walton’s question once again, pool-related sales, design and project assessment tasks should not be handled by one person. What the industry needs to do is identify and rally behind talented salespeople, designers, project managers and estimators – and I agree with Walton when he suggests that the time has already come for such a sensible division of pool-industry responsibilities to occur.