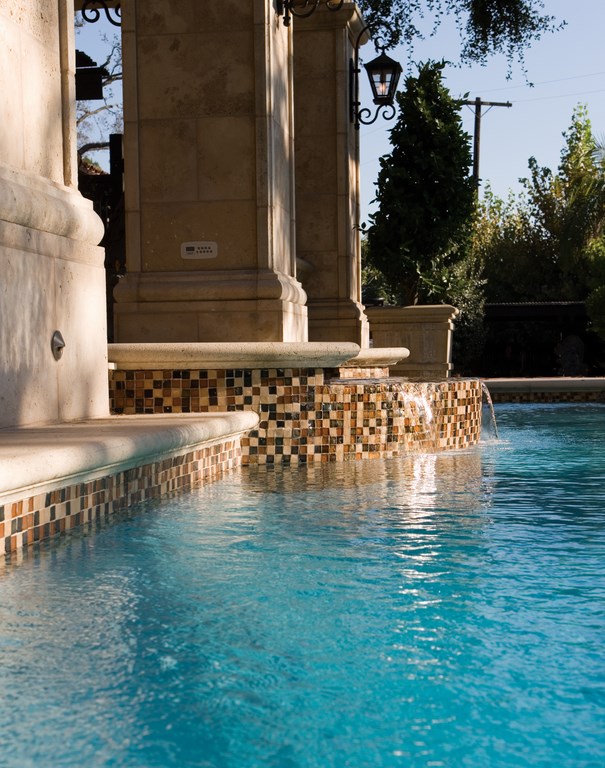 As custom watershapers, we all know that each combination of client and project presents a unique profile with respect to scope, design goals and the overall mission. In the project seen here, however, that common formulation was elevated by virtue of the fact that we were working with an accomplished architect on what was to be his own home.

He came to the table with strong, distinct ideas about style and project direction, but he was also willing to collaborate with us when it came to the details and practicalities of developing a watershape composition that suited both his needs and a spectacular setting. The property – a gently sloping two-acre lot – is located in an exclusive neighborhood in San Marino, Calif., and our work there took place in concert with construction of a gorgeous new home in a classic Mediterranean style.

My company, Arcadia Pools & Spas of Arcadia, Calif., had worked with the architect before on a fountain for a commercial property, so we already had a good operating relationship. But we knew from the start that this particular set of watershapes was going to be something very special and that we’d have to be at the top of our game in executing aesthetic details that would be extremely important both to the client and the overall visual success of the project.

Before we arrived on site, he had already developed a general scheme for the watershapes, which were to include a raised circular spa, a rectilinear pool with a vanishing edge and a large trough that was to double as a reflecting pool. He’d tucked this assemblage next to the house alongside a stone-covered deck, and our footprint included two stone columns that supported a cantilevered portion of the second floor.

By the time the client brought us in on the project, the house had reached its final construction phases and had gone through a series of modifications along the way. Straight through, he had been modifying the plans for the watershapes as well – and it was clear that he wanted our input on a range of details extending from materials selection all the way through to setting precise shapes and configurations for the vessels.

Ultimately, we wound up tucking part of the eight-foot-diameter raised spa beneath the cantilever and between the columns and set up the 15-by-36-foot pool with radii on both ends and 90-degree corner cuts to pick up details of the home’s architectural style. Opposite the spa, we set up a 20-foot vanishing edge that flows into a large trough. 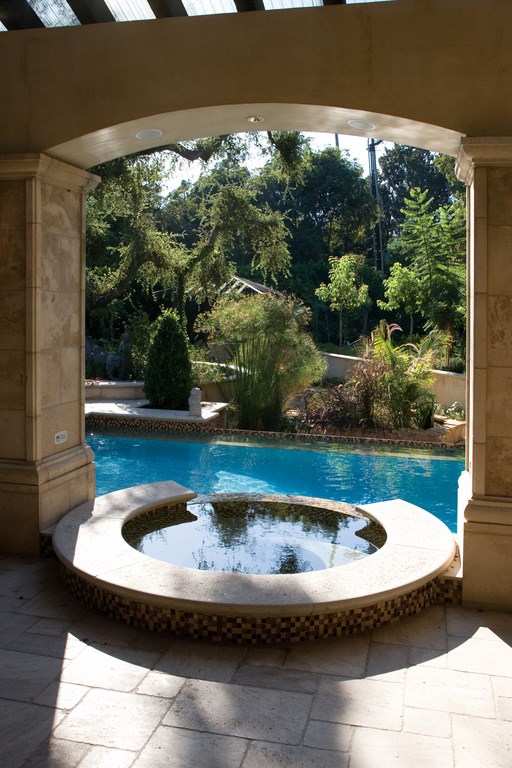 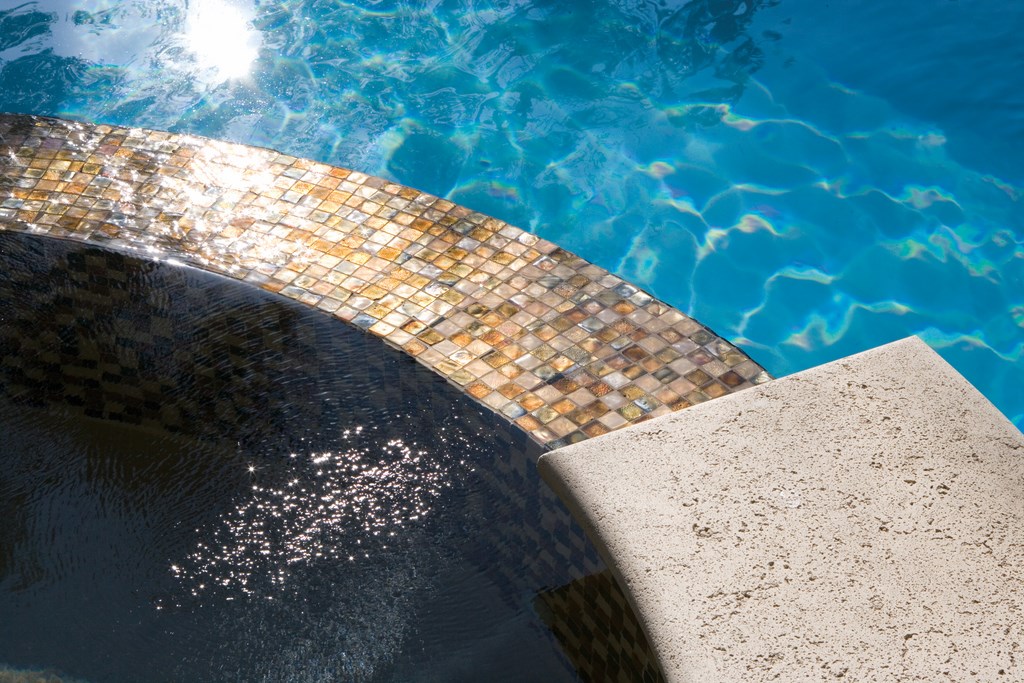 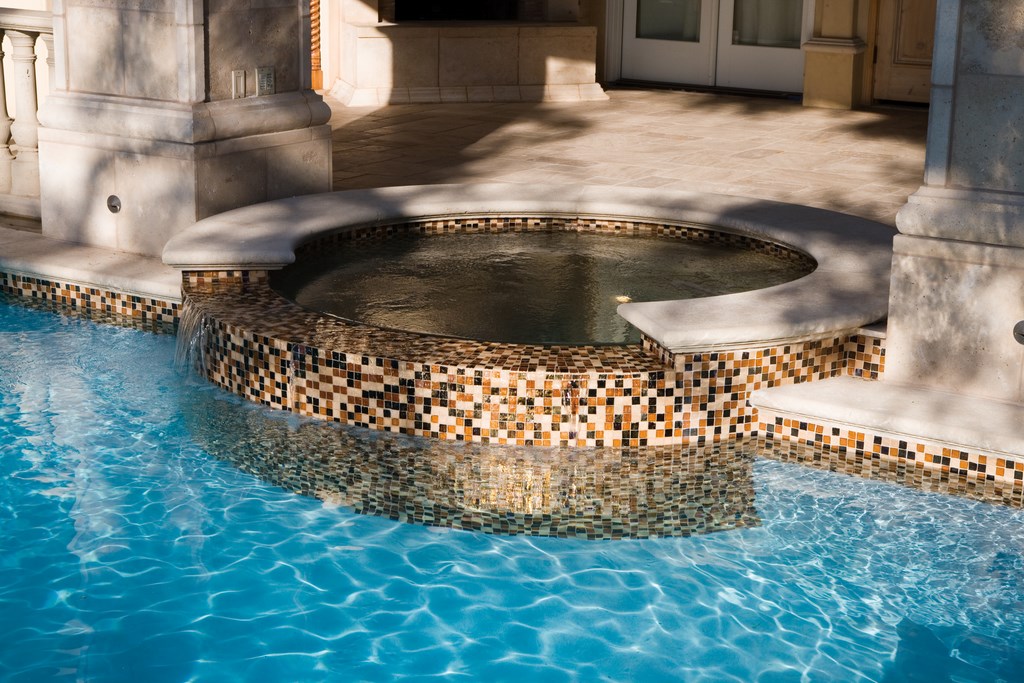 The basic concept was that the three interconnected bodies of water would provide layered views leading the eye along the water surfaces and out into the surrounding landscape. This step-wise program required some careful planning with regard to elevations, especially since the client wanted the reflective surface of the vanishing-edge basin to be visible from the deck area to serve as an invitation to a waterside seating area out in the yard and onward into the landscape itself.

The landscape program was equally refined, with a set of intricate brick pathways, mature trees and plantings, a series of berms and a number of intimate destinations. In essence, the watershapes were to form a beautiful, harmonious transition between the home’s interior spaces, the deck and the yard beyond. By design, in other words, it was to be a highly “structured” setting – one filled with rich materials that were to play off the subtle colorations of the travertine flooring inside the house and on the deck as well as a number of other colors that transitioned to the landscape.

In my book, this seamless blending of shapes, styles, colors and textures encompasses the best potential of residential design, inside and out. In this context, we knew our watershapes were to be a thoughtful enhancement to the setting rather than something that would stand apart.

In excavating the site, we soon uncovered the footings for the columns. This led us to contact Ron Lacher of Pool Engineering (Anaheim, Calif.) to obtain a structural detail for handling the surcharge that would result from the existing structure butting up against the bond beam of the new watershapes. He responded that same day, enabling us to move forward without delay.

As mentioned above, the lot slopes only slightly – no more than a few feet from front to back of a large space – so in addition to clearing the site for the spa, pool and basin, we also dug away a portion of the backside of the site down approximately three feet to accommodate our vertical transitions.

The spa rises just a foot above the deck and falls a short 18 inches into the pool. In turn, the pool falls just two feet over the vanishing-edge wall into the basin, which reaches five feet out into the landscape. It’s an unusual treatment for a vanishing-edge system – one we’d never tried before – but the result is compelling: In effect, the shallow slope and outthrust basin let the system provide its own water-on-water view. And at the same time, the reflections link everything to the greenery beyond. 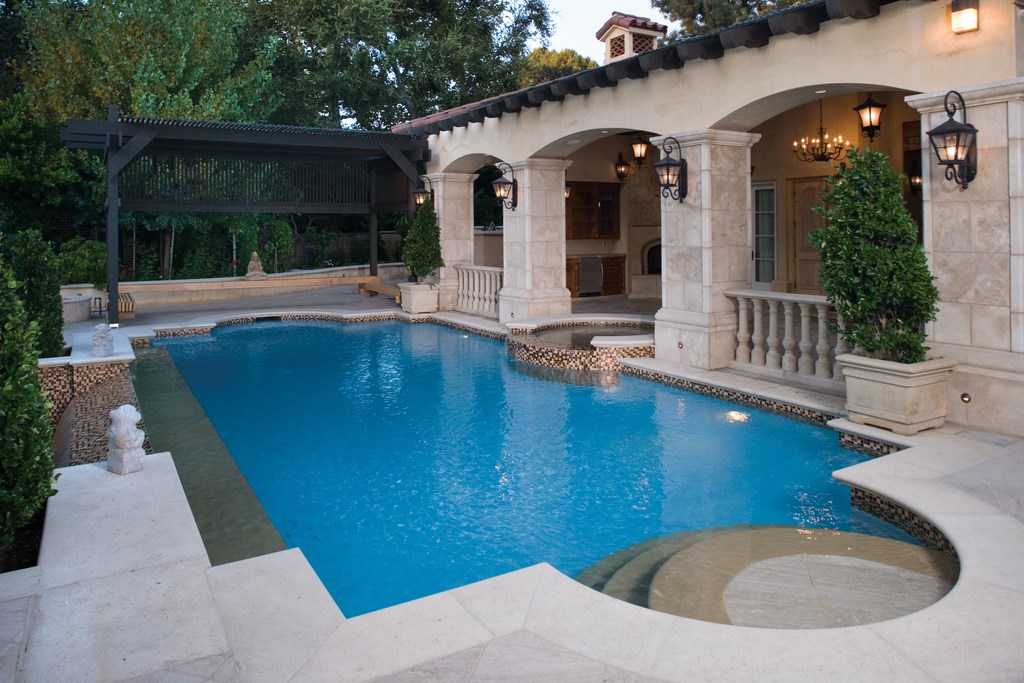 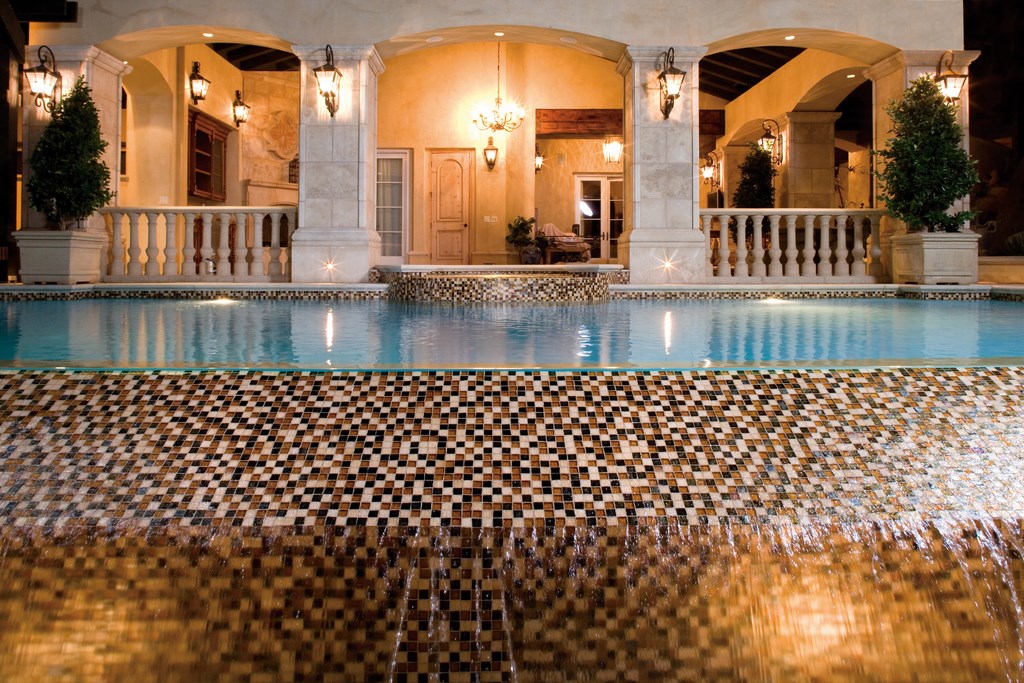 The itself basin is completely finished in glass tile to draw the eye out across the terraced water surfaces and provide gorgeous reflections of the surrounding landscape. The basin’s edge rises 18 inches above the grade we established and now serve as extra seating. From this low wall, decomposed-granite pathways radiate into the surrounding garden areas.

The pool was designed as a visual draw as well – in this case toward the vanishing edge. The vessel is seven feet deep on one end and three-and-a-half feet deep in a shallow end that features radiused steps that mimic the outside contours of the vessel.

Along the far wall of the pool beneath the vanishing edge, we installed a long bench that runs the length of the pool. This provides seating that gives bathers a perfect spot for viewing the basin below as well as the reflections and the landscape all around. It also provides close proximity to anyone sitting along the beam of the basin – another means of weaving the spaces together.

As is the case with most top-notch projects, materials selections were critical to the success of the resulting visuals. The key choice here was for 600 square feet of glass tile provided by Oceanside Glasstile (Carlsbad, Calif.) – a stunning blend called “Gold Coast” that includes a light beige, two shades of brown and a deep ebony.

This particular blend ties in beautifully with colors selected for the home’s interiors and also serves as a visual link among the three vessels. We knew this would be a key decision and spent a good bit of time with the client rolling through possibilities, but when we saw this blend, we all knew it was the perfect choice – rich and colorful but with an understated elegance. 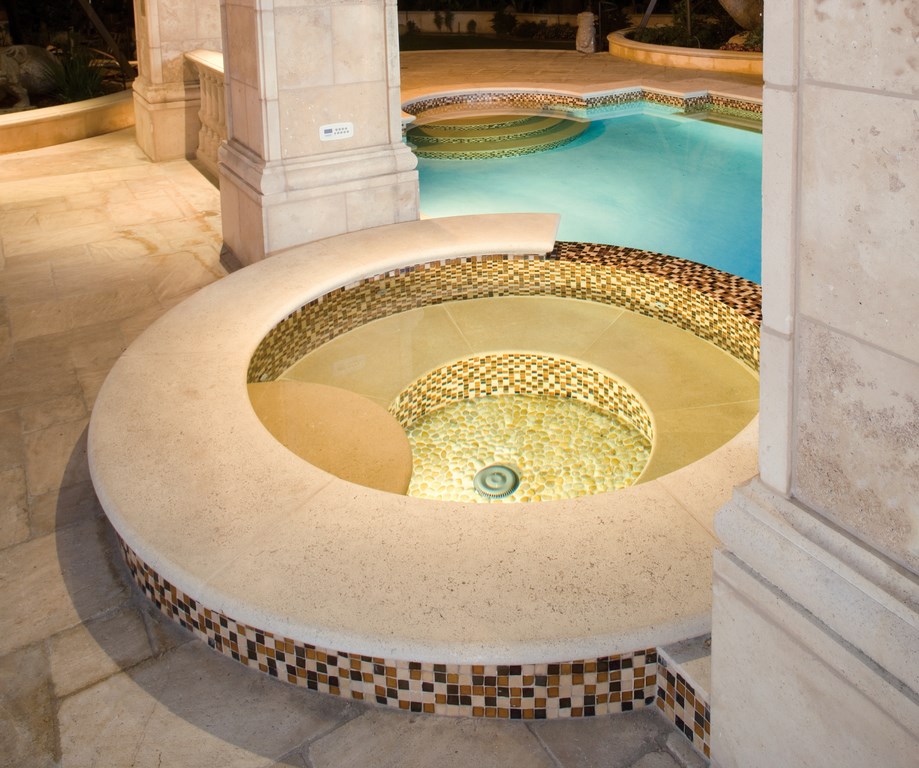 The entire vanishing-edge basin is lined in this tile, as is the vanishing-edge dam wall – down to the bench on the pool side and all the way down on the basin side. The pool’s waterline also has this tile, and so do the raised beam and vertical bench surfaces of the spa. The spillover from the spa into the pool is finished in tile as well – down to 24 inches below the waterline, essentially matching the finish of the dam wall on the opposite side.

Inside the spa, we finished the horizontal bench surfaces in travertine, which we also used in the pool on the flat portions of the steps and benches. The spa floor is finished in a polished beige stone that was used in several interior rooms. (Both the polished stone and travertine were treated with a penetrating sealer to protect them from the corrosive effects of chemicals and water.)

Finally, the remaining interior surfaces of the swimming pool were finished in a soft-looking, off-white Hydrazzo supplied by Aquavations of South Miami, Fla. In ordinary circumstances, I would have had reservations about specifying four different interior finishes, but in this case all the colors blended so beautifully that, rather than looking busy, the entire effect is one of deftly interwoven colors and textures.

Along with a huge range of aesthetic details, we were also charged with tackling a range of practical issues – keys not only to the overall visual performance of the work but also to its soundness and operation.

[ ] The watershapes are structurally independent of the stone deck, columns and home, so we set up expansion joints to allow our vessels to move separately from those other structures. The client did not want to see the joint, however, so we brought the travertine right over its top, lining the decking’s grout joints up with the expansion joints below. This way, the worst thing that will happen if there’s any minor movement is that the joints will crack – but the cut stones will remain intact. [ ] The equipment pad is located some thirty feet away from the water, which made installation easy. We kept things simple hydraulically, using three WhisperFlo pumps from Pentair (Sanford, N.C.) – one each, respectively, for the spa, pool and vanishing edge. Everything is run on three-inch plumbing to ensure efficiency. We also used a diatomaceaous-earth filter from Pentair and control systems from Jandy Pool Products (Petaluma, Calif.). [ ] There are three 300-watt halogen lights in the pool and one in the spa along with two 200-watt fountain lights in the basin. All are on their own dimmer circuits, so the client can manage outdoor moods at the touch of a button. [ ] Although we didn’t install the pathways around the basin, they are an important element in the overall setting. Three feet wide, they are finished in several pattern variations that change every ten feet, providing both beauty and visual interest for anyone moving through the landscape and to and from the seating area around the vanishing-edge basin.

In an unusual twist, the landscaping was installed before watershape construction began: The client wanted everything to look completely finished once our work was done. That was a rare treat: On the day we filled the pool, the scene was complete and looked as though it had been there for several seasons of maturation.

Watershaping involves such a range of visual elements that there’s always a sense of anticipation that goes along with adding water and seeing how everything looks and works when complete. It’s the culmination of months of planning and visualizing and attending to details – and the payoff can be most gratifying when everything comes together.

In this case, and particularly because we had worked so closely with an architect/client who has a tremendous sense of style (not to mention strong ideas about how he wanted everything to work together in forming a cohesive environment), we were utterly delighted when the pumps kicked in and the visuals worked out just as we had foreseen.

I can honestly say that there’s nothing about this project that I would’ve done differently: It all blends together to create a seamless composition of water, materials, light and landscape that I know will always stand among our very best efforts. Yes, bigger jobs may await us, but when it comes to successfully melding visual elements, this one truly takes the prize.

Bob Rush is owner and president of Arcadia Pools & Spas in Arcadia, Calif. The firm was founded in 1948 by Rush’s father, Frank Rush, a pioneering member of Southern California’s swimming pool construction industry and one of the area’s first members of what was then the National Swimming Pool Institute. Rush’s brothers Leslie and Bud took over the business when their father retired in 1985, but they eventually handed the reins over to their brother Bob. Rush attended Arizona State University, earning a degree in business administration in 1965. Today, his company focuses primarily on upper mid-range and high-end custom residential pools and spas in the San Gabriel Valley.