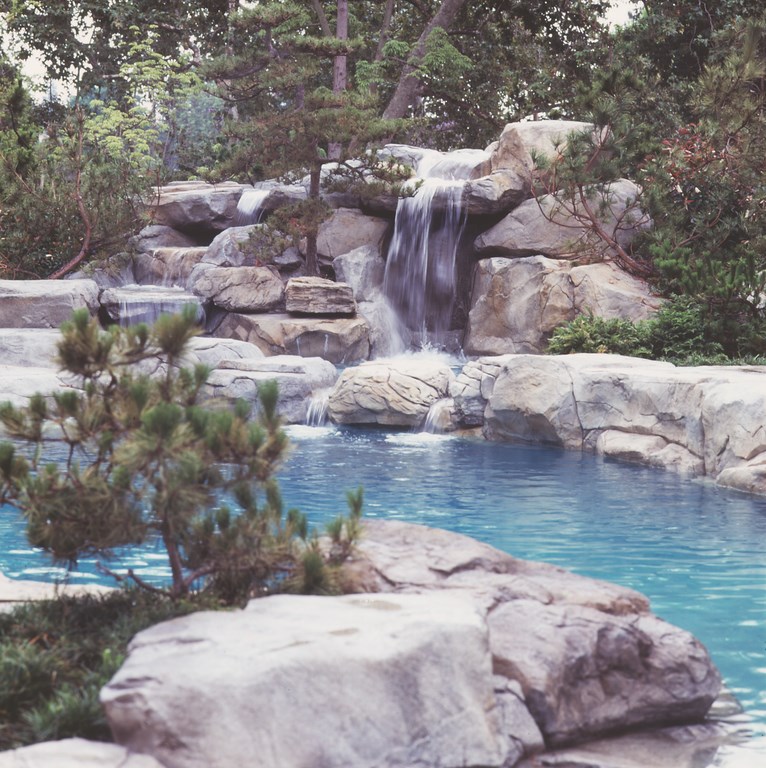 Transforming a tired, old swimming pool into an inviting naturalistic environment is always a challenge, but when the client is Playboy’s Hugh Hefner, the project becomes an adventure as well.

The original lagoon pool at Playboy Mansion West in Los Angeles, Calif., is still in great shape as a result of outstanding design, construction and maintenance. In expanding the property to include the estate across the street, the plan was to create a “luxury annex” for the main compound.

Among the extensive renovations undertaken at the new property was the complete renovation of the backyard and its swimming pool. As was the case with the famed pool and grotto, the concept was to create a rocky focal point – one that would serve as a set for video- and photographic shoots.

Hank Fawcett, the corporation’s construction and facilities manager, headed up the project. He interviewed several firms that specialize in artificial rockwork, looking for one that could design and execute the complete makeover in a six-week time frame. Following a series of interviews and site visits, our firm, Rock Formations of Fontana, Calif., was chosen.

In some respects, the project was typical of many others we’ve done; in others, however, it was the sort of project the only comes along once in a great while.

The existing pool and yard gave us precious little as a starting place. But the free-form shape of the ordinary-looking pool did lend itself to a rock-pool treatment, and we planned to dress it with a flat, natural-looking artificial rock that was to be used in other spots around the sprawling backyard.

That was simple, but the design also called for a naturalistic eight-foot cascade and rockscape to be installed on the slope at the back of the pool, which was actually two feet below the bond beam. The cascade was to fall into a shallow wading area with expanses of flat rock decking – basically to accommodate photographers and bathing beauties.

The company chose not to add a grotto or a waterslide to the pool, because the purpose of the pool was purely decorative – built for aesthetics rather than for recreation, as the original across the street had been. In a sense, the remodeled pool should actually be considered as a permanent “set” that will be used with great frequency as a backdrop for filming and photography. 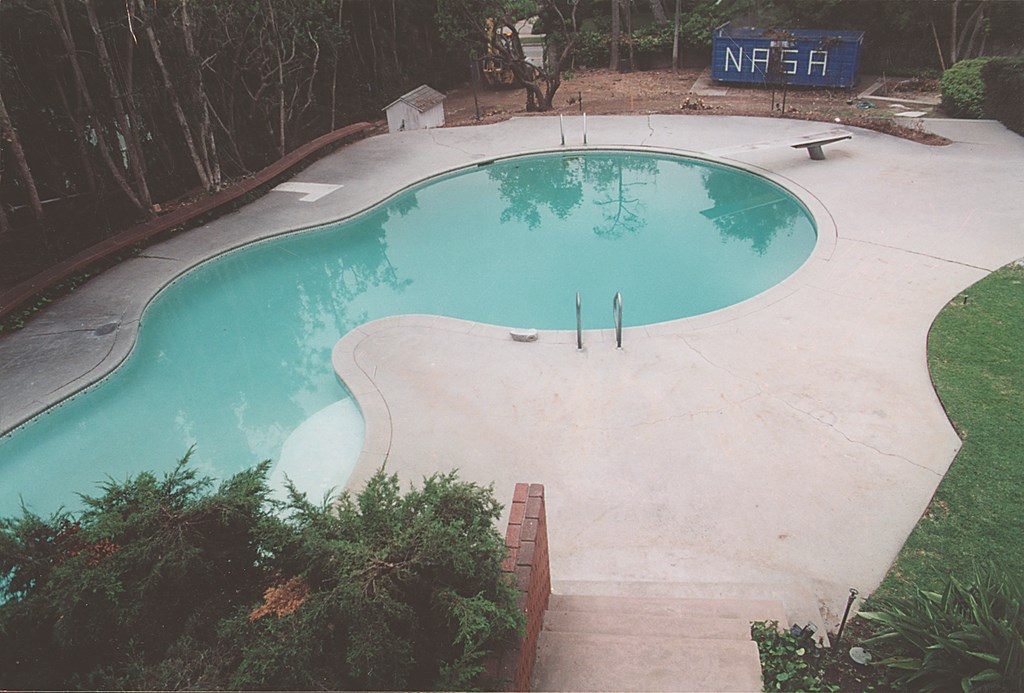 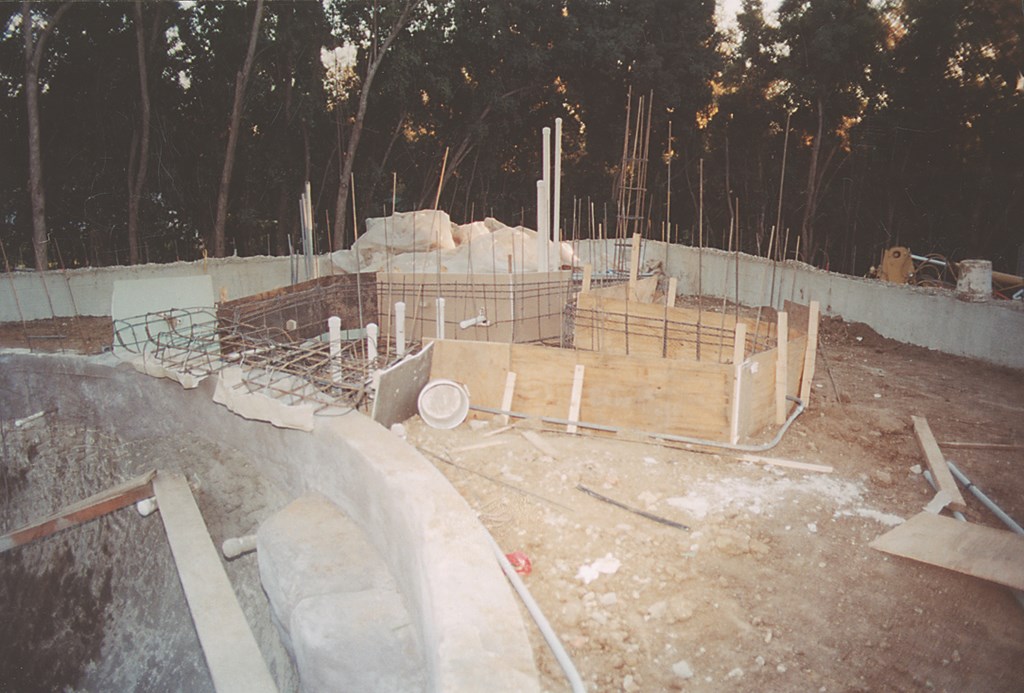 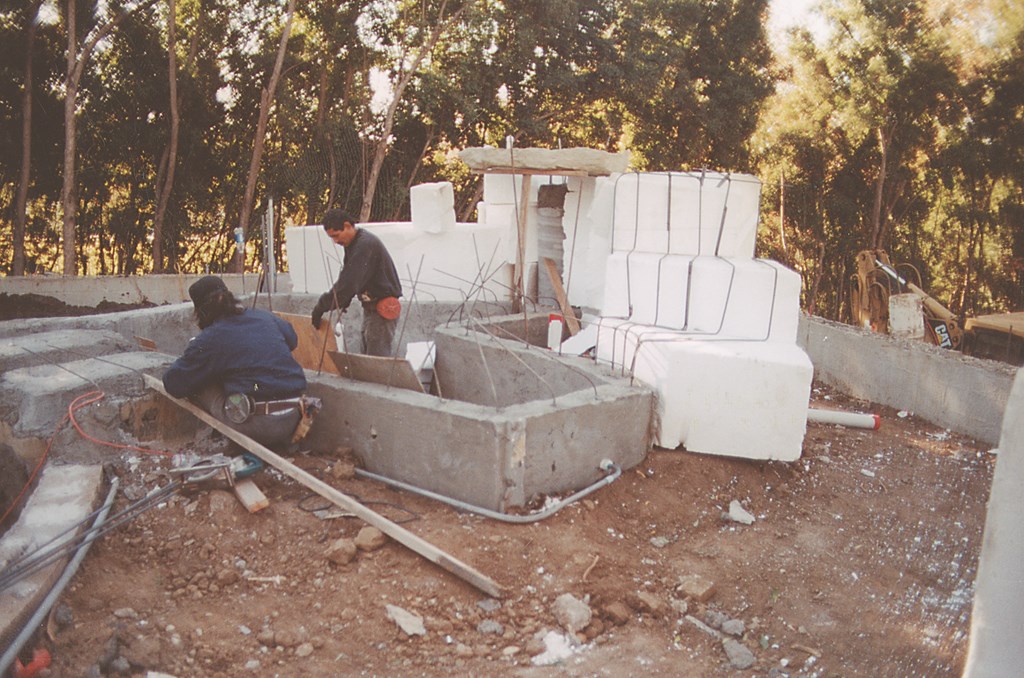 In structural terms, creating the waterfeature required the construction of a new retaining wall and an underground equipment vault. We were also responsible for replumbing the entire pool, installing new electrical and remote controls and replastering. Opposite the rock waterfall, we transformed an old step entry into a rock-textured beach entry.

Two pumps were plumbed to run the waterfall system. One draws water from the wading pool (so it can be isolated and heated for the comfort of the models). A second pump draws water from the pool through the filtration system for recirculation through the waterfall (so that the wading pool’s water can be cleaned and filtered). The system is set up so that only one pump functions at a time.

It was all fairly routine stuff, but the time frame was a real bear: Originally, we were told we had to complete our work before the filming of a Fox-TV special on “The Making of a Playboy Centerfold,” which had been scheduled to air in Sweeps Season in May. Fortunately, the filming was delayed by two months, which gave us a far more realistic schedule to follow.

Even with the reprieve, however, we worked right up to the onset of production. In fact, the Fox crews were setting up as we applied the finishing touches to the rockwork and the electrician was wrapping up his work on the fiberoptic lighting.

The key design directive was to echo the look and feel of the famous pool at the main mansion, which had been designed and built in the early 1970s by architect Ron Dirsmith. But that did not mean that we had to do everything in exactly the same way.

The original, for example, was done with real rock. Given the timeline and budget, the remodel had to use artificial rock – which is almost certainly one of the reasons our firm, which has pioneered artificial rockwork since 1979, was selected to do the job. 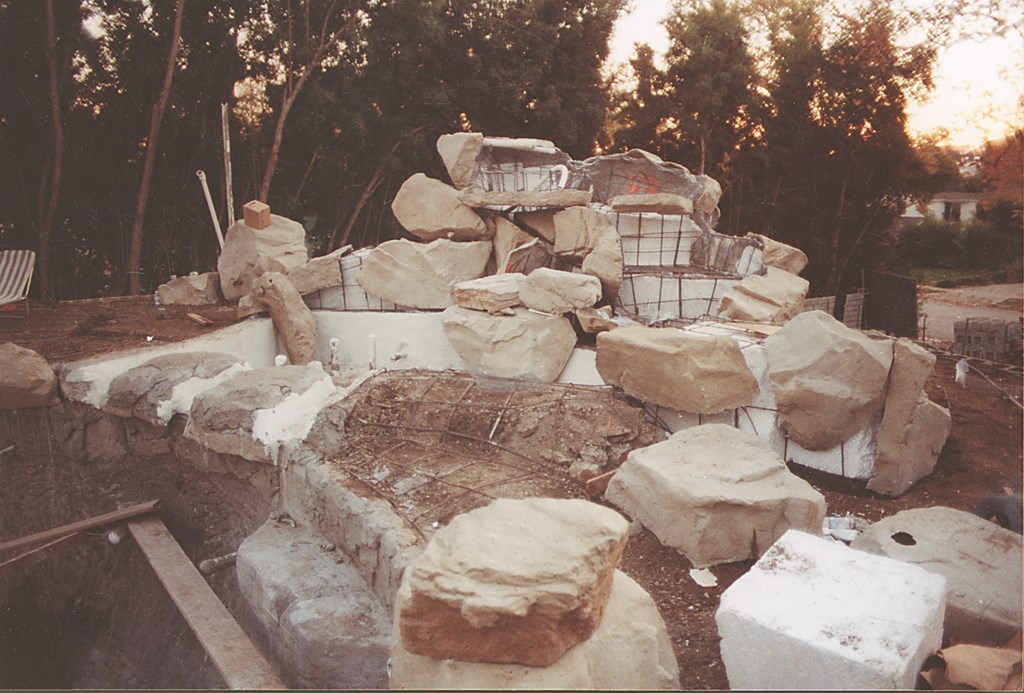 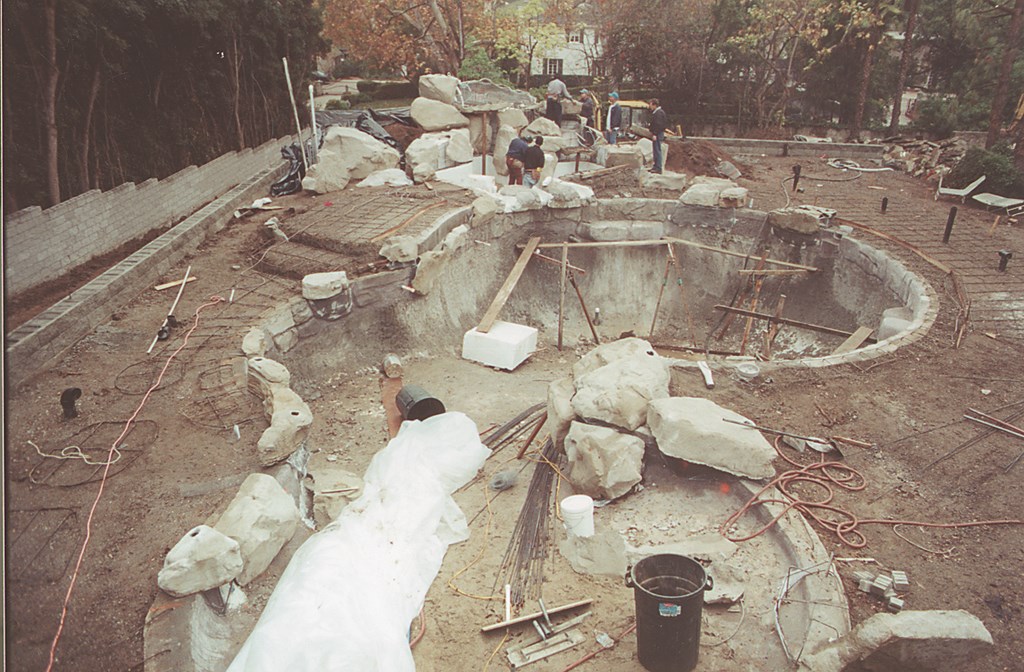 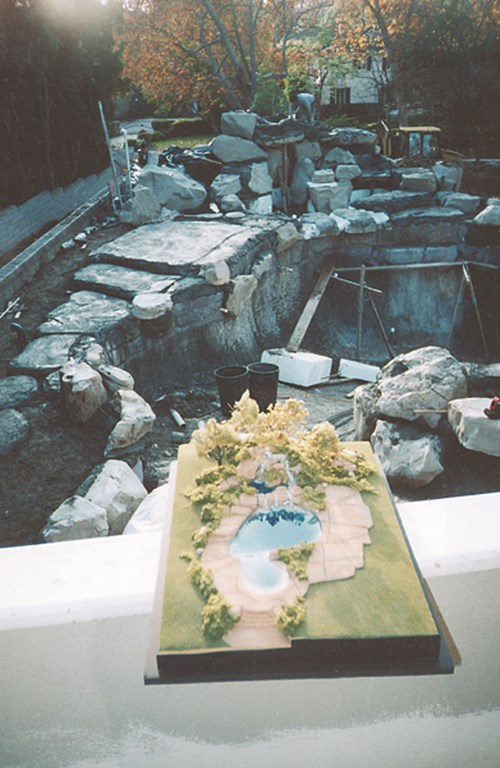 The original had a style we needed to mimic, which meant we had to modify our usual approach and create castings that looked like large, stacked boulders. In addition, the waterfall was designed with several small basins and sheets of water, as opposed to the more irregular cascades that we typically install. As mentioned above, the waterfall is set up as a backdrop for photographers and videographers, which meant we also had to set things up with unusually expansive flat surfaces to allow models and actors to recline and pose for cameras.

To get all the details right, we built a small-scale model of the project – both to enable our clients to visualize the proposed results and to serve as a guide as we constructed the waterfall and its surroundings. 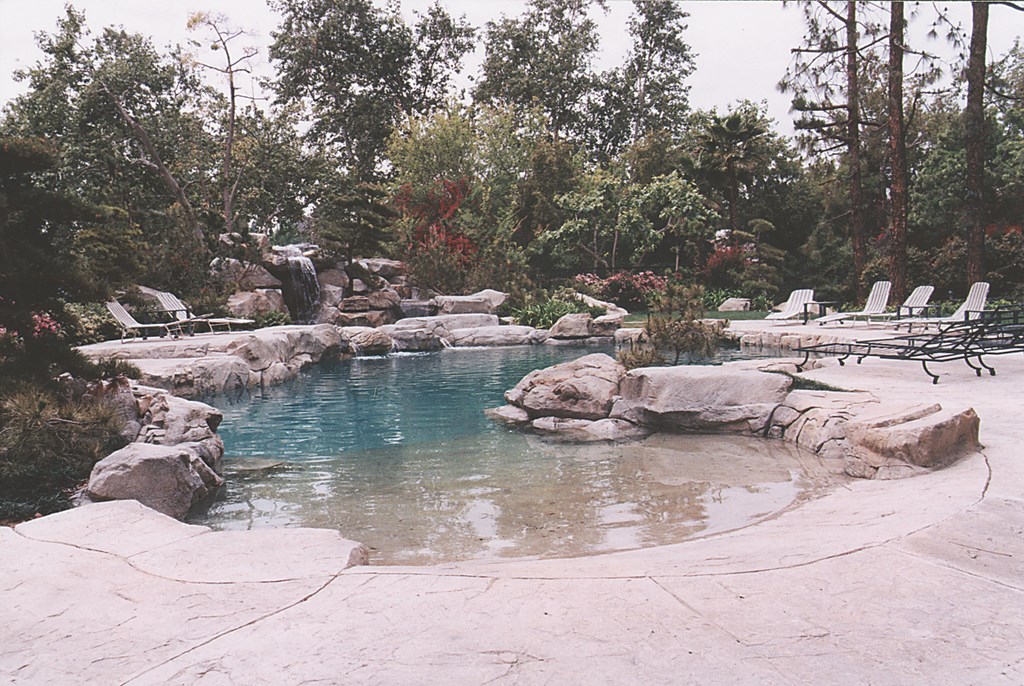 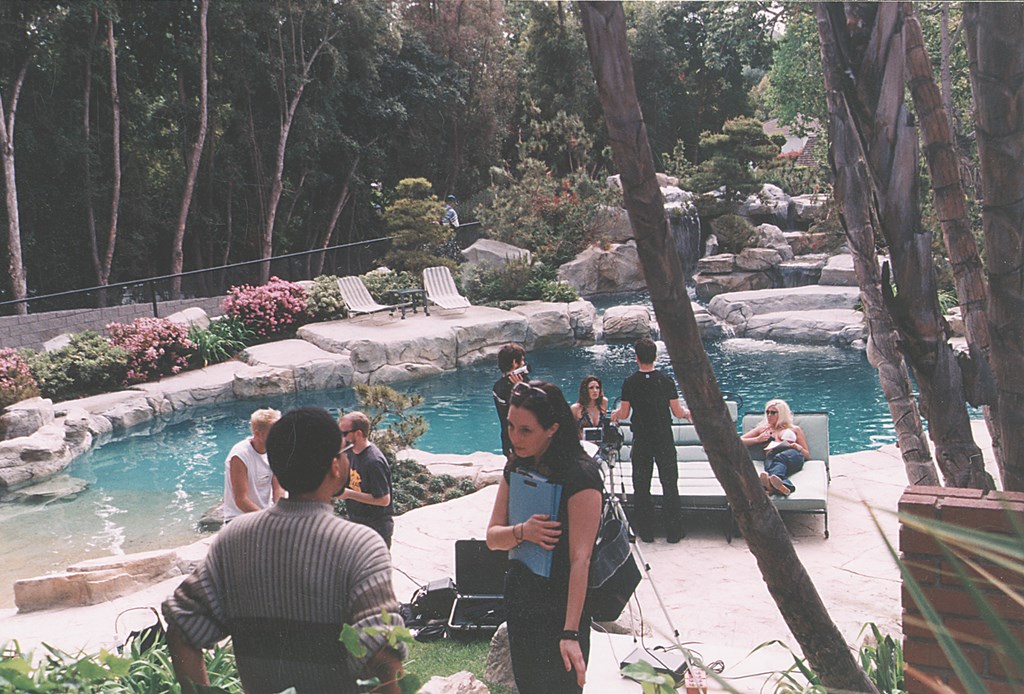 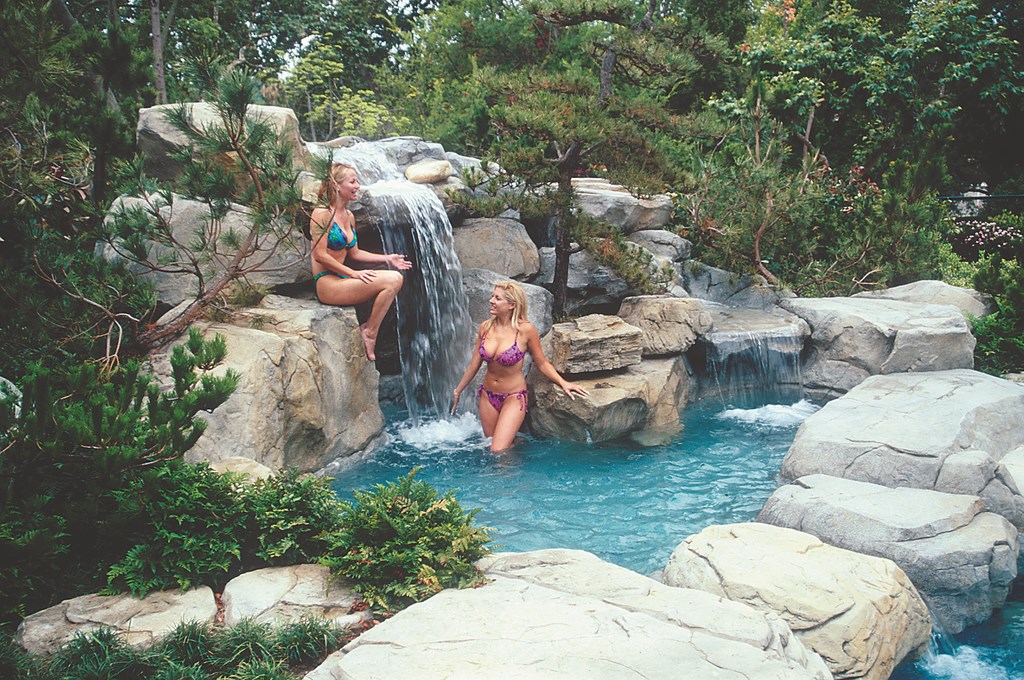 Because the waterfall was to be constructed on a broad, flat area, we spent a good bit of time making certain it wouldn’t look like a volcano erupting at the far end of the pool. Raised decks and planters were set up as important intermediate design elements that enabled us to blend the waterfall structure with the surroundings. Taken together with the background landscaping, the waterfall looks like it belongs.

When you work with Hefner’s organization, you quickly learn that attention to detail is the order of the day. In this case, all of the aesthetic elements were carefully considered and discussed. We suggested that the pool be finished with a pebble surface to blend with the rockwork and help create a naturalistic appearance, for example, but the company opted instead for gray plaster to echo the gray stonework found throughout the main property. (There also were areas in which our suggestions met with better receptions.)

All in all, the folks at Playboy – and especially Hank Fawcett – were extremely accommodating and supportive.

By the time we were finished, we’d placed about 1,000 square feet of castings and approximately 60 cubic yards of concrete. It was a lot of hard, intense work – even with the more workable timetable – but it was mostly fun thanks to the cooperation and support from the people of the Playboy organization. Indeed, their hospitality was something our workers will never forget, especially the free breakfasts and lunches every day at the Playboy cafeteria.

I must admit that we spent some time hoping for playmate sightings, but they proved to be infrequent and rarely amounted to anything more than glimpses of someone strolling from the mansion to a waiting car. But when we happen to see photographs and videos in the future, we’ll all have the added interest of watching to make certain our waterfalls are working as planned!

Bruce Riley has been in the rock and waterfeature business since 1976. He started his own company, Rock Formations, Inc., in 1979, and through the years has built artificial rock features for Disneyland, Raging Waters, the Radisson Hotel in Aruba, several resort hotels in Mexico and a theme park in Taiwan. The company pioneered the use of artificial rock in conjunction with swimming pools and now sells rock castings in addition to training contractors in the use of artificial rock.