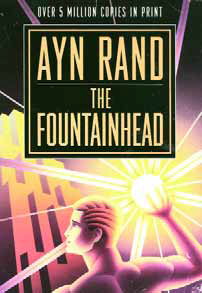 Every once in a while, I find it useful to read something purely for inspiration. Especially as the busy season heats up, I truly enjoy the thought of stepping away from the grind and getting lost in the pages of a good book.

Most recently, I picked up Ayn Rand’s classic, The Fountainhead (Penguin Books, 1994), and found not only a terrifically entertaining story, but one that I also see as useful on the professional front because of its many insights into issues of creativity, design and personal integrity.

Let me start by saying that I’m not offering this unusual entry as an endorsement of Rand’s controversial philosophy. There are plenty of ideas presented in this long, 700-plus-page book that don’t align with the way I see things, and I have no intention here of commenting on Rand’s “objectivism” in any way. To me, the core of the story is so germane to what watershaping is all about that it’s easy to glean useful ideas and pretty much let the rest roll by.

Indeed, the story Rand weaves is one that cuts to the heart of what we’ve seen happening in the watershaping industry during the past several years. It’s about rogue architect Howard Roark, a man categorically devoted to doing things “his way.”

In this, Roark seems a thinly veiled incarnation of Frank Lloyd Wright, and the parallels are obvious: Roark is unsatisfied with the status quo and seeks to create buildings that are beautiful and functional. Along the way, he clashes fiercely with an architectural establishment that is hell-bent on traditional approaches to design.

Another architect, Peter Keating, serves as Roark’s foil: He’s steeped in tradition and is far more favored than is Roark, at least at first. I won’t trace the plot, but suffice it to say that Roark’s star rises and Keating becomes an imitator who comes to envy Roark’s creativity and eventual success. It’s a compelling story, even though it’s a bit too ponderous at times.

Throughout the book, I found all sorts of resonance with watershaping and modern architecture and real-life figures whose work has become influential. Nowadays, in fact, design creativity has become a driving force in our business, with individuals including my fellow WaterShapes columnists David Tisherman and Brian Van Bower doing all they can to break new ground and retool the way the industry looks at design. Roark’s story also brought to mind the career of Robert Mondavi, the winemaker whose single-mindedness Brian has saluted in his column on more than one occasion.

Some works stand the test of time, and this is one of them. It’s amazing to me that a novel Rand first published novel in 1943 is able to resonate so clearly more than 60 years later in ways that seem both modern and groundbreaking.

In the April issue, I covered three books by author Tom Peters on cultural trends and business philosophy and have discovered there was also a fourth in the series. That book, Tom Peters Essentials: Design (DK Publishing, 2005), is all about the importance of design creativity and argues effectively, I believe, that it is at the heart of forging an emotional bond between consumers and any sort of product, from razors to watershapes.

As he writes, “Uniqueness equals emotional connection.” That’s advice we watershapers can literally and figuratively carry to the bank.