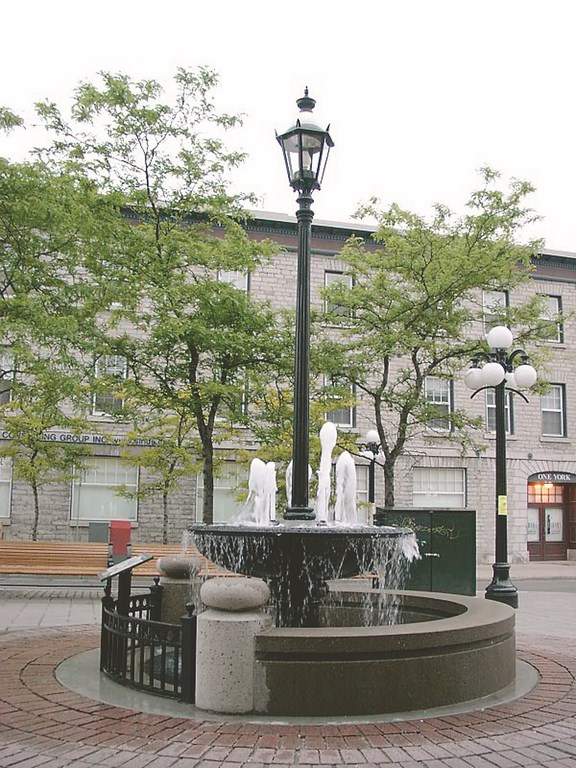 A watershape doesn’t need to be immense to be either beautiful or monumental. Nor does it need to be outsized to serve its community as a gathering place or point of pride.

Those are a couple of the lessons we learned in shaping the York Street Millennium Fountain in the heart of one of the highest profile tourist areas of Ottawa, Ontario, Canada. Using an inventive approach that balanced the needs of the neighborhood, a range of national and local government officials and the general citizenry’s desire to celebrate the new millennium, the project also embraced the city’s own rich history.

The new fountain sits at a significant crossroads of pedestrian traffic between the Byward Market and the government district in downtown Ottawa. Indeed, the traffic island surrounding the fountain stands just blocks from Parliament Hill, the seat of Canada’s national government, and was intended from the start to serve as a focal point and gathering place.

Although small and comparatively simple, the project was complicated by the need to satisfy both local and national officials, which meant we had to incorporate details established by others and provide extensive documentation that could be easily reviewed and understood. In addition, we needed to take the historic nature of the setting into account in settling on a new design. In short, a great deal of work was to go into creating even a small fountain for the site.

In this case, the design process involved working with some pre-existing conditions and requirements. We needed, for example, to work around six existing trees and their planters while incorporating them into our new design, tie directly into existing utilities and make the new features blend seamlessly into the surroundings and architecture.

There was also the fact that the fountain had a historical precedent – a simple structure where horses had been watered and local citizens had come to get potable water before the modern city emerged.

Fortunately, we at Altorio Design Consultants are based in Ottawa and have our own extensive history of working in the downtown Ottawa area. Past projects have given us a deep understanding of the area’s character and history, and we knew fully what we were getting into in taking on the design of the memorial fountain and its surrounding space. 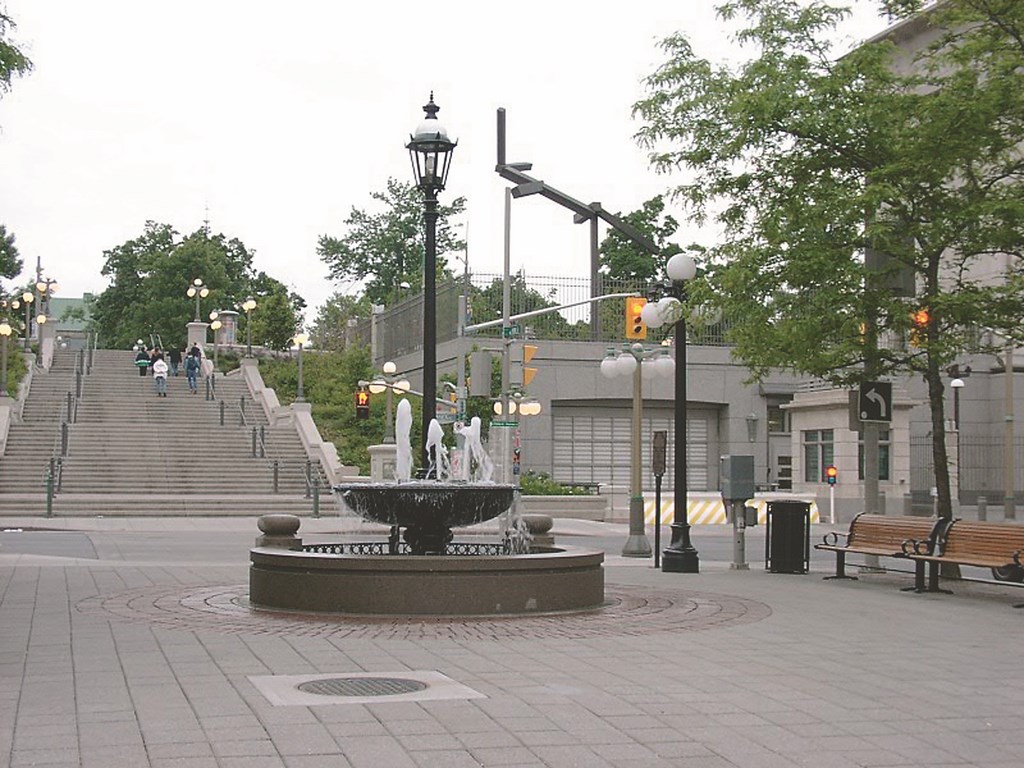 Previously, we had worked on site improvements at the Supreme Court of Canada, developed the landscape design for an addition to the Ottawa Health Sciences Centre, executed a streetscape design for the 340-home Longfields community and created an award-winning design for a commercial plaza at Centrepoint Drive and Strathbury in Nepean. Perhaps most important, we’d also worked on the York Street Streetscape, a unique historical business district in the Byward Market area.

The Streetscape project was directly adjacent to the site chosen for the new fountain, and our involvement had definitely played a role in our selection as the landscape architect for the York Street Millennium Fountain. The earlier project had included parking, planting, lighting, paving and street furniture and had been credited with helping to revitalize an area that had become somewhat rundown – but has since emerged as a major tourist attraction.

It’s really a grand neighborhood. The fountain site is close to the Canadian Prime Minister’s residence, the Royal Canadian Mint, Canada’s National Art Gallery, Parliament Hill and the British and French embassies – as well as the new American embassy just across the street.

As mentioned above, the 60-by-60-foot traffic island had housed a fountain that provided drinking water for both people and horses. The old fountain had been dismantled approximately 100 years ago, and the new project called for recreating this old-town atmosphere in a modern context. 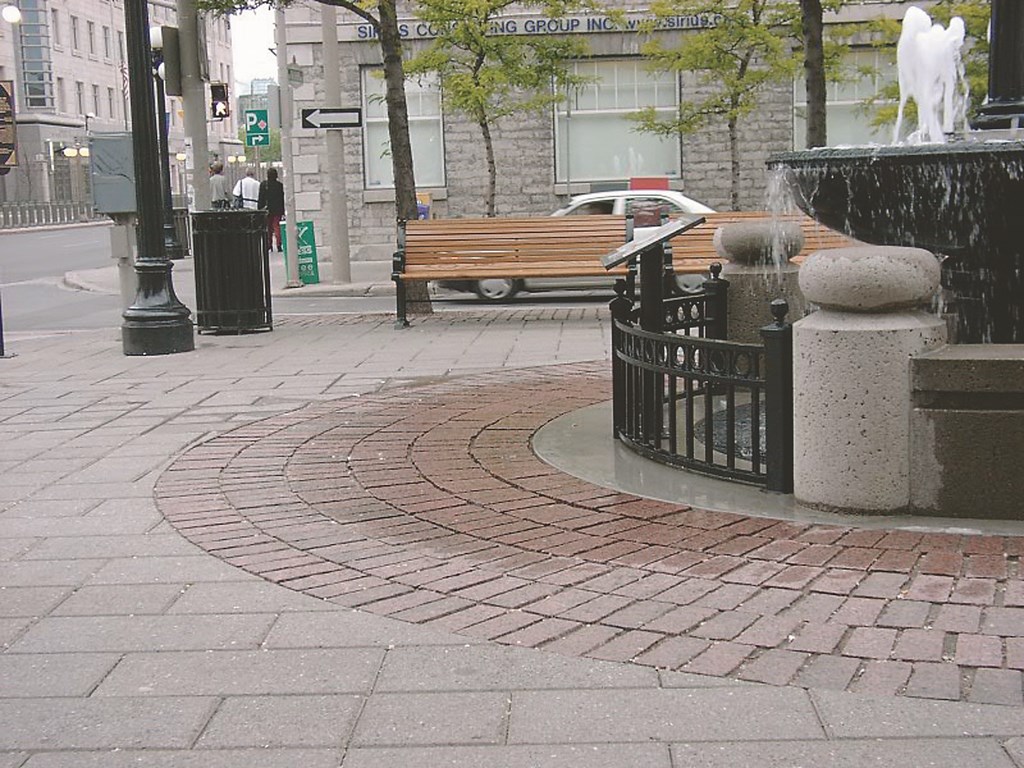 The new fountain is indeed fashioned after the original, with an iron basin, modest vertical plumes and a large light standard jutting above. The one major difference between old and new is that water in the new fountain is strictly decorative.

Just as with the original, the new watershape is meant to be a gathering place. The island includes benches, a kiosk, trees and decorative pavement, and the whole arrangement is intended to make passersby comfortable as they enjoy the fountain and consider its celebratory millennial meaning.

In creating the conceptual design for the area, we worked around the six trees but chose to eliminate the planters so they would stand flush with the ground. We also placed the fountain at the center of the island to make it the obvious focal point – highlighted further by an ornamental rail fence and a radiating paving pattern.

We also used a wide range of materials on the island, including granite in the radiating pattern, concrete for the main sidewalk along one side and a horseshoe-shaped bench framing the fountain. We also set up old-style cast-iron posts with ornamental globe lights and placed commemorative plaques at strategic locations around the site.

Echoing forms found elsewhere in the vicinity, the paving pattern followed a look we’d developed ten years earlier in the renovation of York Street. Taking this visual shortcut helped us stick to a tight deadline in anticipation of Canada Day celebrations on July 1. (We met the schedule, but the overall project ended up being delayed due to availability of materials.)

A more significant contribution to staying on schedule was made by our use of a CAD system called VectorWorks, published by Nemetschek North America of Columbia, Md. As discussed in more detail in the sidebar on page XX, this system made it possible for us to generate drawings, incorporate changes and provide all the documentation local and federal officials needed to be comfortable with the project in matters of hours rather than days or weeks.

When we started our work on the design, we received paper drawings of the existing underground services and transferred them to CAD for layering. We also received the island “design concept” as a computer file from the National Capital Commission – an important source, as it is ultimately responsible for historic preservation in the capital area. This saved us the time and labor that would have been involved in re-creating it in our computers from scratch.

Small as it was, the project created a blizzard of documentation, including about 20 detail drawings on A-size sheets for various concrete benches, paving around the fountain, curbing and other features. We also designed a base for the fountain as well as a donut-shaped concrete bench structure – and integrated the two pieces within the CAD program. 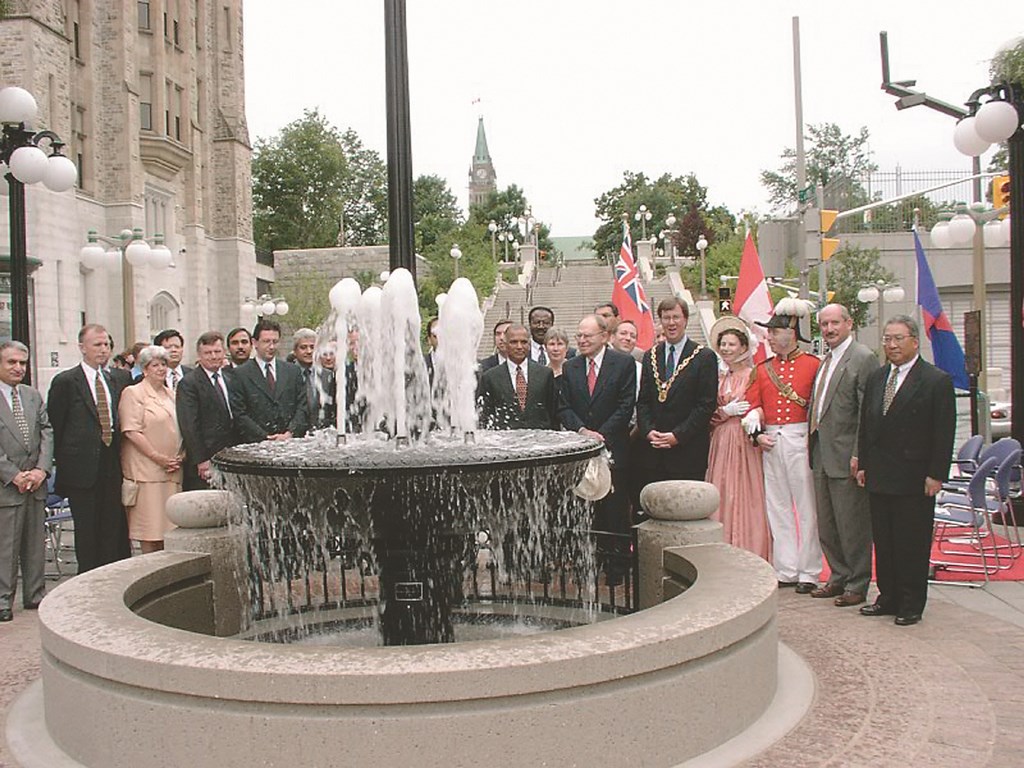 Contractors used all these drawings to build from in the fountain area. More important, the multiplicity of these drawings and the overall level of documentation we were able to generate through our CAD program was more than enough to satisfy the variety of officials and agencies who had a hand in the project’s overall management.

Despite the delay in its dedication, the fountain and surrounding plaza came together smoothly – and immediately began serving their purpose as pedestrian center and meeting place. Ottawa Mayor Jim Watson dedicated the fountain August 11, 2000, on behalf of the citizens of Ottawa and the City Council.

The project was sponsored by the City of Ottawa and by the federal government through the Canadian Millennium Partnership Program. In unveiling the centerpiece fountain, Canada’s Deputy Prime Minister Herb Gray said, “This fountain not only beautifies the downtown core, it also stands as a testament to the spirit and perseverance of the people that built this city.”

John J. Altorio is the principal of Altorio Design Consultants/Landscape Architects in Ottawa, Ontario, Canada. The firm was established in 1981 as Altorio Associates Ltd. and has since developed a solid reputation among its clients by offering a full range of services, including detailed design and site supervision as well as feasibility studies and preparation of reports. Whether as prime consultants or part of inter-disciplinary teams, the company specializes in providing competitive, cost-effective, low-maintenance designs and has been a key participant in numerous high-profile projects in Ottawa and eastern Ontario. Altorio is a member of the Ontario Association of Landscape Architects (among other professional affiliations) and regularly serves as a part-time instructor in courses on computer-aided design and landscape design, graphics and construction at Algonquin College in Nepean, Ontario.