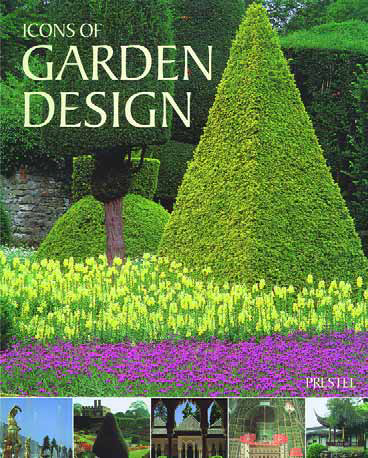 If you’re looking for a broad overview of the world’s most significant gardens, their styles and the designers who created them, Icons of Garden Design may well be just the book for you. The 174-page text, edited by Caroline Holmes and published by Prespel Publishing in 2001, consists of dozens of well-illustrated articles from a variety of writers who cover an amazingly broad range of famous designs and designers.

The book’s coverage reaches back to 300 B.C. and comes to a close in the here and now. Along the way, you visit the grounds of Versailles in France, Chatsworth in England, the Peterhof in Russia and an array of gardens less well known to most of us educated in the Western world, including fantastic spaces in Japan, China, Turkey and Central Asia.

The range covered here is impressive, to say the least. There are descriptions of extremely formal designs, including the Alhambra in Spain, as well as examinations of the works of stylishly informal designers such as Gertrude Jekyll, the renowned English designer whose name has become synonymous with cottage gardens.

The oldest place under discussion is Sigiryia, an elaborate set of pavilions, pools and gardens built in Sri Lanka nearly 2,300 years ago, and the text examines some of the key achievements in the long history of Japanese gardening, including the Byodo-in, one of the few remaining examples of the 11th-century Heian style that featured space-hungry lakes and islands. There’s also an account of the creation and history of the hypnotically beautiful Taj Mahal.

Some spaces are observed through time. We see, for example, the evolution of the famous Stowe garden in England, where legendary designers such as William Kent and Capability Brown worked in different styles at different times through the years. There are also interesting and enlightening accounts of the lengthy development of the grounds of Thomas Jefferson’s Monticello – and, at the other end of the spectrum, an examination of harried birth of Frank Lloyd Wright’s Fallingwater.

As mentioned above, this little volume carries us up to the present and to avant garde designs by Mexico’s Luis Barragan and Scotland’s Ian Finley, both of whom have been extremely influential on modern design – but in distinctly different ways. The text also visits U.S. gardens by masters such as Daniel Kelley, who designed the famous Miller Garden in Columbus, Ind., and is considered the father of modernism in American landscape architecture. There are descriptions of the residential creations of Thomas Church and many others as well.

Although the book covers the broadest conceivable range of designs, the text does an admirable job of tracing the evolution of styles and of pointing out key influences and connections among many of our greatest architects and builders. But it’s not just a history lesson: The book is filled with a huge number of design ideas ready for translation to new projects. And throughout, there are terrific examples of the use of water, from lakes and ponds to fountains and swimming pools.

Yes, it’s a fast-paced tour, and for greater detail you’ll need to look elsewhere. In that respect, the book helpfully includes an extensive list of references you can dig into for more information. Personally, I found a long list of books I’ll be picking up in the near future – and I know you’ll do the same.