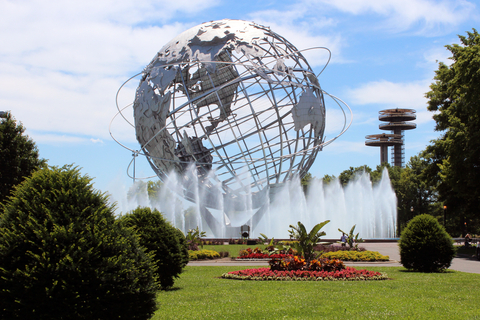 I started to appreciate the fact that my Aunt Genevieve was one of the coolest women in the whole wide world in the Spring of 1964.

In the days just after the New York World’s Fair opened that April – while the networks and newspapers were still agog about one pavilion or another and how amazing the whole scene was – she sent a small package to me in California containing an embossed, gold-leafed invitation, a fair ticket and a keychain with a medal depicting the Unisphere attached to it.

Even at eight years old, I knew my aunt was a big deal: In that summer of 1964, she was the Democratic Party’s candidate for U.S. Senator in Pennsylvania and narrowly lost to the incumbent in November. Through that year, she found herself being invited to all sorts of events we kept seeing in the news in California – including the Grand Opening of the World’s Fair.

Ever since I first saw that keychain, I’ve been a bit obsessed when it comes to the Unisphere, which I’ve always thought was one of the best things ever. I didn’t see it the first few times I visited New York, but I made a point of visiting Queens on another trip in 1980 – and was utterly transfixed by the steel globe, mostly because it was way bigger than I had ever imagined it could be. 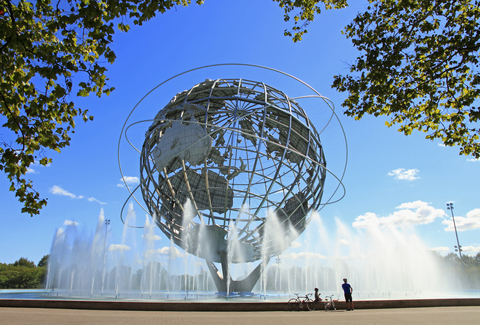 Designed by a landscape architect named Gilmore D. Clark, the Unisphere is 120 feet in diameter. The 304L stainless steel from which it was fabricated by U.S. Steel weighs in at 350 tons, excluding the massive base. The fountain jets rising around the base serve the worthy design purpose of obscuring the supports and making the globe seem to float in space.

When I saw it the first time, the fountain wasn’t functional – a deficit that wasn’t addressed until the Unisphere’s 30th birthday in 1994. That anniversary fix didn’t last long, however, so the jets were off when I visited again in 2003, and I still have yet to see the globe as its designer fully intended. My understanding is that further restoration work was done a few years back and that the jets are now in good working order, so maybe the third time will be the charm for me?

In looking at videos and photos, it’s clear that the fountain system plays an important role in the Unisphere’s overall impression: Without the water, it seems heavy and earthbound. With the jets in action, however, it’s lifted up and even gives a fleeting illusion of rotating on its axis. (Again, I do admit to being obsessed).

To see a wonderfully dated (but still fascinating) 1960’s documentary on the fabrication and construction of the Unisphere, click here.

To see a brief video that gives a clear sense of the Unisphere’s scale (especially when you see people approach the base from a distance and see how tiny they become), click here.