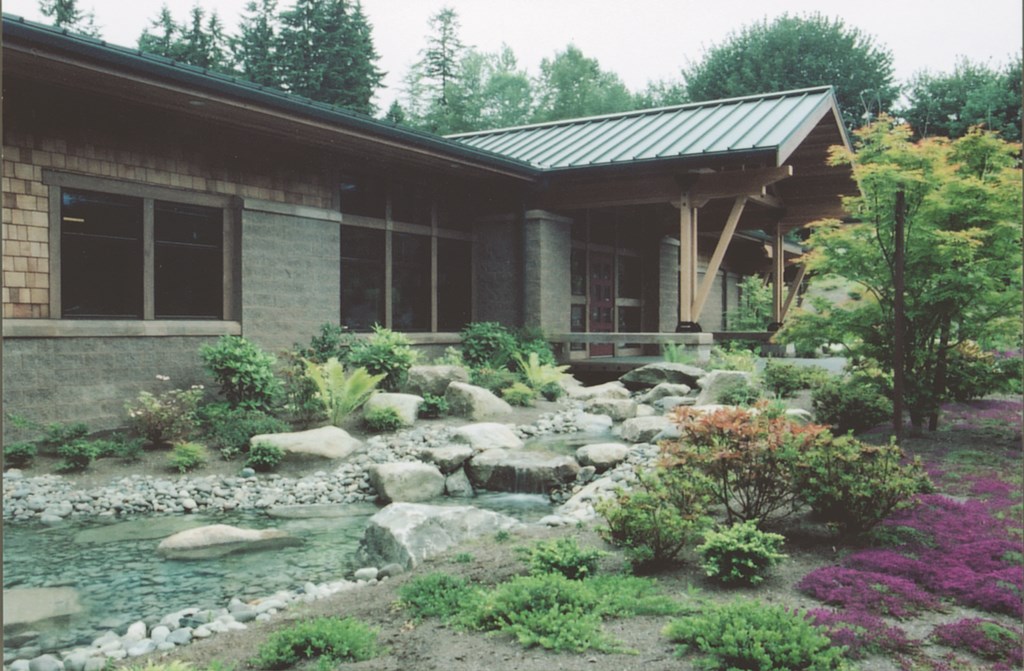 Sometimes it’s the small things that give a project its character and value.

In the case of landscape design and installation at the Cross Valley Water District facility, we were able to take a relatively modest property and transform it into a demonstration campus that illustrates how man-made environments can be used to enhance the natural surroundings and meet the needs of human beings – and do it all with grace and harmony.

I became involved in this project in June 1998, when I was approached by Brandt McCorkle, Lee Beard and Galen Page of Page & Beard Architects. That firm had been chosen to design the water district’s new headquarters building and had developed a craftsman-style structure that blended perfectly with its rural, wooded surroundings.

Set on five acres in Clearview, Wash., the district office serves the needs of customers who still pay their bills in person and are accustomed to a gentle, small-town pace. Given this slow but steady flow of visitors, the district’s managers wanted an exterior space that offered the public (and its employees) a pleasant and even meaningful experience.

This goal was met by including a meandering waterfeature as part of a design that focuses on proper soil amendment, appropriate plant selection and a spirit that is compatible with the surroundings, both visually and ecologically.

Known as the Cross Valley Water Association when it started in 1964, the public utility had a mere 328 customers in 1967. By 1989, the association had grown to the point where it reorganized as a municipal water district, but even now it has just 5,450 customers. This is indeed a small community.

Nearly 90 percent of the district’s water comes from wells, and the rest is purchased from the nearby city of Everett. By the mid-’90s, the organization had outgrown its original 2,100-square-foot office and commissioned Page & Beard Architects to design a facility that addressed the need for space as well as the managers’ sense that whatever they built should fit naturally into its surroundings. 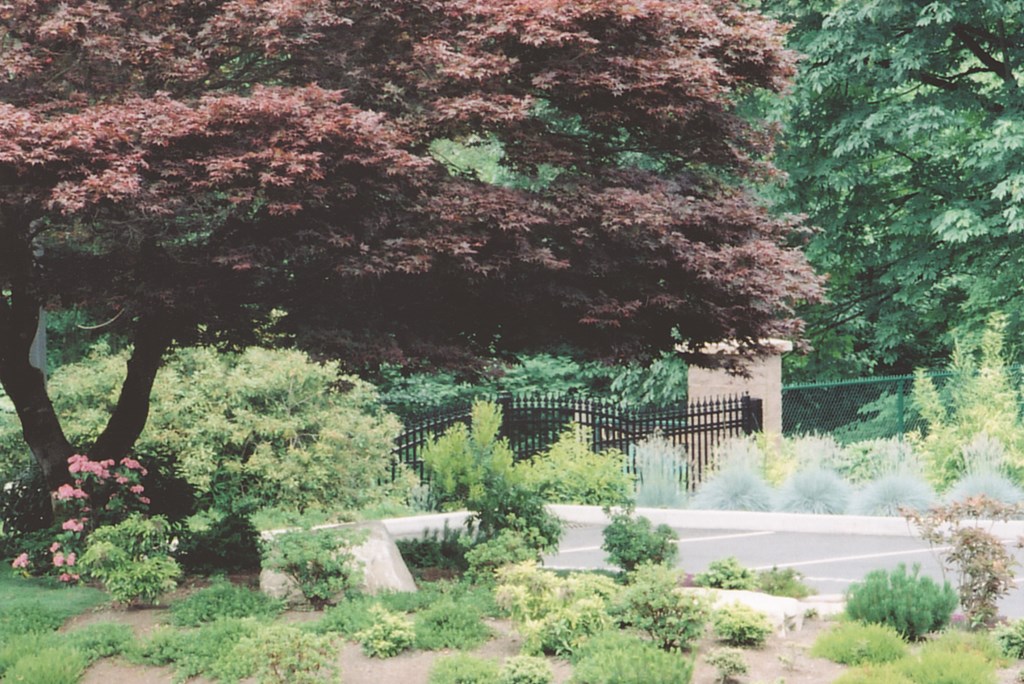 It’s all in the details. Even the visually weighty structure that supports the broad entryway makes a statement about conservation of old-growth trees through its use of glue-lam members rather than solid wood timbers. The gabled entry vault opens into the lobby and carries through the interior, creating a sense of rhythm with composite trusses that support a finished-cedar ceiling.

The warmth of these natural materials creates an engaging, soothing workplace and efficient business environment. That feeling is felt especially in the perimeter offices, many of which overlook broad garden views – which is where my contribution comes into focus. 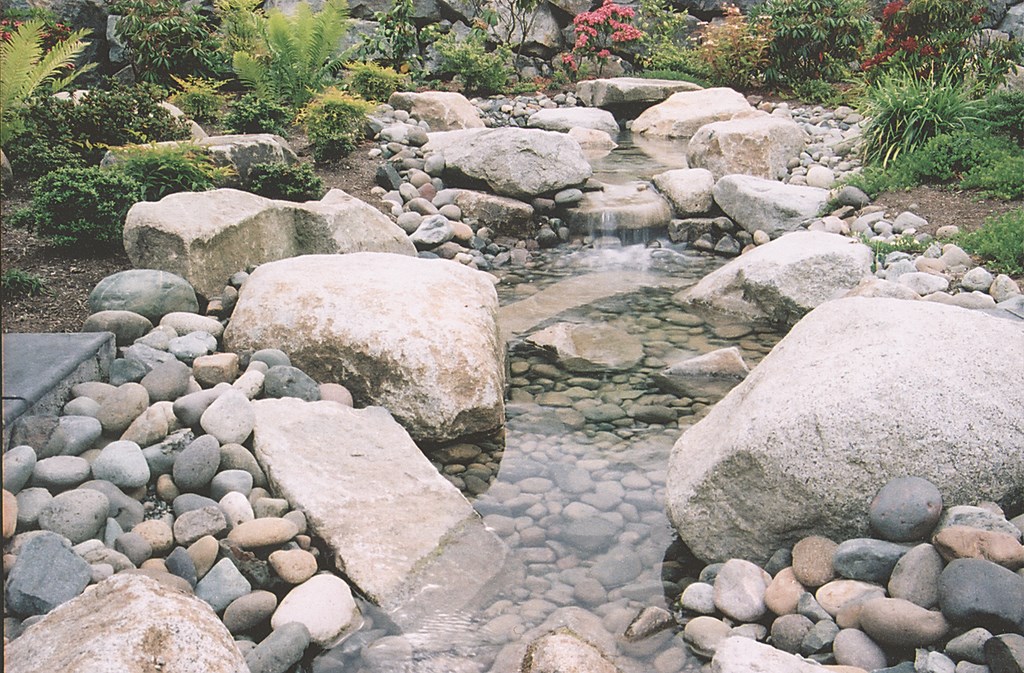 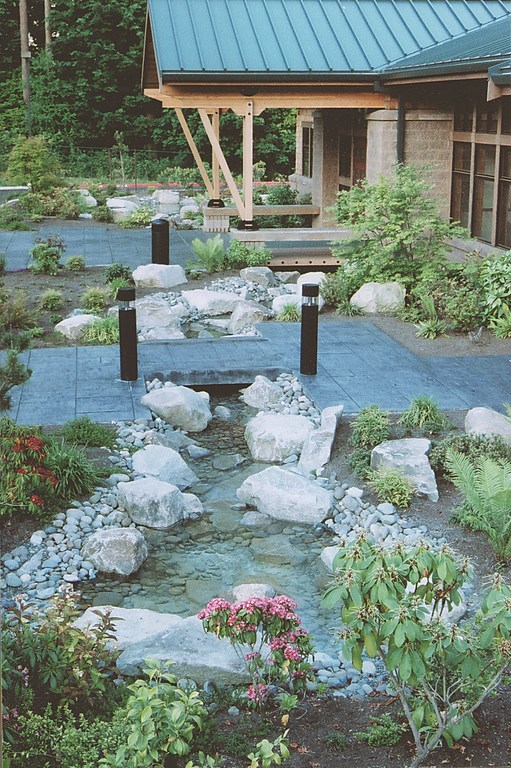 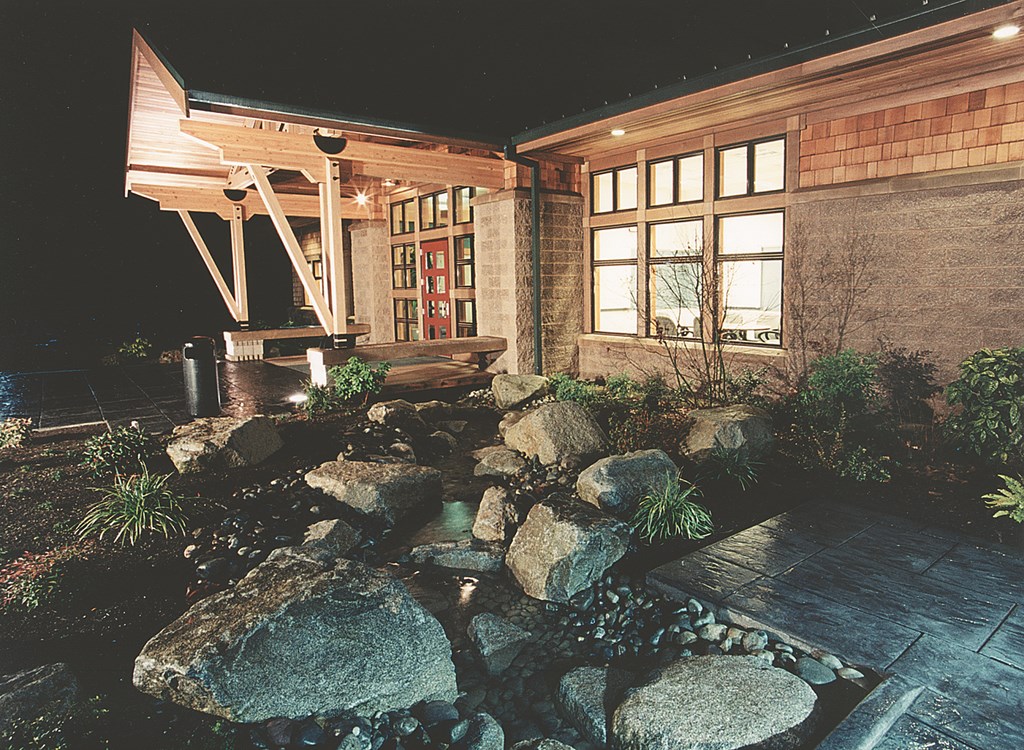 When I initially discussed the project with McCorkle and representatives of the water district, I saw a definite opportunity to bring outside views into play as an extension of the building’s interior spaces. I’ve spent a great deal of time traveling in Japan and in studying Japanese garden design, an experience that energizes me whenever I see ways to make connections between interior and exterior spaces and to use landscaping to express an appreciation of nature in a man-made setting.

All of this was on the table with this project, and as I looked at the architecture and processed what the district managers were saying about their desire to demonstrate positive environmental stewardship, we all began discussing ways in which the landscape could be used to tie everything together in a meaningful, expressive package.

Originally, it was Page & Beard’s idea of placing a stream at the building’s entry. Quite sensibly, they try to incorporate waterfeatures into all the projects they do for water districts – whether inside or outside the building – as an appropriate symbol of the services being provided.

As we focused on what we wanted to accomplish together, we came to the recognition that our work was being driven by the idea that there is interconnectedness between soils and water quality and that proper management of that relationship could be used to minimize the impact of urbanization on the natural environment.

To turn that high philosophical concept to reality, we began by leaving well enough alone through a couple of key decisions. First, we retained a buffer of significant trees near the street as well as a gorgeous Japanese maple that now serves as a centerpiece for a circular drive in the parking lot.

Second, we developed a soils-amendment program and a planting plan (each described in detail in sidebars appearing with this article, including the first at right and one below) that self-consciously embodied the concept of responsible stewardship.

Third, we chose to harness a small natural spring on the water district’s original site on an adjacent lot to feed a decorative watershape on the new site. Although water, ironically, was not part of the water district’s initial wish list, the meandering stream and pond at the front of the main building are now key visual features – and perhaps the clearest embodiments of the project’s prevailing spirit.

The stream runs for about 100 feet along the front of the building, flowing beneath a small bridge at the entrance and terminating in a 40-by-15-foot pond. Much of the stream is visible through office windows that bring workers and visitors within a few feet of the tranquil, slow-moving water.

The stream drops just 14 inches from headwaters to pond, so we had to be deliberate in setting up the small falls and cascades, the largest of which is located at the transition from the stream to the pond. For the most part, the water in the stream is only a few inches deep, while the pond is no more than two feet deep at its lowest point. 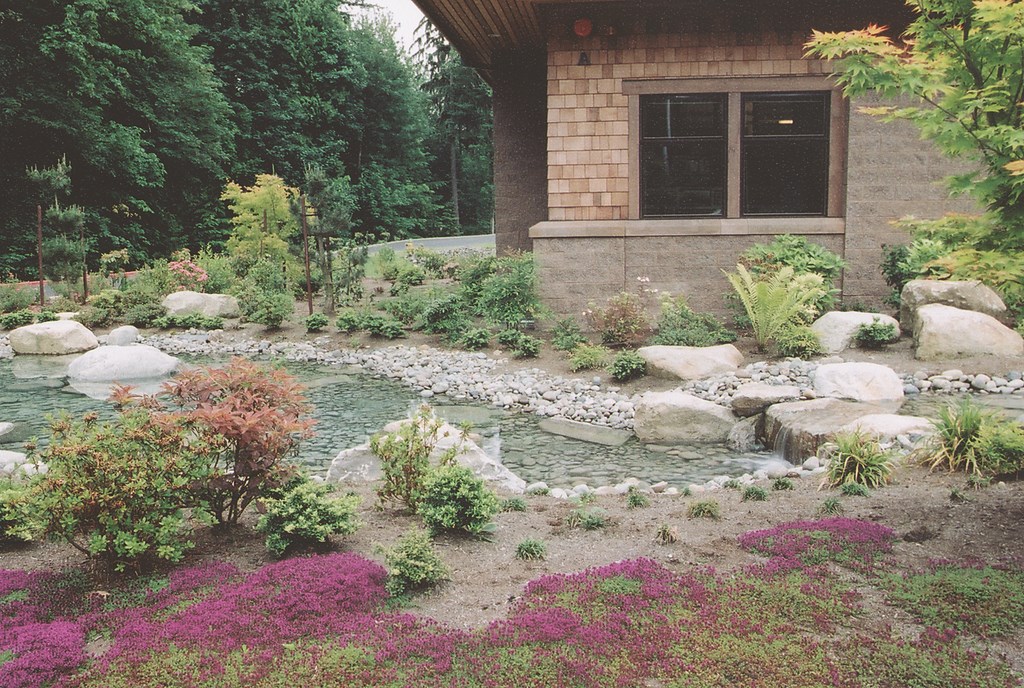 Installation of the stream was expertly handled by Land Expressions of Mead, Wash., a landscape architecture/construction firm that, in my opinion, does absolutely beautiful work. This installation was no exception: I worked with company founder Dave Nelson to create a watershape that was significant enough to command attention, but retiring enough to blend seamlessly into its tranquil surroundings.

Working with a structure made with a concrete-covered liner, the Land Expressions crew made intuitive use of small, rounded river rocks and Bandera granite, which was used throughout the site for its rich brown and gray colorations and smoothed edges that emulated stone shaped by water and the elements through time.

The gentle contouring of the soil, the careful placement of stones and the expert execution of delicate edge treatments all came together to give the space a sense of orderly composition, but at the same time there are sensations of a natural, random beauty.

In our desire to make the stream and pond friendly to our plants and local wildlife, we set up a water treatment system that uses a small ionizer and ozonator. The water flows to the pond, where a skimmer pumps it back to headwaters that emerge inconspicuously from beneath a small rockery at the top of the stream.

The natural spring is up the slope from the stream and flows by gravity to the headwater area. We don’t need to worry much about the stream running dry – quite the opposite: Because of the extensive rains that fall in the region, we had to accommodate the possibility of significant overflow by setting up a series of “bio-swales” that will capture excess water and allow it to percolate into the soil.

Early on, district managers had been cool to the idea of a watershape, mainly because of the anticipated cost. We worked hard to convince them of the visual appeal the stream and pond would lend to the space and also to persuade them that it was an environmentally conscientious approach – an approach that would demonstrate their good stewardship in showing while providing an excellent public display of creative ways to detain and slow surface runoff.

The clincher, however, was demonstrating that we could make budgetary room for the project by eliminating the irrigation budget through use of water-wise plant material for most of the space – and by allowing the lawn, which was set behind the main building and an area earmarked for future development, to go brown during the summer.

As it has turned out, the stream in particular has become the facility’s hallmark. After all, it can be seen from many of the spaces and offices inside the building, and every visitor and employee who enters the building crosses over its bridge. District personnel have told me time and again how much they enjoy the beautiful scenery it provides and the gentle sounds it makes, and they’re proud of the positive comments they hear from visitors. 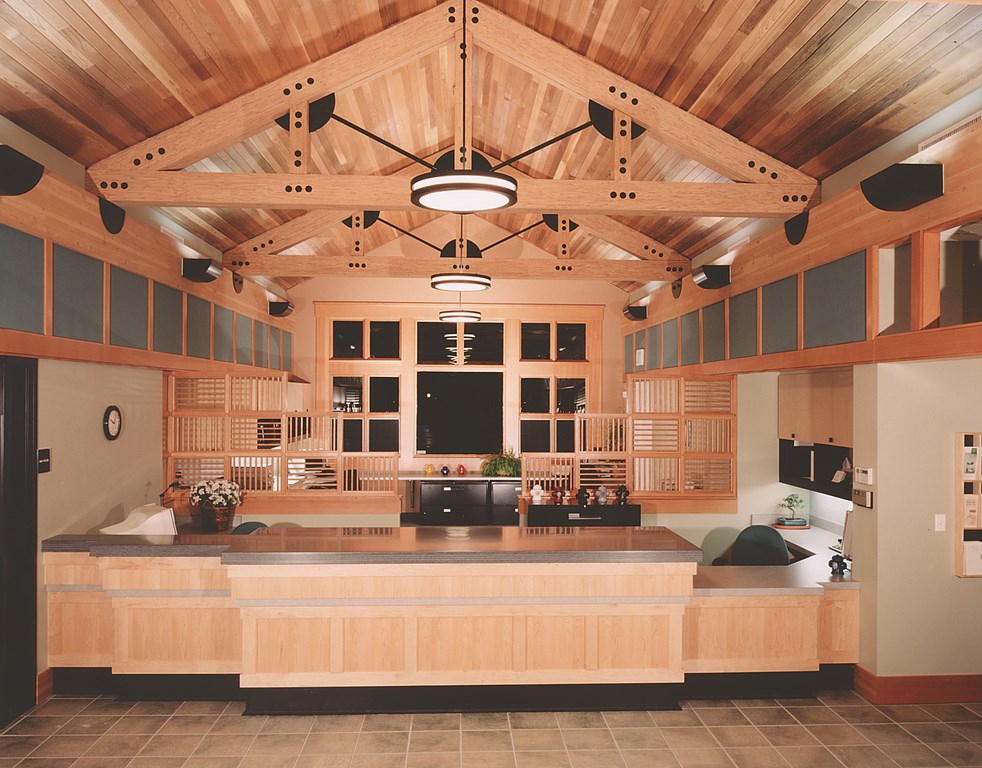 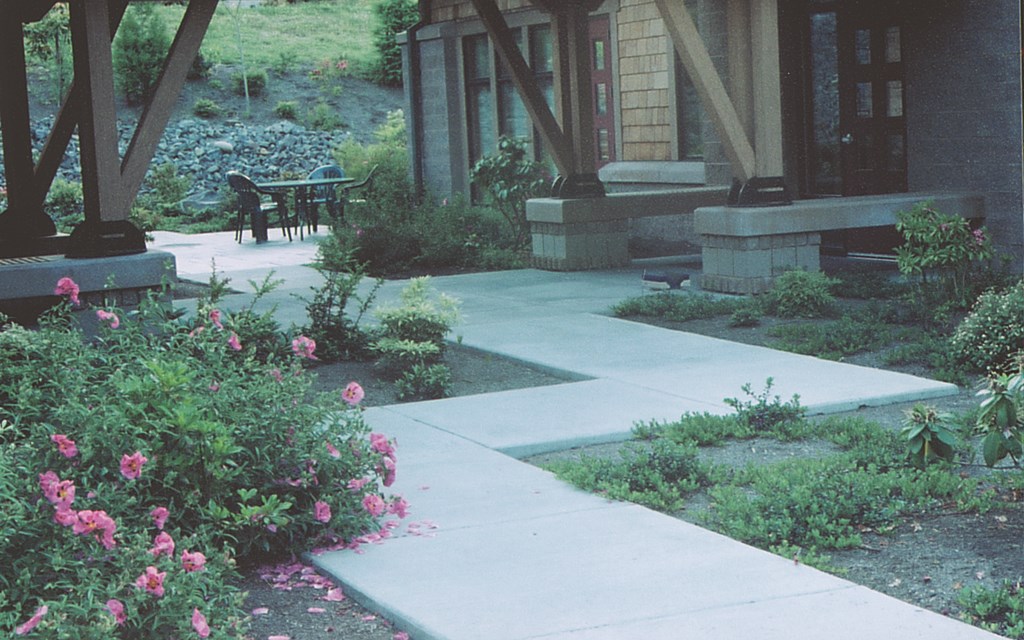 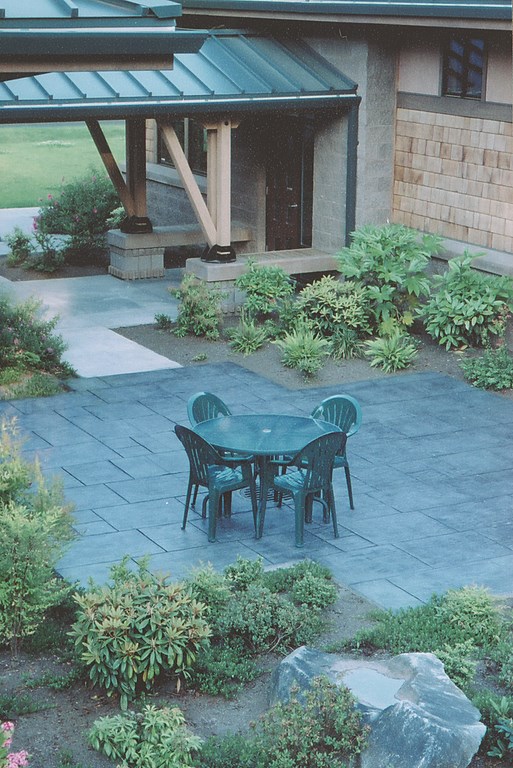 There’s no great drama here, just a careful balancing of plantings, rocks, water and soils that give this project its distinctive visual appeal, sustainability and spirit.

My hope is that this sort of low-impact design sensibility will catch on with other designers and clients. The way I see it, it’s a commonsense approach founded in a desire to retain natural features and minimize the effects of construction without sacrificing anything when it comes to the enjoyment of those who occupy these built spaces.

I give tremendous credit to the staff at the Cross Valley Water District, the professionals at Page & Beard Architects and Land Expressions and the other contractors and engineers who enthusiastically embraced the values embodied in this project. With healthy soils and clean water in place, man-made spaces such as this one can delight and satisfy human beings while playing a role in preserving the natural beauty that remains around us.

Sandra Hasegawa Ingalls is president of Foresight Inc., a landscape architecture firm in Bellevue, Wash. Licensed since 1979, her design and installation work ever since has been driven by a passion for harmonizing human environments with nature. Her philosophy and passion for design was first kindled in 1969, when she and several other undergraduate students embarked on an ocean journey known as World Campus Afloat that took her to Europe, Africa, India, Thailand and Japan. Inspired by Japanese culture, she returned to Japan in 1971 and spent a year studying the gardens of Kyoto and other regions. Upon returning to the United States, she embarked on a career devoted to developing aesthetically and environmentally friendly spaces and founded Foresight Inc. in 1989.