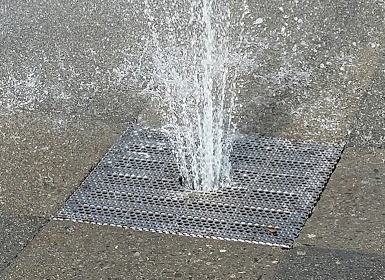 Through all my years of writing these Travelogues, I have discussed less than a handful of traveler-accessible watershapes that didn’t make the grade.  It wasn’t that they were horrible, but rather that they were a little bit “off” in my estimation.

Just recently, however, I saw a fountain that should never have been built – it just wasn’t worth the bother – and it’s the first time in writing more than 100 of these essays that I’m actually advising strongly against visiting the scene of the crime.

The tale starts with my journey by car to the Landscape Industry Show in Ontario, Calif., a couple weeks back.  The event, sponsored by the California Landscape Contractors Association, has been at the convention center there for the past several years.  When I headed back to the parking lot after touring the expo hall, I noticed in the distance the flow from what looked to me like a broken sprinkler head.

I wandered over to see if it was something I should report to the facility’s management.  No, it wasn’t a busted pipe:  It was a deck-level fountain that seemed to be functioning normally – and, I must add, pathetically.  Ouch! 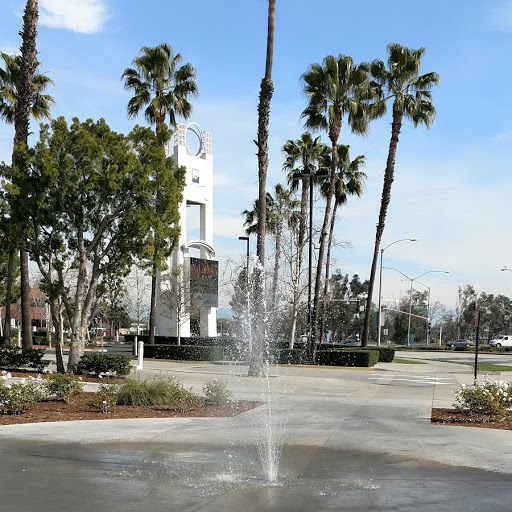 It’s a member of a special (and, thank goodness, thinly populated) class of waterfeatures I file under the heading, “Was this trip worthwhile?”  I reserve this folder for watershapes that are either just plain ugly or simply don’t warrant the attention.  The one in Ontario falls into the latter group – not really ugly, but simply not worth the energy it took to walk into its presence.

In fact, this fountain is among the most dramatically unworthy waterfeatures I’ve ever seen this side of a slimy puddle.  The flow was a bit off vertical, leading me to suspect that at some point the head had been bashed out of alignment by someone else who was even less impressed than I was. 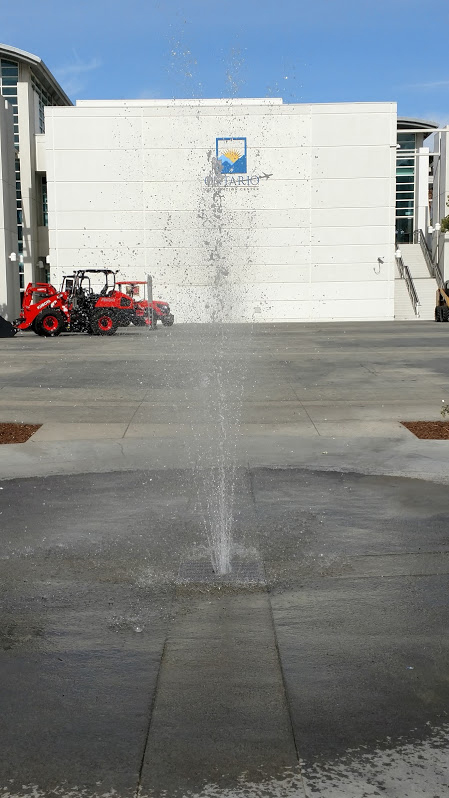 And the anemic flow was far from the sole problem:  I can only think the fountain was an afterthought, given the way it’s positioned so far across the parking lot from the convention center’s main entrance yet not prominent enough to be noteworthy from the big street that passes it by.

True, it can be seen from a certain portion of the big parking lot, but most cars won’t gain real visual access to the fountain’s jet until it’s time to depart through the nearby exit.  It looks as though somebody decided, very late in the game, that a waterfeature was needed and therefore widgeted this thing onto the irrigation system.

All it took was a concrete apron, et voila! – instant landmark!

I’d never noticed the fountain in the several past trips I’d made to the convention center, and maybe that had something to do with the drought and a decision to turn the jets off to conserve water?  But there’s also the possibility it had always been running while I was there – ample testimony to its basic invisibility even to one whose whole body is like a divining rod attuned to the vibrations of flowing water.

Did the convention center need a waterfeature out front?  Yes, I would say so:  Facilities of this kind tend to be fairly dimensionless, and it’s my belief that moving water of a worthy sort would bring depth and maybe lend a bit of drama to the setting.  But this ineffectual dribbling?  It does nobody any good, so steer clear unless you feel compelled to savor its utter lack of spectacle up close.

WaterShapes World (blog)
A surge in pool sales is a beautiful thing, observes Eric Herman. But with this groundswell of popularity, it's more important than ever to educate homeowners -- especially those with young children or grandchildren -- to be mindful of the value of safety and drowning prevention.
Read more
Login
© 2020 WaterShapes. All Rights Reserved. Designed Powered By GrossiWeb