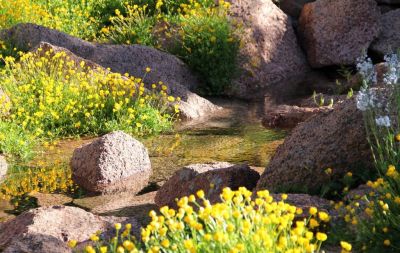 Of all the promotional tools Dave Garton has deployed to support his watershaping business through the years, nothing has been more effective than his business cards. Why so? As as he reports here, it's because there's more to them than the usual bits of contact information.

When I started designing and installing ponds more than 20 years ago, much of my business came from landscape architects, designers and contractors who needed my help with watershaping tasks that were, for them, too much to handle.

It wasn’t always inspired or inspiring work, with most projects requiring me to turn blue smudges on other contractors’ plans into fully functioning ponds capable of supporting plants and fish. It was gritty, volume work, but it gave me the start I needed – and within a few years I was carving out more and more time to devote to projects I picked up on my own, all from referrals I gathered as a result of all those early, basic projects.

About six or seven years into my endeavors, I had gained full access to the best projects in my marketplace and had left almost all sub-contract work behind. It was then I made a stark discovery: Those referrals from the high-volume (but mundane) jobs had been an important source of business for me, and they weren’t there anymore. I needed a new way to keep work coming in and, lucky chap that I am, accidentally found just the right approach when I began the process of ordering up some new business cards.

I had decided it was time to upgrade my cards and thereby my image, but I faced a dilemma: I had lots of photographs of great projects, but I couldn’t settle on a single image that told my entire story in one shot. It was easy enough to narrow things down to a handful of possibilities, but I hit something of a wall.

By this point, I was familiar with a card-printing service called moo.com. They’re based in the United Kingdom, meaning there were logistical issues back in those days with turnaround times and such, but they were known for producing beautiful photo-based business cards and had done great work for me in the past.

One key feature of their system was a willingness to do extremely small card runs, so I asked if I could order tiny quantities of cards with one image and my contact information on one side, but with several different images on the back. Sure, they said. It would cost me a bit more, but they were happy to oblige – and you see the results of one of these runs as illustrations for this article.

I’ve reordered cards from them on a couple of occasions since that pioneering order, and at this point I have an archive with about 30 different cards in my collection. I knew having this variety of images on hand would help me right from the start, but I had no idea just how effective the strategy would be until I began to put them to work.

At first, I would show my prospective clients several of the cards at once, both to give them an idea of the sort of stylistic range I had and also to nudge them toward declaring interest in one or more images that would inform my design process. That worked well – and maybe too well: More than once, these homeowners would grab up all the cards I presented and I found myself being a bit too generous in the process.

That lesson learned, I started withholding cards until after we’d met and I had a certain sense of what they were after. Then I’d present them with a card that very often depicted exactly the sort of pond they wanted. It was a “magic trick” that impressed the daylights out of many of them – and I had found a formula that worked wonders for my business.

I’ve always been a sociable guy and attend lots of local gatherings where exchanging business cards is a common occurrence. When I meet someone new, I’ll pull out a short stack of my own cards to introduce them to what I do.

Sometimes, this person is the one who becomes a prospect. More often, however, it’s someone else within earshot who overhears us talking about ponds and gets curious enough to join in because he or she has an interest in adding a watershape to his or her property. After chatting for a few minutes, I mentally review the selection of cards I have on hand and select what I think will be the best match.

Quite often, this approach has started valuable conversations -- and in some cases, I've clinched projects on the spot.

At this point, my technique with these cards is fairly refined. I’ve always been a good listener and have little trouble visualizing landscapes. I’m also good at extrapolating from limited quantities of information and building a narrative that makes sense for a given audience – a skill I’ve expanded through years of making both formal and informal presentations to professionals, students and homeowners.

So yes, there’s a skill and maybe a little art involved in selecting the right card – and I have to confess that I’ve been off the mark a time or two, but never in a way that discouraged a prospective client. If I’m right, it’s a starting place. If I’m off, it’s still a starting place, but I have more work to do to get things lined up.

I realized that I had made it with my new card system when I found myself giving out fewer and fewer cards because my stream of referrals had become more than I could reasonably handle myself. Success is sweet, but it led me to prepare one last card that I don’t use very often: It’s of the homeliest pond I executed in the early days of my business and is a not-so-subtle way of putting distance between myself and projects I just don’t want to pursue.

As I gradually approach retirement, there just one more card I’ll be adding to my collection at some point – the one that says “This is what I used to do for a living. Gee, it was fun!”

If you’re interested, moo.com is now a global enterprise and the whole process of getting custom cards is much easier than it was when I started down this path many years ago.

Dave Garton, owner of Lawnchair Watershapes in Denver, is an expert pond and stream builder as well as an in-demand business speaker and coach. He may be reached at This email address is being protected from spambots. You need JavaScript enabled to view it..