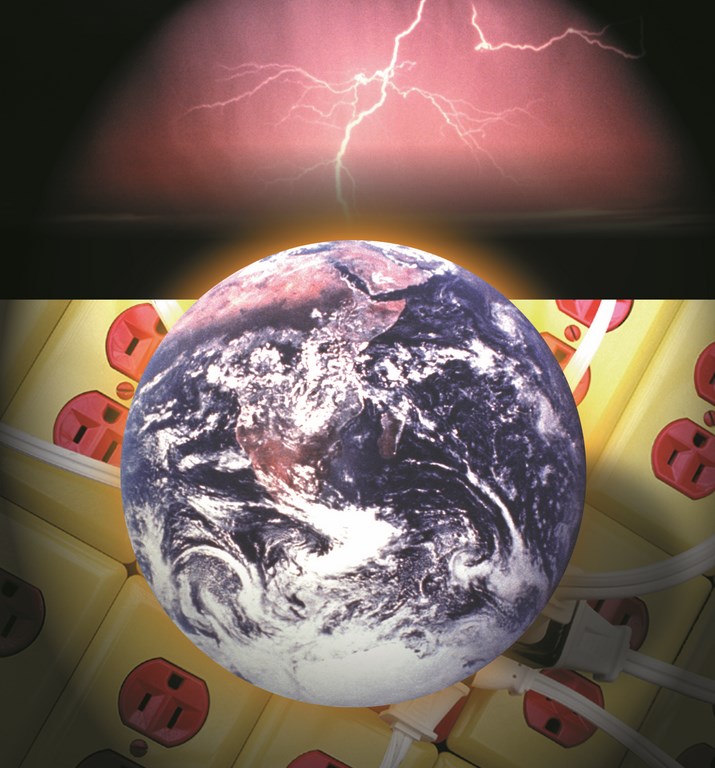 Through the years, the #1 question asked of me at seminars and trade shows has been:  “What’s the difference between bonding and grounding?”

I have wanted to do an answering article far some time, but I was concerned that its length would require it to be split into two pieces and that the every-other-month format of WaterShapes might make it difficult to maintain continuity of thought over a two-month span.

I was pleased when our editor informed me that we would be going monthly for a while.  I figured I’d strike now, while the fingers are nimble and the magazine issues more

I believe the subjects of grounding and bonding can be best approached by first examining the grounding issue – and that a good starting point for this discussion is the “Definitions” section in the National Electrical Code (NEC).

In “Article 100 – Definitions,” we find definitions for the terms ground, grounded and related subjects:

[ ]  Ground.  A conducting connection, whether intentional or accidental, between an electrical circuit or equipment and the earth, or to some conducting body that serves in place of the earth.

[ ]  Grounded.  Connected to earth or to some conducting body that serves in place of the earth.

[ ]  Effectively grounded.  Intentionally connected to earth through a ground connection or connections of sufficiently low impedance and having sufficient current-carrying capacity to prevent the buildup of voltages that may result in undue hazards to connected equipment or to persons.

[ ]  Equipment Grounding Conductor.  The conductor used to connect the non-current-carrying metal parts of equipment, raceways, and other enclosures to the system grounded conductor, the grounding electrode conductor, or both, at the service equipment or at the source of a separately derived system.

The first things that should have jumped off the page and poked you in the eye were those references to “earth.”  In its most simplified form, that’s what grounding is all about:  When we’re dealing with electrical circuits or equipment that must be grounded, we mean that they must be connected to a grounding conductor that can be traced back to the earth or to some conductive object like a metal water pipe buried in the earth or a metal rod driven into the earth.

The definitions for equipment grounding conductor and effectively grounded apply to all of the grounding required around watershapes.  Take the main water-circulation pump, for instance:  Assume it to be a 2-horsepower, 240-volt unit with a wiring run of 75 feet to the service equipment panel.

(The service equipment is the point where the power company makes the connection from their lines to a home’s electrical system. This is where the main circuit breaker will be found, along with all of the branch circuit breakers for the various circuits on the property.  This is also usually the location of the electric meter.  For our example, we are assuming that there are enough empty circuit-breaker spaces to allow installation of the pool-equipment breakers into the existing service equipment panel.)

Metal conduit will be installed between the service panel and the pump, and three No. 12, insulated copper conductors will be pulled into the conduit.  Two of the conductors can be any color other than white, natural gray, green or green with a yellow stripe:  These will be the two “hot” lines supplying the 240 volts.  It would not be unusual to see two black wires used for this, or a black and a red.

The third conductor must be green or green with a yellow stripe:  This is our equipment grounding conductor.

The two hot lines are connected to the Line 1 and Line 2 terminal studs inside of the motor’s wiring compartment.  The green grounding conductor is also routed to the inside of the motor’s wiring compartment where it is connected to a green-colored screw marked “G,” “GR” or “Ground” or marked with the ground symbol (an upside-down T with two lines below it).

An important point:  This grounding terminal is a direct connection to the metal housing of the motor and to all of the internal non-current-carrying metal parts within the motor.  The motor will run the same whether the green grounding wire is connected to this terminal or not.  It just won’t be as safe, as we shall see next month.

The other ends of these three wires run into the service equipment panel, where the Line 1 and Line 2 conductors will be connected to the load terminals of a two-pole circuit breaker in the service panel.

This breaker may then be used as a switch to turn the pump on and off, but its primary purpose is to monitor the amount of electrical energy – that is, the amount of current flow, measured in amperes – flowing in the pump-motor circuit and to turn the electricity off any time the current flow exceeds some predetermined level.

The green grounding conductor connects to the grounding bus inside the service equipment panel. This bus is usually a strip of solid metal equipped with a series of holes and clamping screws.

But let’s dig ourselves out, back up a few feet and return to the inside of the service equipment panel and the grounding bus:  This is the point of grounding for the entire house and the only point in the house where all of the ground conductors come together.  Every green grounding wire is traceable to this point and can be considered to be effectively grounded.

In turn, every appliance, device and circuit having a green grounding conductor traceable to this point can be called grounded.

Next month, we’ll discuss the benefits of grounding and what can go wrong -- and take a look at its close cousin:  bonding.