Established as a wealthy man’s weekend playground, this scenic, seven-acre slice of paradise on the Atlantic side of Islamorada in the Florida Keys is routinely used as the setting for fashion photography, commercials and films because of the archetypal way it expresses the “Keys Lifestyle.”

I was brought on board by Steve Siskind, the architect who designed the house.  (He’s done some spectacular residences through the years, but interestingly, he’s never lived in a house and instead prefers life on his boat.)  This particular home is built in what is known as the Florida Vernacular style, but it boasts a few unusual nautical flourishes including a “lighthouse” that functions as a study from which the homeowner can look out over the garden and enjoy ocean views beyond.

Siskind is one of those architects who designs structures to become part of the setting – a wonderful approach, I think, in scenic places.  So when you walk into the house, the main living areas are to the left and the right:  When you look straight ahead, you’re immediately confronted by a view of the garden and offered an invitation to step out to enjoy it and the water beyond. 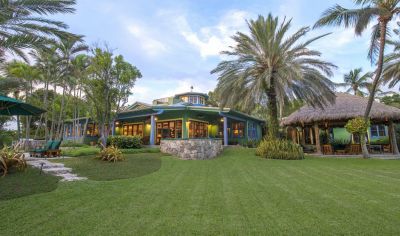 Outside are several palapas fully shaded by palm-frond roofs.  Not only do these provide wonderful opportunities for outdoor living, but they also work with my customary desire to obliterate the distinctions between interior and exterior spaces.  The home itself participates in this process, with dark exterior finishes that make the structure recede into the garden rather than stand out within it.

Taking advantage of this integration, the garden design is all about creating the impression of a tropical paradise that has always been there.  But this easygoing appearance belies the heavy lifting involved in achieving that look.  We had to raise the elevations over much of the property, for instance, so the planting areas could survive the saltwater flooding that inevitably occurs when storm winds blow.

To further the impression of the garden’s long-term presence, we installed dozens of mature, native palms along with a variety of sub-tropical palms, cycads and flowering plants.  Although I tend not to install them, we also set up a lawn so the owner’s young son would have a place to play; at the same time, the property also includes large areas of wetlands and beach that we left completely alone.

The paths are made with Florida Keystone, a fossilized coral material with a rough, well-aged appearance that works beautifully in a beachfront setting.  In this case, the material was waste from excavations for septic tanks – a local, sustainable source as well for the crushed material we used for the driveway and other paths around the property.

All in all, it’s a great place to enjoy tropical beauty, and an even better one for casting a line into the water while hoping the fish won’t bother you.

Raymond Jungles is founder and principal of Raymond Jungles, Inc., a landscape architecture firm based in Miami, Fla.  His prime inspiration and the key to his passion for landscape architecture stems from his longtime relationship with Brazilian artist and environmental designer Roberto Burle Marx, and his current practice is firmly rooted in Florida and the Caribbean basin with a focus on residential, resort and community design.  This November, he will be the keynote speaker for 25th annual conference of the Association of Professional Landscape Designers, to be held in Orlando in conjunction with the International Pool|Spa|Patio Expo.  For details, click here.