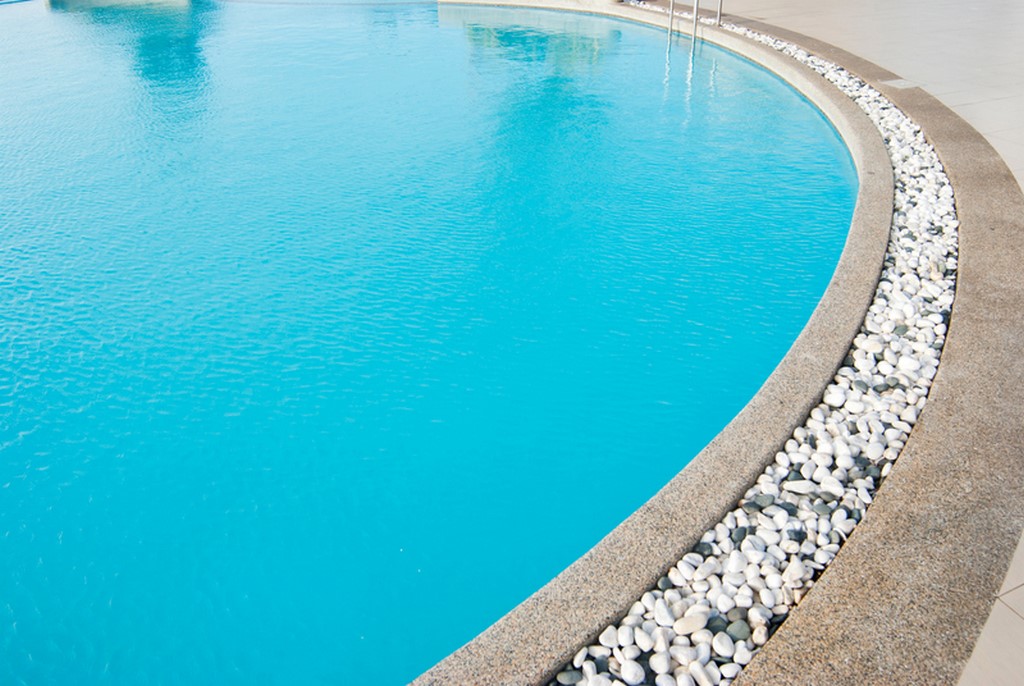 Once a new swimming pool is filled with water and turned over to its owners, the designer and builder have completed their work:  Let’s assume that the results have met or exceeded the clients’ expectations and that everyone is pleased by the outcome.

If all has truly gone well, little will occur in subsequent weeks to change the general sense of satisfaction:  Six months later, the pool will look very much the way it did six months earlier, and a further assumption can be made that, properly maintained, this happy situation will endure through many years of use and enjoyment.

If the pool in question has been finished with plaster, quartz or pebbles, it’s reasonable to say that a large measure of its ongoing aesthetic success (and continuing ability to please its owners) will have to do with the way its interior finish has performed while immersed in water.  Again, if all goes well, nothing will happen to compromise that appearance or anyone’s good mood.

If there are bumps along the way, however, the changing look of a pool’s interior is often the source of complaints.  If its appearance starts to suffer, the phone calls begin and those involved will do what they can to avoid the substantial liability involved once blame is assigned.  In this situation, no participant in the watershaping process is necessarily in the clear.

Through the years, it’s been my observation that how a pool is filled has everything to do with the way its plaster, quartz or pebble finish will ultimately look.  In some cases, no flaws will appear.  In others, however, trouble will crop up sooner or later – and when things go wrong after the start-up, the fur will start flying.  The good news is that almost all of these problems can be avoided if the designer or builder – that is, someone who can specify start-up procedures as part of the construction contract – insists on a pool being started up the right way.

To understand what’s going on here, let’s start by untangling a bit of history and digging into the three common (and significantly different) approaches those who perform chemical start-up services will typically pursue.

This strategy was developed in the early 1970s by Jock Hamilton, a forceful personality who, as a supplier of specialty chemicals to the pool/spa industry, was well positioned to influence how those who used his products performed their work.

The concept he advocated involved making the pool water highly aggressive – acidic enough to dissolve any plaster dust that might form and keep it from attaching itself to a newly finished surface.  (From here on in, I’ll use the term “plaster” to describe these finishes, although it should be understood that quartz and pebble finishes are also included in this discussion.)

In practice, the acid start-up involves adding about eight gallons of muriatic acid for each 20,000 gallons of fresh fill water.  More acid is added as needed for about a week, by which time it will have done its work with the plaster dust and the water will be ready to bring into balance.

Although opinions of the acid start-up are no longer as favorable as they were when Mr. Hamilton was around to support them, some technicians and pool plasterers still advocate and use this approach with dark-colored plaster or quartz with the hope that keeping plaster dust in solution will prevent it from scaling the surface and disrupting color uniformity.

This approach to bringing new pools on line has been common since the 1950s, and it’s quite straightforward:  Once the pool has been filled, the builder or service technician immediately takes steps to bring it into balance and maintain its parameters within the ranges defined by the Association of Pool & Spa Professionals with respect to pH, alkalinity, calcium hardness and other key factors.

This approach has moved in and out of the scene at various times through the past 60 years, but it picked up staunch support about eight years ago, when the National Plasterers Council designated it as the association’s start-up method of choice for plaster pools.

This method has been used for more than 30 years, too, but it was overshadowed by the other two approaches for most of that span and really wasn’t very well known within pool-industry ranks until about ten years ago, when a research group known as onBalance began promoting it.  (Full disclosure:  I am part of the onBalance team.)

The bicarb start-up has two main points:  First, it calls for allowing a newly plastered pool to harden and hydrate for about six hours before the filling process begins.  Second, it requires that the fill water be tested and used only if it has a high alkalinity level (which some tap water contains) or is treated by adding sodium bicarbonate to the water before it enters the pool.  This alkaline bias is maintained in the pool for between two and four weeks, after which the alkalinity is reduced and the pool is gradually brought into balance.

While it doesn’t immediately seem to be the case, there’s common ground among these three approaches in that each of them is in its own way about managing plaster dust – that is, the material that wants to dissolve out of a finish in the days after fill water is added to the pool.

The acid start-up, for example, is intended to keep plaster dust in solution – dissolved, in other words – and does so with great success.  The concern with this technique is that it is not a precision tool and there’s no way to tell how much more of the surface itself is being dissolved right along with the plaster dust.  If the water is too aggressive, it can leave behind a finish that is more porous and less dense than it should be.

The fact is that the plaster initially looks great using this start-up approach – but often not for long.  To one degree or another, the surface is compromised by this aggressive treatment and is therefore more susceptible to discoloration, staining and other damage.  And because this marring typically appears months after filling, the blame is often assigned to whoever happens to be caring for the water when problems arise, whether it is a service technician or the homeowner.

By way of comparison to the acid start-up, the traditional start-up is a model of chemical restraint and can produce positive results.  But it, too, can lead to problems, many having to do with the fact that it involves filling a pool as soon as the plastering operation is complete – that is, before definitive hardening or hydration takes place.  Under these circumstances, even non-aggressive water can encourage plaster dust and also remove surface material.  Again, this can lead to subsequent problems with discoloration and staining.

In addition, the traditional start-up involves no pretreatment of the water:  Only after the pool is filled does the process of bringing the water into balance get started – by which time it may be too late to prevent long-term damage from aggressive/acidic tap or fill water, especially if that water is introduced without allowing the surface any sort of adequate hardening time.

One more point – one often misunderstood:  With new plaster finishes, even balanced tap water can and will dissolve away some material.  This is because 15 to 20 percent of a plaster surface consists of calcium hydroxide, a relatively soluble component of cement.  The only way to keep this from becoming an issue is to fill a newly plastered pool with water having a positive reading on the Langelier Saturation Index (the subject of another of my WaterShapes articles – click here) – implying a need for a raised alkalinity level.

The three factors just called out – that is, immediate filling, late balancing, no fill-water pretreatment – explain why plaster dust is such a large issue in plaster pools started up using the acid and traditional methods.  Problems here lead to frustration among builders, plasterers, and service technicians who depend on the sustained good appearance of pools’ interior surfaces for their reputations and livelihoods.

Happily, the third of our contemporary start-up procedures – the bicarb start-up – avoids the key problems associated with the acid and traditional approaches.  As we’ll see in the next article in this series (click here), this third method, used properly, creates a more encouraging environment for the long-term health of plaster, quartz and pebble finishes.