On Grounding and Bonding

As I mentioned in an article in the last edition of this newsletter (November 3, 2010), many people misunderstand the relationship between electrical grounding and electrical bonding. Let’s pick up the discussion where we left off. 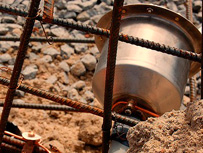 Although grounding and bonding are closely related, they do serve separate purposes — both of which work together to increase electrical safety.

It bears mentioning up front that verbally describing grounding and bonding and their relative differences and interrelatedness is often the source of confusion. Fortunately, you can avoid that difficulty by being practical and following the requirements defined in the National Electric Code.

For purposes of this discussion, however, it helps to know that, on the most basic conceptual level, both grounding and bonding need to be considered as critical because electricity always seeks the best path to ground (or earth). Grounding as described in my previous piece can be defined as a means of making certain that electricity brought in through an electrical service panel will follow a controlled path through a circuit and then to an established grounding location.

That objective is supported by bonding wiring, which ensures that all metal components associated with a body of water exist on the same “electrical potential,” meaning the pool’s metal components and its equipment do not inadvertently provide a path of least resistance to ground.

Through no fault of the swimming pool, the hundreds of yards of damp steel in the shell often present the electricity with a better ground than is provided by the home’s copper grounding rod or by reinforcing steel in a building’s foundation (which is called an Ufford ground).

When and if this flow occurs, the damp steel within a watershape shell may offer the best path to earth. In a properly bonded swimming pool, in which all metal components are tied together with a wire that goes back to the electrical panel and from there to ground, the pool and all its metal components exist on the same electrical potential and therefore do not provide a path of least resistance to ground, meaning among other things there is no risk of electrocution.

Where the bonding grid is lacking, inadequate or becomes disconnected from the grounding system, however, there can be a significant risk of electrocution.

Let’s assume that the grounding rod adjacent to the service entrance panel stands in extremely dry soil, or that its connecting clamp has come loose or become corroded. If any of that is the case, the amount of electricity to be discharged into the earth via a pool’s steel grid may be significant — perhaps even deadly.

Given the possible range of conditions, let’s look at a set of simple scenarios.

>> A swimmer exits a properly bonded swimming pool via the stairs. He or she grabs the bonded metal railing in stepping from the pool, and at one moment has one foot in the pool and the other on a wet concrete pool deck. Although the pool and railing may be energized, the swimmer feels nothing at all because the pool, deck and railing all have the same potential ground. This simply means that all of the metal components are offering the electricity an equal path of resistance to the earth.

>> That same swimmer exits a pool where the metal handrail had been installed after the pool was built — without any bonding protection and without any contact to the reinforcing grid in either the pool or the deck. As the swimmer exits the water, he or she places a hand on the railing, has one foot on the deck and has the other in the pool (or maybe even both feet on the deck). The swimmer is wet and offers the electricity a path to ground that has less resistance than the metal railing, so the electricity flows through the swimmer.

>> A pool service technician walks up to a leaking pump on the same pool. Previously, he or she had cut the bonding wire to repair the motor. In touching the metal case, a fatal shock occurs as his or her wet feet present the electricity with a path of less resistance to earth.

Technically, the service professional became the final path of discharge. Just as the swimmer getting out of the pool using a non-bonded railing was electrocuted, just as the worker using the circular saw in my previous article was shocked to death, the technician effectively became the terminal path to ground and suffered a fatal injury.

Again, the principle behind bonding is to equalize the path to ground for the electricity.

This is why bonding is so important. Section 680 of the National Electric Code outlines standards for bonding and grounding swimming pools. The following is not an all-inclusive list, but it covers the most common items requiring bonding:

Furthermore, the bonding conductor between a light’s junction box and the interior of the lighting niche may not be spliced. These internal bonding wires may only be interrupted within an approved enclosure and upon a grounding/bonding bar. In addition, bonding conductors may be either stranded/insulated or solid copper (minimum #8 size) — and redundancy isn’t a bad idea. In Canada, in fact, two bonding wires are required between the pool and the equipment pad.

If you follow these simple requirements, you’ll go a long way toward ensuring that people who come into contact with watershape fixtures and equipment will not become the path of least resistance. It’s the right thing to do, and it’s relatively easy to accomplish if you manage your construction operations well.

Paolo Benedetti, founder of Aquatic Technology Pool & Spa in Morgan Hill, Calif., is an internationally renowned pool designer and builder, as well as a longtime contributor to WaterShapes magazine. For more information, go to www.aquatictechnology.com.