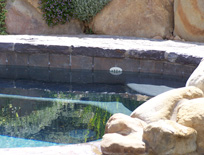 Automation of some kind is standard with most swimming pool projects these days. Almost every project my company does, for instance, now includes an Aqualink system from Jandy (Vista, Calif.) or something similar.

These systems feature a panel in the equipment area that controls motorized valves; a remote-control unit mounted inside the house (nowadays with fancy touch-screen displays); and, in most cases, a spa-side switch.

These spa-side units typically offer either four or eight functions and are most often installed within easy reach of any bather. The idea is that, while you’re comfortably seated in the spa, you can reach over and turn on the light, alter the jet arrays, raise the temperature or shut the whole system down — among other possibilities.

The installation manuals for these spa-side units spell out where these panels should be installed, whether inside the spa near and above the waterline or on the deck within arm’s reach of the spa. The manuals make it very clear that manufacturers don’t want the panels installed at or below the waterline. Even though these units are designated as waterproof and getting soaked is not a problem, their suppliers generally want them to stay reasonably high and dry.

These units are typically connected to a threaded PVC pipe through which the wires pass back to the main panel at the equipment pad. This back connection should be sealed with silicon sealing compound — all very simple and straightforward.

The Scenario: I was called onto a project as a representative of California’s Contractors State License Board to inspect a situation where the pool was leaking every time the spa was activated. The raised spa was located about two feet above the pool’s surface and about the same two to three feet above the equipment pad.

When the spa was turned on, the water level in the vessel would rise slightly, partially covering a spa-side control panel mounted at the tile line. At the same time, the water level in the pool would drop. We quickly discovered that water was flowing into the conduit line and then flooding the bottom of the electrical panel — never a good idea.

The problem was simply that whoever installed the spa’s controller forgot to seal the connection to the PVC pipe. This potentially dangerous situation could easily have been avoided with just a few drops of silicone sealant.

The Fix: It’s pretty simple — just properly seal the conduit, both at the spa-side remote and at the electrical box (as a redundant measure). Also, I recommend installing the remote away from the waterline, whether it’s nearby in the deck or in an adjacent structure, such as artificial rock or some kind of step, wall or pilaster. If you do have to install the unit in the tile line, do all you can to make sure it’s at a level that’s never directly in prolonged contact with the water.

Always inspect and insist on seeing what you expect to see, making no assumptions that everything’s been installed correctly.