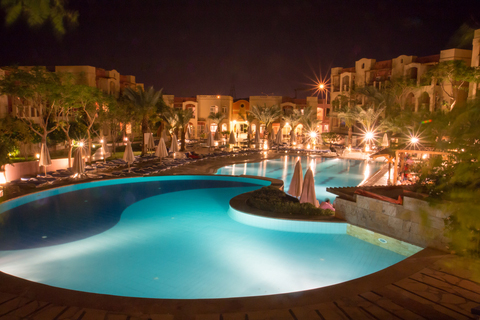 It’s a fact:  Those who own and operate commercial aquatic facilities spend a lot of time trying to find ways to keep costs under control.  From elaborate hotel pools to huge waterparks, it’s all about finding money to reinvest in new programs and features – or a simple matter of keeping the doors open.

In a recent article, I wrote about how the increasing use of variable-frequency drives with pump motors is resulting in savings that ripple throughout these facilities, sometimes in unexpected ways (click here).  This time, I’ll discuss another technology that’s having almost as great an effect – that is, the widespread deployment of LED lighting – and look at how the savings found here are being compounded through the long service lives of these devices.

As is the case with variable-frequency drives, there’s an up-front investment in acquiring LED lights and installing them in place of conventional incandescent lamps.  But in both instances, the benefits start to accumulate almost immediately – right alongside the savings.

Light-emitting diodes have been around for many years, but the early versions of the technology had two problems:  They were oversold, and they underperformed.  If you go back just a dozen years, it was tough to find a watershaper or lighting designer who would enthusiastically endorse the technology:  The LEDs produced bright, intense point sources, but they didn’t cast much light in any direction:  They lit themselves and not much more.

That situation has changed substantially in the past ten years:  Suppliers have successfully worked out the kinks, and now these small semiconductor devices convert electrical energy directly into light that can match incandescents in performance at a considerable savings in energy consumption.

In addition, these compact light sources are easily combined with microprocessor intelligence that allow users to control illumination to a remarkable degree.  The result is crisp, amazingly bright light that completely saturates a space.

Much of the savings with LEDs extend from the long lifespans of these devices – generally ten to fifteen times that of traditional incandescent lamps (more on this below).  But first and foremost, there’s reduced energy consumption courtesy of the fact that LEDs create their light without reaching the high temperatures associated with conventional bulbs.

These lower operating temperatures are a key factor in the extreme energy efficiency of LEDs.  In fact, 80 percent of the electrical energy applied to an LED circuit is converted into light energy, with only 20 percent lost as heat energy.  Incandescent bulbs flip those figures, operating at 20 percent efficiency and dumping 80 percent as wasted heat.  So even though incandescent lights are initially cheap, LED lights substantially reduce energy costs – and the list of benefits flows on from there.

Let’s get specific:  Today’s white LED lights use between 40 and 55 watts to produce the equivalent of 300-, 400- or 500-watt incandescent bulbs.  This means that they require much less energy than comparable incandescent lamps.  Moreover, because each LED light lasts so much longer and the bulbs need changing less frequently, the savings start adding up in a remarkably short time.

To give this some context, consider the fact that the amount of power a bulb uses to provide a certain amount of light output (or lumens) is calculated in watts.  The incandescent light bulbs used in aquatic facilities are typically in the 300-, 400- and 500-watt range – that’s what it takes to illuminate a large area of pool water at night.

Using an Olympic-size natatorium as an example, let’s say there are 40 lights used to illuminate the pool’s interior at night – not an uncommon count.  That wattage adds up quickly with so many lamps, and with 300-watt incandescents, that’s a total of 12,000 watts; with LEDs, by contrast, those 40 lights, at 40 watts per light, draw just 1,600 watts for the equivalent amount of illumination.  So with our 40-light pool, replacing incandescent lamps with LEDs offers up a savings of roughly 85 percent – and that’s just in terms of raw energy.

Assuming an energy cost of $0.15 per kilowatt hour and daily illumination for eight hours, the annual energy savings in this 40-light competitive pool would be approximately $4,415.00 if all 40 lights were switched over to LEDs.  That’s pretty remarkable.

It’s often argued that the savings with LEDs are erased by the initial cost of these lights.  Where a typical 300-watt incandescent bulb costs about $45, the average 40-watt LED kit costs about $225 -- approximately five times as much.  But even so, the return on investment with LEDs is swift:  With each one saving an average of $110 per year, each LED pays for itself in less than two years – and those gross savings are multiplied for every LED installed in the pool.

At the start of this article, I suggested that there were benefits associated with LED lighting that went beyond the savings in energy costs.  These have mostly to do with maintenance and the ongoing expense involved in physically accessing lighting fixtures and replacing their bulbs.

If a facility uses incandescent lights for eight hours a day, 365 days a year, each bulb will need to be replaced at some point during the year, as these bulbs have service lives of approximately 2,000 hours.  That would be fine if the bulbs each had exactly the same service life and burned out at the same time, but that’s never the case.  In fact, one or maybe two lights will go bad at a time, creating dark spots in the pool that are both unsightly and unsafe.

LEDs last ten to fifteen times as long as incandescent bulbs, so these service cycles – and the labor involved in light replacement – are spread out across a few years rather than several months.

Adding to the savings is the fact that it’s typically easier to replace an LED light than it is an incandescent one.  This is so because the much-higher operating temperature of incandescents often has a damaging effect on a lighting fixture’s gasket, making it harder to remove and replace.  With LEDs and their lower operating temperatures, the silicone gaskets used in some models become damaged and need replacement far less often – a savings in both parts and labor.

Thus, a process with incandescent lamps that can take a half hour and sometimes involves draining the pool down below fixture level (if the cord is too short to bring the light to the deck) takes just minutes with LED lights – no draining required.  And these tasks can generally be handled by the facility’s staff, saving additionally on the costs often involved with bringing in professional service technicians to deal with more elaborate replacement tasks.

There’s one point I haven’t mentioned so far, and that’s the quality of the light cast by LEDs relative to incandescent lamps.  Today’s LEDs produce light with a high color temperature when compared to standard bulbs, and their “bluer” light penetrates the water better, yielding higher brightness readings.

And there’s a difference that doesn’t show up on light meters:  The human eye is dark-adapted and perceives light with a higher color temperature as being brighter and more desirable in aquatic environments.  The sense this offers is that the water is clearer and easier to see through – and that an indoor space in particular is brighter and more inviting as well.

It’s another case where a new technology has come of age and is ready for owners and operators to put to use in improving their aquatic facilities.  And it can’t hurt that they’ll save a great deal of working capital in the process!

Mike Fowler is the commercial marketing and sales manager for Pentair Aquatic Systems in Sanford, N.C. He has been with Pentair since 1992, starting his career in the technical services department at Purex Pool Products. Fowler has held many managerial roles within the company, including marketing, accounting and products. He can be reached via e-mail at This email address is being protected from spambots. You need JavaScript enabled to view it..