It’s not often that a watershaper tackles a job that takes more than two years of complete, full-time effort, but that’s been the case for the project pictured here.  For nearly two and a half years, in fact, I devoted virtually all of my working life to this single backyard watershape environment, and as I’ve mentioned in previous articles, there were times when I wondered if I was crazy to get involved with a project of this scope.

Indeed, to describe it simply as a “backyard watershape environment” is to fall miles short of conveying the complexity of the systems covered in two previous WaterShapes articles (“When Dreams Grow,” April 2008, click here; and “Layering the Experience,” July 2008, click here):  It was a monster project, and there were times I thought the beast had me at a distinct disadvantage.

You know all about that, of course, if you’ve followed this sequence of articles, so I won’t belabor the point.  Here, we’ll wrap things up by letting the photographs tell most of the story – although I must say the images don’t quite capture the full extent of a project that, to me, represents almost 30 months’ worth of blood, sweat and tears.

BACK TO THE SOURCE

Let’s reset the scene, very briefly:  The clients had a large backyard and wanted a place for their three children to play that would also serve as a venue for parties accommodating more than 100 guests at a time in luxurious splendor.

It bears mentioning that the project shown here isn’t quite complete:  Once we finished the watershape elements, we were to move on to develop a number of landscape and hardscape features and outbuildings.  Unfortunately, the owner suspended work before all of these features were completed.  We’re hoping to be back on site to complete our work sometime in the year to come.

The watershapes, however, are fully up and running:  Just as the clients hoped, the water now serves as a venue for both family fun and gala social events; just as I hoped, all the details we visualized and debated have come to fruition.  Although there might be a thing or three I’d alter if I could, for the most part the details are even more beautiful than I had imagined. 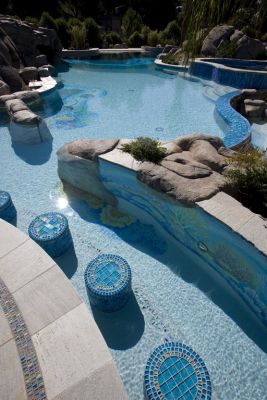 Among the highlights are the fusion of custom shapes of jewel-like glass tile and hand-painted ceramic tile murals provided, respectively, by Lightstreams Glass Tile (Mountain View, Calif.) and Craig Bragdy Design (Denbigh, Wales).  Normally, the use of either of their products alone would be a project’s defining design element, but in this case Lightstreams’ David Knox and Craig Bragdy’s Nick Powell collaborated  to interweave both materials – with truly spectacular results.

Another highlight is the multi-colored exposed-aggregate finish we designed in close collaboration with supplier Pebble Technology (Scottsdale, Ariz.) and plaster subcontractor Gardner Pool Plastering (El Cajon, Calif.).  Not only does this material embrace all of the tile and stone details, but it does so in five different colors of Pebble Tec and Pebble Sheen – one of them a custom blend made just for this project.

The finish colors included the Tahoe Blue Pebble Tec we used inside the grotto to complement the rustic feel of the space as well as the Desert Gold Pebble Sheen placed all the way to the pool floor on the walls where the faux rockwork seems to penetrate the bond beam – thus making the rocks appear to be the tips of massive submerged boulders.

Accommodating the client’s desire that the swim-up bar and the pool’s shallow areas should look like white sand that the deep end should be a deep blue color, we developed the custom color mentioned above to ease what would have been an abrupt visual distraction at the break from shallow to deep water.  This transitional Pebble Sheen color was also used on most of the walls in the swim-up bar and shallow-end areas to provide a smooth transition from the aqua and turquoise colors of the waterline’s glass tile and to conjure an undulating, sand-dune effect where the walls meet the much lighter floor. 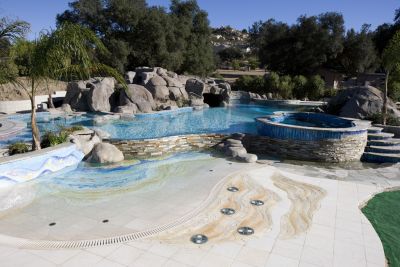 Installing these different colors proved a real challenge:  Gardner’s crews would place a color in one area and then I would step in and score the finish to create the exact contours and patterns I wanted.  They’d remove the material beyond my score marks and then add the next color, creating crisp lines where the colors changed.  (Given the fact that these finishes had to stand up visually alongside the vivid tile details, I also asked Gardner to add crushed seashells to the mix to lend a subtle sparkle throughout.)

This sort of attention to detail was emblematic of everything that happened with this project.  From the excavation in the rocky soil and the complex structural details of the shell to the complex plumbing runs, extensive artificial rockwork and multiple programmable waterfeatures, everything was as custom as custom could be, and it all required a level of teamwork and creative problem-solving at levels I’ve never witnessed before.

To say that everything went smoothly would be an exaggeration.  There were tense moments within the project team and more than a few uncomfortable moments with the clients.  Through it all, however, everyone involved – including equipment suppliers, consultants, contractors and subcontractors – stepped up, stayed focused and did what they had to do to see the process through to the finish.

As I look back on this project and its seemingly infinite list of trials and tribulations, I’m extremely proud of what we all accomplished together.  The fact that the clients are happy with it is certainly the most rewarding aspect of the work, but I’m also grateful that I had the opportunity to stretch my capabilities to the absolute limit.

Right about now, of course, I could also use about six weeks in Hawaii.

Kathy Marosz is founder and principal designer for Vision Design & Watershapes, a landscape and watershape design/construction firm based San Diego, Calif.  She established the firm in 2006 as a reorganized offshoot of her previous company, Enviroscapes, which she had established in 1997.  Marosz has specialized in residential landscape design and construction since 1989, the year she earned her degree in landscape architecture from California State Polytechnic University at San Luis Obispo.  She was the first woman to qualify for membership in Genesis 3’s Society of Watershape Designers and teaches classes in site analysis and architectural drafting for Genesis 3’s design schools.  Before entering the landscape and watershaping industries, she was a professional musician and recording engineer.