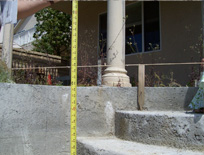 In the very early stages of a project, it isn’t unusual for the plot plans used for design concept/presentation purposes to be a bit off scale, sometimes by a fair amount. Many properties are difficult to map, and even in those cases where it might seem relatively simple to get things right, the fact that one person generally does the job alone isn’t an invitation to great precision.

Yes, you need to be reasonably careful in noting structural setbacks. But exact indication of, say, the contours of a freeform pool? That’s just not required at this still-speculative point of the design process.

Once you’ve signed the contracts and the project is moving forward, “working drawings” need to be created and greater care should be taken. Even here, however, the process is still relatively loose, because ultimately the pool and other hardscape features will be laid out on site in a process that often involves making minor adjustments. These changes — in response to sight lines and myriad other issues — are so common that I won’t even bother to argue about what is and is not acceptable when it comes to tolerances.

My point here is, when things change more than a little bit, the homeowner needs to be involved. Artistic license is not permission to run wild!

Scenario: This lesson resulted from a project I was asked to investigate on behalf of California’s Contractors State License Board. The pool builder had drawn up a site plan that was off by about three feet, resulting in incorrect measurements for the locations of the patio posts and, in turn, interference in the layout of the swimming pool.

In this case, the pool had a freeform design and was to be long enough for lap swimming. It also included some decorative waterfeatures on the side away from the house. When the contractor went to set the shape of the pool in preparation for construction, he discovered that the already-installed patio posts were inside the boundaries of the pool. Naturally, he shifted the pool’s layout — but he did not secure approval from the homeowner to do so and also failed to modify the pool shell’s design or construction to accommodate the surcharge imposed by the too-close posts.

It’s not uncommon for a pool’s shape to be slightly altered on site. Occasionally, this will happen when you look at things from a certain focal point and recognize that the project would look better if the pool’s shape or dimensions were altered to some degree. I think a little “designing on the fly” is perfectly acceptable, because things do look different in the real world than they do on paper. So long as the designer is working with the homeowner on site and there’s agreement about the adjustments, there’s generally no problem with modifications of this sort.

In this case, however, the pool was altered so much that the waterfeatures had to be substantially changed and the entire shape of the pool modified. The homeowner rightfully complained that she was not receiving what she had agreed to buy — a problem that was resoundingly aggravated by the fact that the contractor had made no adjustment to costs.

That was quite a blunder, but it wasn’t the only one he made: The original plan called for three and a half feet of depth to allow for a full underwater turn in lap swimming. When the pool shell was built, however, the finish depth was a foot shallower. The homeowner recognized the problem and complained, so the contractor sent out a crew to start jackhammering the pool.

The homeowner was reasonably well-informed and knew the structure had to be approved by an inspector who needed to be on site to verify (among other things) proper coverage of the structural steel. When this didn’t happen, she called the city planning department — which sent out an official who shut down the project.

Had the contractor done things right, he would have gone back to the structural engineer for redesigned plans. In addition, he would have pursued all the subsequent steps of having the pool re-excavated and reinstalled, with a deputy inspector signing off on the new portion of the shell as it was being shot. And because it was the builder’s errors that had set all of this in motion, the work would all have been done at his expense.

As it turned out, the builder ended up on the short end of the stick because he had failed to communicate with the client about what was happening and seemed for all the world to be trying to pull a fast one.

Lesson Learned: First, you should have the homeowner sign off on the original site plan. More important still, when you lay out the pool in the field — no matter whether you do it with spray paint, a rope laid on the ground or a tracing in the dirt — have the homeowner sign off on that final plan, making note of any variation from the original site plan. And this is a great time to reconfirm pool depths, steps and benches as well as the exact locations of associated structures.

It’s really as simple as that: Make sure homeowners sign off on designs that are actually going to be built, and avoid springing major changes on them midstream. Remember, the devil’s in the details, especially any that aren’t clear in clients’ minds. So take the time up front to measure properties with reasonable accuracy: It is both more difficult and more costly to make changes later because someone was off by a foot or two in the field.