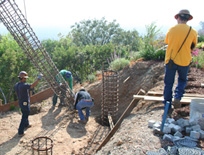 Through the past several years, I've witnessed a debate among people in the watershaping industry about whether every construction project should require soils and geology reports as part of every design and engineering process.

Most of my colleagues who work in the custom, quality-oriented end of the business will categorically state that these reports are utterly essential, no exceptions, while others who don't typically operate at that level say it's an unnecessary bother and expense.  The fact that the industry approaches this issue in two entirely different ways leads to trouble, basically because a designer or builder who is willing to work without soils and geology reports will provide bids based upon structures that meet minimum specifications.

In other words, he or she has no documentation indicating that the structures need to be any stronger than the minimums allow to withstand the forces imposed on them by the surrounding earth. As a result, these structures often do not meet even the minimum requirements of the site.

Simply stated, without soils reports there's no way to ensure that you're even meeting minimum standards.  As I see it, that's taking the easy way out and makes watershape design and construction a crapshoot — definitely not a good thing. It also makes for an uneven playing surface: In California, for example, geotechnical investigations start at around $4,000. When volume builders compete on price, they'll leave out that item and keep their bids artificially low.

In an information-free/no-reports zone, volume salespeople and builders are additionally able to work with generic plans and details purchased in volume from production-mill engineering firms. They can use these non-site-specific documents to slide through municipal review in many cases.  But truth be told, these plans are valid only if the engineering indicated in the plans and details meets or exceeds the structural requirements called for by a site's soil conditions — and there's absolutely no way of knowing if that's true without a soils or geology report.

In my view, there's no debate: You can either do the right thing and order the reports — or you can fly by the seat of your pants without reports and hope for the best.

There's another layer to this reports issue, one that rarely gets examined and taken into full account: Essentially, it's the structural engineer's responsibility to review the soils and geology reports to determine the required plan details.  That is to say, it's not the designer's or the contractor's or the salesperson's job to define the strength of the structure. Only those with engineering degrees and certifications or who have structural engineers on staff can make these decisions. Even fully qualified professionals can truly perform that function only with soils and geology reports in hand.

Obviously, "standard library engineering" is a cost-effective and even an accepted means of designing structures, and I see no fundamental problem with these designs beyond the fact that they represent leaps of faith I'm unwilling to take. After all, in a logical (and probably a legal) sense, use of these documents on a job is valid only if their selection is based upon a structural engineer's review of the soil and site conditions!  Some municipal planning and building departments are wising up on this point, and many are now requiring geotechnical reviews of proposed sites, as well as reviews of the structural engineering, to determine a design's adequacy given prevailing site conditions.

Here's the bottom line: Where I work, California code requires that any structure needing structural engineering must be designed to meet the anticipated load conditions. This includes constant and predictable static loads, such as adjacent buildings/foundations, slopes (up or down), retaining walls or planters. It also covers the site's soil conditions (dry or saturated), drainage characteristics, "clearances to daylight" on sloping lots and more.

There are variable dynamic loads, which result from any of a number of unpredictable forces, including expansive soils, hydraulic/water-table pressures, snow or freeze conditions, seismic events, tidal action, wind pressure, avalanches or mudslides. These conditions simply cannot be anticipated (or engineered around) without a structural engineer having a complete overview of site conditions as well as complete geotechnical reports.

Personally, I think that closes the door on the debate.

When building departments start paying attention to site conditions, it often results in their requiring inspections of open excavations to verify that the soil conditions are no worse than those anticipated by the preliminary geotechnical investigations (although in some cases municipalities are only requiring these reports in defined "geo-hazard zones").  This open-pit inspection is important because the initial testing usually involves borings or test trenches that sample only small areas on given properties. Often, the test trenches or borings will just miss (and therefore fail to identify) obstructions, large rocks, pockets of incompetent material or other deficient conditions.

If problems are uncovered, it often means stopping the project while the experts come in for another look — and sometimes entails significant delays as the geotechnical and structural engineers regroup and redesign various project elements.  When these issues arise, designers, builders and engineers are not responsible for costs or time involved in dealing with these unforeseen obstacles. After all, it is the property owner's land, and if buried treasure had been unearthed instead of a huge boulder, he or she would surely jump into the pit to lay claim to the hidden gold bullion. It a simple matter of justice: He or she owns the defects as well as the bounties!

Paolo Benedetti, founder of Aquatic Technology Pool & Spa in Morgan Hill, Calif., is an internationally renowned pool designer and builder, as well as a longtime contributor to WaterShapes magazine.