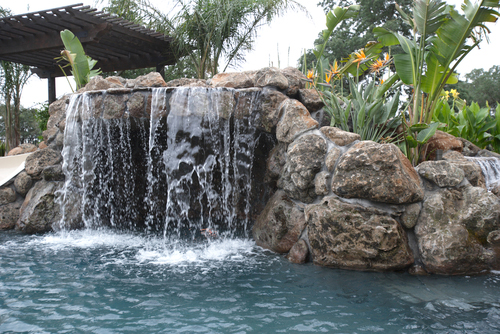 When agitated or flowing water moves through the air, it loses carbon dioxide.  That's particularly significant in systems with fountain jets, waterfalls or vanishing edges, observes Kim Skinner, with the loss affecting pH in ways that must be dealt with to avoid big problems.

A good portion of the swimming pools being built these days include something extra – maybe a waterfall or some fountain jets, for example, or perhaps a perimeter-overflow system or a vanishing edge.

All of these active, water-in-motion systems add tremendous visual interest to common pool profiles, not to mention a welcome level of mood-enhancing sound.  And so many designers and builders have mastered the skills it takes to carry off these attractive looks in a technical sense that there’s no reason just about every project shouldn’t include one or more of them.

It’s been my pleasure to witness the evolving complexity of watershapes through what’s now a long career.  But there’s a seldom-raised issue to be accommodated in designing and building these enhanced pool systems – one that can seriously influence the watershape’s long-term appearance and the homeowner’s satisfaction with it.

It’s all about considering what happens once these full-featured pools are filled with water.

Pools set up with vigorous moving-water systems of the types mentioned above have long been known (at least among service professionals) to present a special maintenance challenge – that is, someone (or something) has to deal with the fact that the water is more difficult to keep in balance.  And that’s particularly true when it comes to maintaining pH within the desired range from 7.2 to 8.2.

In most pools of any configuration, of course, pH has a tendency to rise after the water has been balanced initially, moving up from 7.2 or 7.5 to a level of 8.2 or above – and this cycling affects vinyl-liner and fiberglass pools as well as those with cementitious finishes, including quartz, pebble and plaster pools.

Once the pH drifts beyond 8.2, the pool water is more chemically scale-forming than it should be, and there’s a far greater likelihood that calcium scale will form on all pool surfaces and within the equipment. 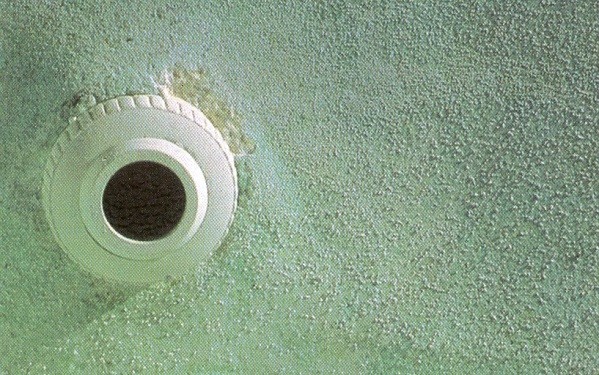 The scaling of pool finishes can be particularly troublesome.  The surfaces can become uniformly marred by abrasive or even sharp “outcroppings” that can scratch the skin and even cause bleeding when rubbed against or walked on.  In addition, when left untreated these areas originally afflicted by white scale will turn gray and brown as they are tainted by dirt and minerals in the water.

Such unsightly discolorations are never popular among pool owners; before long, their appearance is likely to result in upset calls to the service technician or to the builder.

The point here is that the water-in-motion features now so popular with swimming pools have a tendency to aerate and expose water to the atmosphere, effectively increasing the speed at which pH rises.  It’s all about basic water chemistry:  The agitated, exposed water loses carbon dioxide (CO2) at a far more rapid clip than is experienced in a traditional, still-water pool.  And when pool water loses carbon dioxide, the pH rises.

This change to the pH level in full-featured pools can happen quite quickly.  In some cases, we’ve observed rises from pH 7.5 to 8.2 in a span of just 24 to 48 hours, and we know that the change can be even more rapid in the very active, highly agitated systems – in fewer than 24 hours, in fact, depending on the type and extent of the waterfeatures.

If allowed to proceed freely, this process of pH rise can lead to unfortunate consequences related to surface appearance and equipment performance.  Fortunately, however, the situation is also rather easily corrected by a designer or builder who is aware of how water-in-motion features affect water chemistry and includes the equipment required to keep pH within the proper range in the pool’s plans and specifications.

The key is constant monitoring along with the frequent chemical adjustments needed to control pH rise and prevent calcium scaling.  Handled manually, this can be cumbersome, costly and labor-intensive.  But if an automated management system is part of the overall pool package from the start, the relatively minor cost becomes just another part of the overall expense of including and enjoying such a desirable waterfeature.

One approach to pH control that is already available and popular is a measuring unit coupled with an automated acid feeder.  When the pH rises during the normal course of operating a moving-water system, the controller sends a signal to the feeder to add a measured dose of acid to lower the pH.  These systems work well, but as we’ll see below, there’s one key detail to be considered. 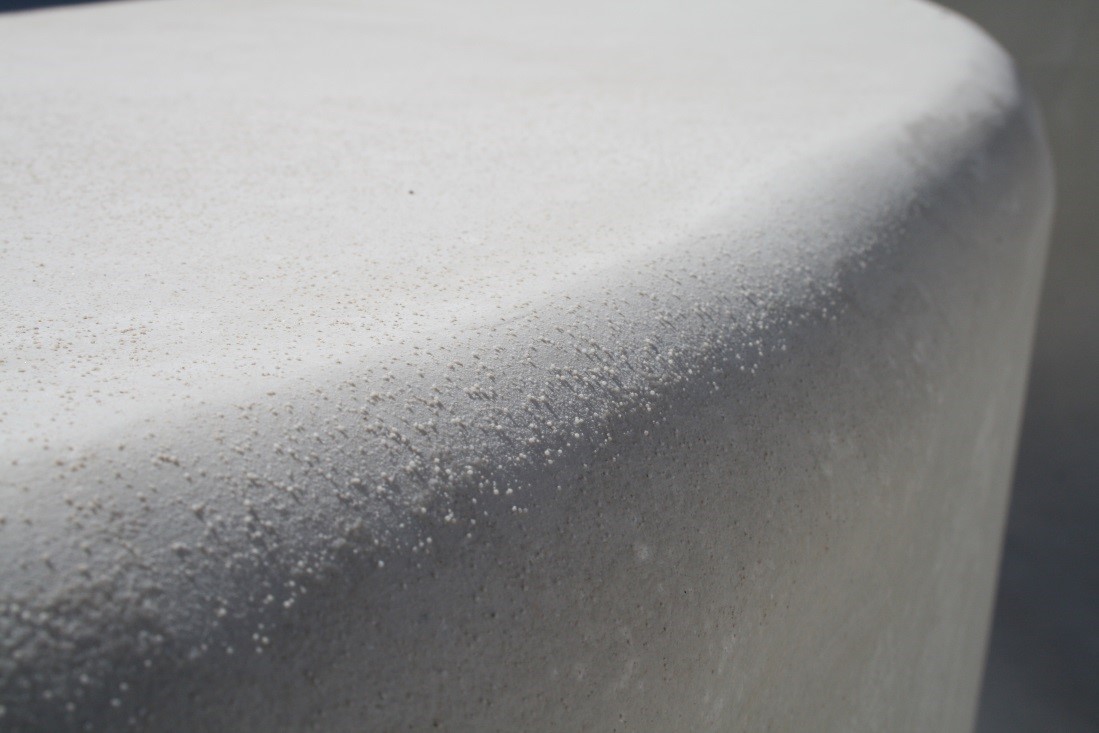 Another solution requires installation of a CO2 injection system along with a pH monitor.  These units slowly inject carbon dioxide directly into the water stream, thereby replacing carbon dioxide lost in operation of any waterfeatures and sustaining its level in the overall pool of water.  The advantage is that this lowers the pH while leaving the water’s alkalinity completely alone.

As suggested above, this distinction is meaningful:  By adding acid, pH is lowered (which is great) – but so is the alkalinity.  Eventually (and often), this depleted alkalinity must be increased with doses of sodium bicarbonate to keep its level from dropping too low and thereby making it likely that the pH level will plunge below 7.0 when acid is routinely added.  That’s a level at which the water becomes highly aggressive and will negatively affect pool equipment and pool finishes alike, especially plaster.

By contrast, CO2 injection causes no decrease in alkalinity:  Only the pH is lowered.

But as is frequently the case with water chemistry, there are other factors to be considered – including, for instance, the type of sanitizer used to treat the water and the effect it has on alkalinity.  Trichlor, for example, is quite acidic and will lower alkalinity on its own.  The opposite is true with bleach and calcium hypochlorite, both of which are alkaline and will raise alkalinity.  The tap water used in replacing evaporative losses in these moving-water systems is another variable that can affect alkalinity.

Carbon dioxide is completely neutral with respect to alkalinity, so if that level changes, there’s another factor causing it to rise or fall.

So why pursue this costly, labor-intensive cycle of adding large doses of acid (to accommodate pH rise) followed by offsetting doses of sodium bicarbonate (to maintain the alkalinity at its proper level)?  A better path involves injecting carbon dioxide to lower the pH:  It has no effect on alkalinity and therefore will not encourage the fluctuations that result from alternating doses of acid and sodium bicarbonate.

Better still, when paired with a pH monitor, the CO2 injector’s dosing is controlled and will keep the water at desired pH and alkalinity levels automatically.  To be sure, this process can be managed manually, but there’s always the risk of an attention lapse in which too much carbon dioxide is added as a single dose or over time.  If that happens, pH can plummet to 7.0 or even to 6.0 – levels that will quickly prove detrimental to pool equipment and surfaces.

To be sure, this issue of carbon dioxide depletion and pH control is not a common consideration among those who design swimming pools with perimeter overflows, vanishing edges, waterfalls or fountain jets.  But it should be, because letting the situation get out of hand leads to disgruntled clients who have discovered just how bad a beautiful pool can look once scale gets a foothold.

Kim Skinner began his work in the pool industry 50 years ago, starting as an employee and eventually becoming manager of Skinner Swim Pool Plastering in Sun Valley, Calif.  He later became president of Pool Chlor, a chemical service firm with offices throughout the Southwest.  He is also a partner in onBalance, a consulting firm that performs both laboratory and field research on pool-water chemistry and on the relationships between water chemistry and pool plaster surfaces.