The masters of 20th-century residential architecture have a profound influence on design to this day. From Charles and Henry Greene through to Frank Lloyd Wright and on to John Lautner and many others, these giants of design continue to push modern interpreters on to new levels of excellence in concept, form and execution.

Among all of the spectacular houses these architects built, few speak to us with greater energy than Wright’s Fallingwater, a spectacular home he designed in 1935 in Mill Run, Pa. Cantilevered over a stream flowing to a dramatic waterfall, the project has inspired envy among generations of architects and homeowners who’d love to capture even a portion of its special magic in another setting.

This is a tale about one such attempt, a house built about 20 years ago with Fallingwater-inspired appearance but without similar advantages related to setting: While the building itself is a fairly clear and effective homage to Wright’s original – and although it is near a river – it definitely doesn’t straddle the water the way Wright’s house does.

That’s where this story begins.

As completed in the late 1990s, the home is a beautiful assemblage of cantilevered planes and glass walls overlooking a river at the bottom of a long, steep slope. Shortly after the home was done, a kidney-shaped pool had been built near the bottom of that slope by a local contractor (who also happens to be my uncle). While that watershape was well built, it did nothing at all to support or complement the home and its surroundings.

The pool wasn’t the only issue: It was as though the structure’s visual interest was cut off beneath the main-level deck, with a sunroom set into its base and a roughly defined, visually chaotic stone pathway leading down to the open space where the pool had been placed. It was dramatic topography topped by a grand home, but when I first arrived, it was also a massive case of unexploited aesthetic potential.

Happily, the home changed hands a while back, and the new owner had some ambition: He called in general contractor Joe Furey, with whom we at Drakeley Pool Co. had previously worked on a consulting level, to overhaul the existing backyard landscape. The job went out for bid and we won the competition partly because we were known to members of the project team – but also because, alone among bidders, we recognized the architectural style and were conversant in basic principles of Wright’s organic style of architecture.

The design team had Wright very much in mind as the renovation unfolded. Indeed, the house already looked enough like Fallingwater that they recognized that a waterfall was the missing link. But the slope was steep, rocky and well removed from the river, so they asked me an obvious practical question about the solution they wanted to pursue: Can it be built? I emphatically answered yes, but there were so many unknowns here that I added a long list of qualifications to my response. 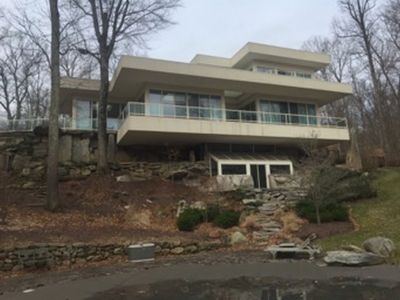 Long story short, they wanted to simulate a waterfall with a series of stacked, overflowing pools. This meant that we had to know everything we could about the existing house and how it had been built, about the slope and its structure, and about the soil and how it related to the stream before we could move forward. Happily, the original builder was part of the team, so we had a leg up when it came to gathering much of this information.

I also needed permission from the homeowner to rip out the old swimming pool to enable us to complete the overall impression the project required.

Once the soils engineers had their say, we determined that the pool structure could and should stand entirely separate from the house: It was to be set up just a few feet away on the same huge rock ledge, but we saw no advantage to (and possible risks in) tying them together physically.

And so we made our plans for a four-level system of vanishing-edge vessels – a large swimming pool on top cascading in sequence down to three smaller basins – to be embraced on three sides by wood decks, including a section jutting out dramatically to serve as a viewing space looking up at the house across the waterfalls and, in the opposite direction, down to the river.

To complete plans for our part of the project, we brought in David Peterson of Watershape Consulting (Solana Beach, Calif.) to develop structural documents for the composition’s huge support system. We knew it would be massive, but the key thing we had to figure out was the sequencing of the concrete placements and basically how everything would come together on site.

From our perspective, one of the great things about the design process was that, beyond all of the practicalities, we were actively involved in making the key aesthetic decisions, from the color palette to the stone selections and important visual details having to do with the interior of the main pool as well as the configurations of the lower pools. As always in a project as artistically ambitious as this, it was both empowering and gratifying to be involved on that level.

We started our excavation and carted off a tremendous amount of peaty soil and rock before we reached entirely stable material about eight feet down. We took no chances here, always mindful that for each foot we went down, a corresponding concrete structure would have to be built to replace the removed material and raise the pools to their required levels. The resulting substructure is truly massive – and required a creative approach to putting all the necessary material in place.

We’re known as shotcrete specialists and have a pious respect for what can be accomplished with pneumatically applied material, but in this case we had to sing a different tune: Given the topography of the site and the mass of the foundation, we decided that the substructure needed to be poured in place.

We built the forms and poured the foundation in several sections over several days, tying in steel to support successive components of the substructure as it all came together – footings, walls and interlocking panels. This left us with a foundation that roughly followed the profile of the pool structure we’d be adding atop the foundation while also leaving us a huge void we needed to fill with crushed rock to reach the appropriate level.

To this point, our forms had all been double-sided to receive the poured concrete. Once the foundation was complete, we moved on to our familiar single-sided forms and made ready for shotcrete application.

Despite various breaks in the action, there are no cold joints here: We knew that, so long as we prepared the receiving surfaces properly; used the correct mixing design; and shot our concrete at the right velocity, we could apply a shotcrete structure atop the poured foundation with no concerns about bonding agents or expansion joints.

In all, it took us five full days to apply the shotcrete for the four pools, with most of the time up front involved in shooting the main pool and some of its thicker wall and floor sections. We then followed up with the smaller pools and all of the critical vanishing edges. Although none of these vessels is particularly large, the detail work and achievement of the necessarily tight tolerances required our fullest attention.

We moved through this string of application dates by preparing each previously applied section of shotcrete to saturated surface-dry (SSD) condition with three-dimensional bond planes that interlock with the successively applied layers of concrete. If this is all done properly, there’s no need to worry about cold joints: The result is a grand, monolithic, watertight structure.

Once construction was complete, the pools were water-cured to ensure that their concrete gained maximal strength levels and then tank-tested to assess their watertightness. Compressive values after 28 days clocked in between 6,000 and 7,500 pounds per square inch, and all of the vessels passed their water testing with flying colors.

It was a complex job with awkward and sometimes difficult access, but once the soil conditions were known and we were able to plot out a precision approach to putting concrete where it belonged, it all came off without any hitches: Soon, we were ready to apply the finishing touches.

Once the pool structure was complete, the Ipé deck was installed and masons began applying stone to key interior surfaces, including step and bench details with a variety of Pennsylvania bluestone we suggested to add visual interest when the pool is viewed from above. The exterior walls and vanishing edges were wrapped in Vermont slate to match the house’s existing foundation colors. We also prepared the main pool for an automatic cover – always an interesting task with a vanishing-edge system.

We selected a light medium-gray plaster for the pools’ interior finish. This is a shade we often use because it works so well with stone details while offering a beautiful reflective surface that links the water to its surroundings. We also encompassed the wood deck with a glass fencing system, which made sense both given the prodigious drops as well as the views everyone wanted to preserve without interruption.

While we were busy with these pool-related tasks during the eight-month duration of the project, the general contractor’s crews replaced the old sunroom with a wood-and-glass structure that ties the pools and their decking back into the house.

The design team also added a brilliant touch in the form of the sweeping stairway that leads from the main floor of the home down to the pool deck. It’s reminiscent of the pathway leading from the main house at Fallingwater up to the guest house and its swimming pool – a perfect addition to the setting and an approach that puts anyone lucky enough to visit the site out among the trees before he or she ever reaches the pool deck. The new downslope landscape, complete with small seating areas that offer dramatic views up to the restyled house, is another thing of beauty.

Where Fallingwater achieved its look by integrating a home into the contours and details of its natural surroundings and by taking advantage of the presence of actual cascades, this project makes its mark by embracing a purely architectural waterfall system. It may not match Wright’s achievement in the Pennsylvania woods, but it’ll do for us (and our client) in the wilds of Connecticut.

William Drakeley is principal and owner of Drakeley Industries and Drakeley Pool Company in Bethlehem, Conn. He holds the distinction of being the first and only pool builder to sit as a voting member of the American Concrete Institute’s Committee 506 – Shotcrete and serves as secretary of the ACI C660 Nozzleman Certification Task Group. Drakeley is also an approved examiner for ACI-Certified Nozzlemen on behalf of the American Shotcrete Association (ASA), chairman of the ACI Pool Shotcrete Subcommittee, an ASA technical adviser and deputy director of the Genesis Educational Program. He teaches courses on shotcrete applications at the Genesis Construction School, World of Concrete and numerous other trade shows and is a contributor to Shotcrete Magazine and other industry publications.