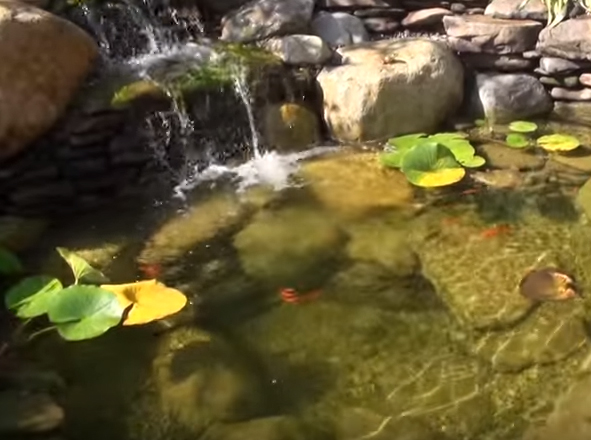 Mike Gannon is always gratified when a do-it-yourself pond owner trusts him enough to seek his professional help.  But as he relates in introducing this video on one such transformation, there's a single point he keeps very much in mind as he approaches the various tasks at hand.

We get involved in a lot of pond-renovation projects. It’s typically enjoyable because it’s challenging, soul-satisfying work – and somehow affirming to take something that’s inadequate or messed up and make it look fantastic and as though it’s been there forever.

In the project on display in this video, it was a case of stepping in to reinvent a pond the owner had installed by himself several years earlier. As do-it-yourself projects go, this one was both ambitious and relatively well done; it had simply become too overgrown and too much to manage without professional intervention.

As you’ll see, we at Full Service Aquatics (Summit, N.J.) stepped in to address both of those concerns, clearing away the excess plants and selecting some for inclusion in the new pond while moving others elsewhere; and bringing in an approach that went far beyond the capabilities of the average homeowner with respect to making the pond easier to maintain and enjoy.

To be sure, the usual deficits with D.I.Y. ponds were all here: For one thing, the pools and their connecting stream were small and shallow, probably because a lot of digging is a homeowner’s least favorite part of just about any backyard project. For another, the stonework and edge treatments weren’t graced by what you could call a professional or experienced touch. It wasn’t all bad – heck, the pond had lasted for years and was healthy enough to sustain lots of plants and frogs – but we knew how much better we could do by the space.

This all brings me around to an issue I didn’t discuss in the video: That is, the importance of being diplomatic when your work is destined to replace something lovingly and carefully installed by a homeowner no matter how much cursing might have been heard in the process. In this particular case, it was easy to be complimentary about what he had done because it had been based on decent ideas and had survived and was functional; in others, it’s hard to avoid stepping back and saying, “What on earth were you thinking?”

Either way, praiseworthy or pointless, I put on my game face and coax these former D.I.Y. homeowners – who obviously see a need or I wouldn’t be there at all – into visualizing a transformation of the space in ways that will make them wonder why they hadn’t given me a call the first time around.

If I get through this by helping without judging, all will be well.

Mike Gannon is owner and lead designer at Full Service Aquatics, a pond installation and service specialist based in Summit, N.J. A certified Aquascape contractor, he may be reached at This email address is being protected from spambots. You need JavaScript enabled to view it..