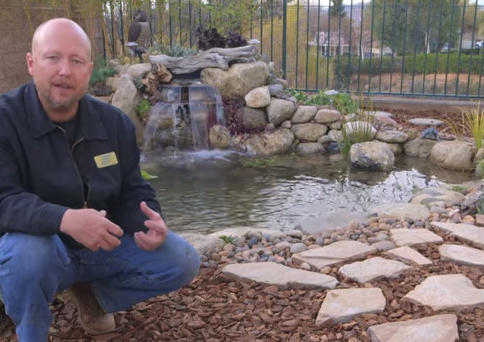 Competence is a wonderful thing – and that was exactly the problem with the pond we were called in to replace:  The original installers had none, and kept on demonstrating their utter lack of it all through the six or seven weeks they were on the job site.

Happily, competence is something my own crew has in abundance, and in two days we not only got rid of the mess our predecessors left behind, but also installed a brand-new pond and turned a shabby mess into a watershape of which the owners are justly proud.

We did the little things that had eluded the original crew.  We didn’t feel constrained, for example, by the curb that served as a boundary in our corner of the yard:  We removed it so we could set up the waterfall and skimmer on opposite sides of the watershape to let them function efficiently.  We also know all about equipment performance and how important it is for both the skimmer and waterfall units to be reliably level.  We made the water deep enough to let the fish get comfortable and included a cave to give them a hiding place.  And we set shelves beneath the waterline to stabilize the rockwork and give us the ability to cover the liner completely.

Because we know what to do, we also were able to focus on a number of issues that had escaped the original installers’ attention – including the importance of providing access to the pond not just for service, but also to allow for interaction with the plants, animals and fish for which the pond forms a habitat.  We tuned the sounds and the appearance of the waterfall as well, thereby drawing the entire backyard into the “pond experience.”

Most important of all, and as the video linked below shows clearly, we worked with the clients and read their needs and desires closely enough that we were able to give them exactly what they wanted, including a comfortable seating area close to the water’s edge.

In watching this pair of videos myself, I’m pretty pleased (and proud, too) about how swiftly we went from what one of the homeowners had described as a HazMat spill to create a beautiful backyard oasis.  But that, I know, is what competence is all about, and here’s hoping that the availability of videos such as these will help homeowners – and the professionals who would serve them – from getting in over their heads!

To see what we did with this awful mess, click here.

To take another look at the backyard as we found it, click here.

Eric Triplett is founder and chief executive officer at The Pond Digger Waterscape Design & Construction in Yucaipa, Calif.  He may be reached at [email protected] ponddigger.com.