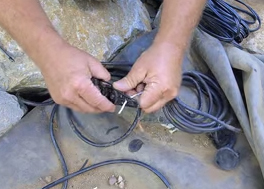 As becomes clear in watching this series of videos, pond installation involves a bunch of specialized skills, from working with the liner and circulation system to moving large rocks and, as we’ll see soon, arranging aquatic plants.  But completing the project also involves a range of common job-site skills.  As we’ve seen time and again, for instance, you need to know how to measure, fit and glue pipes, and you also need to know how to use construction foam to seal surfaces in ways that will make water flow where you want it to flow.

Another common skill set that comes into play is covered in this particular video, where I make the electrical connections that power the pond’s lighting system.  It’s about splicing wires, using wire nuts, applying silicone as a water repellent and then taping the connections into a durably waterproofed hub.  Finally, there’s connecting the transformer and initiating the system to make certain everything works.

The cool thing these days is that you’ll typically be working with low-voltage systems, so the consequences of failure aren’t severe or life-threatening.  But that’s no reason to be careless, because there’s still electricity involved and you want to get things right in ways that will allow the system you’ve installed to keep working for a long, long time.

Three points bear mentioning:  First, we don’t show in the video how to take the line from the hub over to the transformer.  Typically, there will be good distance between a pond (which is often set in a back corner of a yard) and the control panel (usually on the house) where the transformer will be mounted.  As a rule, if installation means running the line across the middle of the backyard and under a future expanse of decking, we will install it in a sturdy conduit to protect it from shovels and picks and other tools that might come into use on site long after we leave the project behind.

Second, it’s always a good idea to make certain you leave some slack in the lines to accommodate future service needs.  The easiest way to get going in the event of a problem is to cut off the wires at the hub rather than mess with the tape to gain access to the wire nuts.  You generally want a fresh cut anyway – and the only way that can happen is if there’s some excess wire to work with!

Finally (and this is something that only comes up as the video ends), when you rinse the pond’s interior before filling it, be sure to place a submersible pump at the deepest point to clear away the dirtiest portion of the rinse water.  The last thing you want to do is have all of that muck flow unimpeded into the filtration system – a bad way to get a new biosystem started!

To see the process of making the lighting connections in detail, click here.

Eric Triplett is founder and chief executive officer at The Pond Digger Waterscape Design & Construction in Yucaipa, Calif.  He may be reached at [email protected] ponddigger.com.