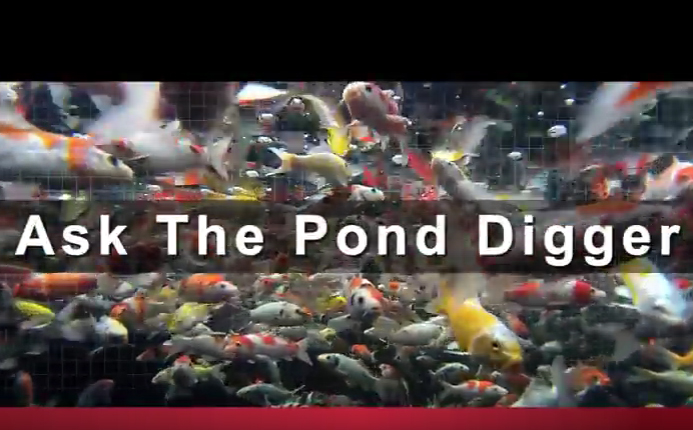 By early 2015, my folder of saved emails was stuffed with years’ worth of questions people wanted me to answer about either their ponds or, as frequently, ponds in general.  I decided at that time to answer a number of these inquiries in a video series I’ve called “Ask the Pond Digger.”

Most of the questions came from pond owners and do-it-yourselfers, but many others had come from pond professionals, some of whom were familiar to me – and it helped me realize that even those who work with ponds for a living run into unfamiliar issues or points of craft that incline them to reach out for feedback or additional information.

This is why I was happy when WaterShapes asked me to select a handful of the 60 videos produced so far, focusing on a few that had information that cut in multiple directions in terms of interest and significance.  Our aim was to find videos that would be helpful in staff training, for example, or that honed in on philosophical issues of the broadest possible interest to those who design and install ponds, streams and waterfalls.

This first video (actually number 12 in the series) is a case in point:  At that early stage in the series, I was typically tackling three questions that I thought fit together well.  (Later, I would generally cover only one topic, maybe two.)  In this instance, I chose to cover a trio that hit on pond-making at the most basic level, briefly discussing cycling, sizing and safety.

To me, pond cycling is a wild-card factor we do our very best to control.  If we get everything right, the process is usually complete in about six weeks, give or take, and we can walk away knowing that the fish, plants and our clients will be happy.  But it doesn’t always work out that way, for any of a number of reasons.

One factor I didn’t discuss in the video is the role that pond owners sometimes play in knocking things off track.  Let’s face it:  A new pond is an exciting addition to anyone’s backyard, and time after time I’ve run into owners who can’t resist jumping past the cycling schedule by adding “just a few” extra fish, increasing the feeding levels, failing to keep up with adding beneficial bacteria – or something else that keeps the pond off balance well after six weeks have passed.

As I see it, this discussion of the owner’s role ties nicely into the second question about pond size:  As I say here, I want my own clients to get the biggest pond they can afford, basically because I don’t want to be called in three or five years later to replace their 2,000-gallon pond with one that holds 5,000 gallons.  (I don’t mind the work or the checks, but there are limits!)

Wrapping up with a brief discussion of safety made sense to me here, because bigger ponds tend to be deeper ponds.  I am, of course, obliged to consider safety for my clients and their families, but I also weigh the pond’s future needs and the value of having good, easy ways to get in and out, whether it’s full of water or drawn down for service.

Safety is always a factor in pond design.  Some of the details to be worked out can be tricky and it would truly be simpler to move forward without considering this part of the picture.  But frankly, I wouldn’t have it any other way.

To see the video covering these issues in greater depth, click here.

Eric Triplett is founder and chief executive officer at Pond Digger Waterscape Design & Construction in Yucaipa, Calif.  He may be reached at [email protected] ponddigger.com.