From the start, the systems I call “Graphical Waterfalls” have always been about combining art and technology to create something unusual and visually arresting.

As discussed in a WaterShapes article in August 2007 (click here), it was an idea that began in the first year of my professional teaching career at the University of South Florida in Tampa.  It became an earnest professional pursuit when I asked a professor in the music department if I could borrow some time on his then-new paper-tape computer to experiment with controlling streams of falling water.

That was the early 1970s, and even then I figured it might be possible to create recognizable visual patterns with streams of droplets.  The music professor wasn’t particularly enthusiastic about my request, but he said that if I saw a way to use it for a musical purpose or at least to create a sound effect, he’d give me the access I needed.

Long story short, the work I did in collaboration with some of my students and a colleague in the mechanical engineering department led to development of the first three-dimensional, computer-controlled waterfall.  That initial system consisted of a horizontal, four-foot-square array of 64 nozzles – modest, but a good start.

I continued working with this original system for about three more years and made enough progress so that by 1977 I was able to display the first falling-water graphics – a vertical sine wave and a diamond.

The first big leap came when I was given a Project Design Fellowship by the National Endowment for the Arts:  I used the support to develop a square, 576-nozzle system that operated off a single modular valve and, by 1982, I was finally able to spell out words. 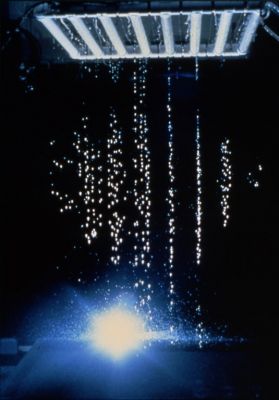 A larger system and spelling with letters was funded with a second Project Design Fellowship.  This allowed me to develop the networking of four of these 576 nozzle valve modules to form a two-by-two-foot. horizontal square system with 2,304 nozzles.  The result was first exhibited at Navy Pier in Chicago in 1988 by the Klein Gallery during the International Art Exposition.

The next big leap took the form of a private grant from the Kohler Company:  I used that funding to create a 12-foot-wide, 6,912-nozzle waterfall made up of a dozen of my one-foot-square modules.

Kohler had offered its support in exchange for an agreement to exhibit my work at two of their national trade shows each year, using equipment I’d made through their grant.  That was just the break I needed:  Once I went public at a few of these shows, exhibit companies started calling and our graphical waterfalls (called at that time “The Rainfall Project”) began appearing at trade shows, both to display marketing messages and to draw attention to booths. 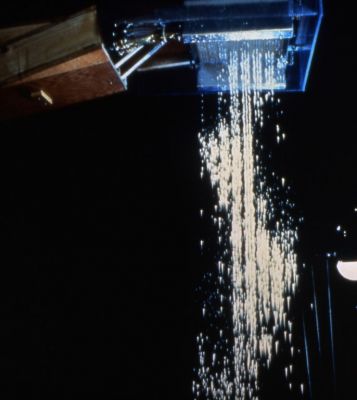 I’d never considered trade shows as being the outlet or venue for these effects, but off I went – and the great thing was that the sponsoring companies had no hesitation at all about funding the necessary transport, set-up and dismantling of the systems while covering our other expenses.

Fast forward about three decades and 160 national and international displays and permanent installations as well as the involvement of other professionals, and we move past dozens of intermediate steps that saw our displays become larger and more visually diverse.  Now we’ve completed the project highlighted below:  a cylindrical Graphical Waterfall we fabricated as a temporary installation for the Toyota National Dealer Meeting held in Las Vegas, Nev., in August 2014.

To get a sense of what’s involved, let’s move through the installation process in a stepwise fashion and then, finally, arrive at a video link that shows the display in action.

The housing for the 16-foot, 4-inch wide Graphical Waterfall system includes 576 nozzles per module hung within a faceted, 16-sided theatrical truss.  In all, there are 9,216 nozzles set up in six-nozzle-deep rows.  We also attached lighting systems to the truss; they’re seen in the image (at left) outside the framework; they were moved inside a bit later on.  In all, the upper assembly weighed 8,000 pounds once water was added to the system.

With our equipment in place, we made connections with eight one-ton chain hoists attached to the ceiling of the convention center.  By this point, we’d threaded all of the necessary hoses into position on the upper truss along with all of the electrical wiring and Ethernet control cables.  Shown complete in the middle image, the truss had an overall diameter on center of 21-1/2 feet.

With the hoists engaged, we raised the truss to a point 12 feet above the floor as measured from the bottom of the assembly (right).  It took two motor controllers to synchronize the chain hoists.  This was definitely a precision operation:  Everything had to be aligned per plan.  To that end, each of the hoist motors was monitored with a strain gauge and all levels were checked with floor-mounted lasers that communicated with the motor-control systems.

The cylindrical water tank is actually four 90-degree arcs of swimming pool vinyl draped over prefabricated, U-shaped aluminum forms (left). These are clevis-pinned with horizontal struts to form the inner and outer walls of the cylinder.  We also placed four three-horsepower pumps, one behind each of the tank segments, to achieve the target circulation rate of 550 gallons per minute.

The top of the cylindrical tank is fitted with PVC arms that straddle the inside and outside of the tank.  (We took great care in placing these arms to avoid harming the vinyl liner.)  The joints between the four pool arcs are cut down a bit to allow for equalizing tank volumes if there are any fill discrepancies (middle).

The PVC arms serve to support polypropylene grills (right).  Finally, the tank system is clad in an exhibit shrouding made of plywood covered with a plastic laminate.  These are attached to the sides of the tank structure with Velcro – everything specified for easy assembly and even-more-rapid post-event removal.

With the tank ready, we lowered the cylindrical truss to a level about two feet above the cylindrical tank (top left).  Once we were certain that the tank and truss were vertically aligned (obviously an important task!) we filled the tank with water and connected the hoses.  The system was then run in place to check for any problems:  We knew the entire convention center floor had been covered with new beige carpeting under the plastic sheeting beneath our feet, and soaking it was not an option!

With these test runs complete, we started threading our four two-inch-diameter hoses through a single vertical truss, placing it alongside the electrical wiring and Ethernet cabling (top middle left).   All of these connections had to fit within this foot-square box, an operation that eventually involved various members of our staff along with some show riggers (top middle right).  We knew it would all fit, but dealing with the flexibility of the hoses and cables along with the openings in the truss made for an unusual weaving exercise.

We completed this threading process with, in all, three sections of vertical truss, raising the upper assembly another section-length notch each time to put a bit of gravity to work in our favor (top right).  The completed height of the waterfall was about 24 feet.  With the vertical truss complete and in final position (bottom left), we ran another quick alignment check and used diagonal steel cables to adjust and perfect the radial orientation of the upper assembly.

We formally initiated the system on the morning of a day that would close with the three-and-a-half-hour opening reception for 3,500 people in attendance at the 2015 Toyota National Dealer Meeting.  We spent our time productively, running through the graphics we’d developed and turning them into a complete show.  (We couldn’t effectively do this beforehand:  Although our fabrication facility in Milwaukee, Wis., is tall enough and large enough, the ceiling is not strong enough to take the weight of a system this large.)

As the images show, lighting is a key component in the impression these displays make.  In this case, Toyota had retained the George P. Johnson Company (Torrance, Calif.) to stage the event.  In turn, GPJ hired a company to control the overall lighting system for the show.   Our systems include built-in lighting controllers, but GPJ wanted their lighting contractor to manage the entire hall, so we left everything in their hands and worked together very well.

Within the waterfalls, the water droplets can be programmed in two independently programmable layers that cover three rows of nozzles each in our six-nozzle-deep modules.  This allows us to create ribbon forms that can be seen crossing over each other – a very cool effect, especially when lights in the vicinity are dimmed and the system’s own lighting takes over.

The theme for the event was “Best in Town,” which appears in a sequence that also features the Toyota logo, stars (as shown in this article’s opening image), dancing water ribbons, a winding road and the show’s grand welcoming message (click here to see a full test run of the system’s graphic sequence).

The scale of the installation is seen in the human figures who pass through the space.  Later in the day, crews came through and removed the protective covering from the carpet:  After a few days of furious activity, everything was finally ready for the big event.

Stephen Pevnick is founder and president of Pevnick Design, a firm dedicated to creating Graphical Waterfalls, a unique system that uses precisely controlled water droplets to form letters, words and graphical symbols.  Pevnick has an extensive background in technology and fine arts, including a bachelor’s degree in design and fine arts from Southern Illinois University and a Master’s Degree in multimedia, fine arts and sculpture from Washington University in St. Louis.  A professor emeritus at the University of Wisconsin-Milwaukee, he has won a host of awards and grants for his work in developing Graphical Waterfalls.  Among his many notable accomplishments was the time in 1966 he spent working for legendary futurist and writer R. Buckminster Fuller.  You may find further information by clicking here.