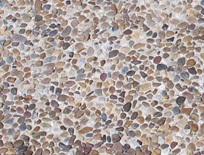 Traditionally, seeding was simple: It meant scattering pieces of rock into the surface of concrete, where they would give decorative flair to a slab.

“Nowadays, seeding has taken on a broader realm,” says Tom Ralston, CEO of Tom Ralston Concrete, in Santa Cruz, Calif. “We seed glass bits, silicon carbide, sometimes even bits of metal. Different things can be seeded — or broadcast — into the concrete, later to be exposed.”

Seeding helps create unique looks that aren’t obtainable with other materials, explains Bob Harris, president of the Decorative Concrete Institute. “There are thousands of options available, when you consider tinting the matrix of your ready-mixed concrete or cement-based topping with a variety of colors as a base in which you can seed exotic aggregates into.”

One reason contractors might seed concrete rather than adding decorative aggregate to the mix before pouring or casting is the overall cost. “You could be adding 2,500 pounds of aggregate, and aggregate can run 10 cents to 20 cents a pound,” says Tim Blankenship, concrete specialist at Atlanta-based contractor Floors by Design. “You could end up adding a couple hundred more dollars per yard to your concrete costs just from the aggregate.”

Other considerations include the desired appearance, the difficulty of placing the chosen aggregate and the availability of the aggregate, says Doug Bannister, owner of The Stamp Store in Oklahoma City. “Something (also) to be considered is how the performance of the slab might change if the aggregate is integral. With seeding, the integrity of the mix design is maintained.

“One offsetting cost factor is the labor required to broadcast and work in the aggregate,” he says. “If the contractor has the latitude to make a choice in methods, he or she must assign costs to these considerations to ensure profitability and still deliver the look and the long-term durability of the project.”

Types of aggregate that are readily available for seeding into projects vary from region to region, Bannister notes. “The Southeast part of the country has beautiful river rock, while the Northeast has strikingly handsome dark gray granite.” Harris takes that idea a step further, saying that even within a region of the country, such as the Southeast, the aggregates available can vary — for example, there’s granite in Georgia, but limestone in Florida. And areas near the seaside have ready access to crushed shells.

The most effective way to seed decorative aggregate into the concrete varies. “Clients want a nice, even, heavily laden aggregate finish,” says Ralston, “so it is all tightly compressed and compact. In order to get that, you need to broadcast your aggregate correctly.”

Although there are mechanical spreaders for more even coverage, the most common method is hand broadcasting.

While seeding doesn’t require significant changes to the mix design, there will be times when the contractor will want to do some tweaking. “It all depends on what you are seeding into the surface itself,” says Blankenship. “Is it anything that will affect the ASR — alkali silica reaction — which can be caused by glass or shells or different minerals, depending on where you are in the country? Is it being used for an exterior mix or will it be polished? There are a lot of variables when it comes to tweaking, and the best way to figure out is to try it out on test samples first.”

Saw-cutting should also be taken into consideration when seeding. “You need to be careful about saw-cutting early — on the same day — when you have heavy aggregate exposure, since this could cause pop-outs along the saw cut,” says Harris. “In most cases, we have not had issues with saw-cutting as long as the concrete has had sufficient cure time, which typically means the next day.”

Aggregate can be exposed in several ways, depending on the application. The floor can be shot-blasted to expose the aggregate and then polished, for example. The most common way to expose seeded aggregate is to use a top-surface retarder. According to Harris, the spray-applied product retards the setting of the surface paste, allowing for the paste’s easy removal.

“I look back now on how much we were pouring and exposing and I’m amazed at how good it still looks today,” he says.

This is another in an ongoing series of articles adapted with permission from Concrete Decor magazine. For more information on the magazine, visit www.concretedecor.net.