From Rice Cooker to Waterfeature 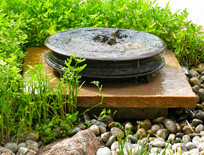 The warmth and solid heft of aged, cast brass are the hallmarks of the antique rice cooker — a treasure acquired in India several years ago — that now makes a statement to visitors approaching a modern Colorado home's front door.

Forged more than 150 years ago using the same techniques employed in making bells, this piece was sand-cast in one continuous pour sometime in the middle of the 19th century. It was intended as a ceremonial object, and judging by its appearance, it was a fixture at countless feasts through the years.

The bottom, in fact, is permanently stained black from the countless fires it endured, and I can only think that its repurposing from a life in the flames back then to its use as a waterfeature in the here and now would come as a shock to the system of the craftsperson who created it.

The shock would have grown when he saw us drill a hole in the bottom of the pot to allow water to fill it and spill over its ornately ringed sides. To eliminate any unsightly fitting on the bottom of the bowl, we simply set it atop a drywall sponge we sliced in half and into which we cut a hole of the same diameter as the one in the bowl. The weight of the water-filled brass bowl is enough to flatten and "seal" the sponge, yet it still allows the water to migrate slowly out of the bowl if there's a power outage.

Exquisitely simple in configuration, this feature is virtually maintenance-free on a year-round basis. There is a sizable reservoir hidden beneath the bowl that also functions as a collection point for runoff of surface water from an adjoining property. In the five years since we completed installation, it has been necessary to add water only in the driest months and even then only in small quantities.

Indeed, this project is something of a model of value engineering. The stone and bricks with which we framed the bowl came from a weed-choked bed across the driveway that we converted into a xeriscape. We collected and cleaned the stones and chipped the cement off of the bricks, then gave them a new, clean sand base. And we collected enough of these materials that we were able to create a number of echoing touches using the same framing technique throughout the yard.

The reservoir system is another simple composition. It consists of three large sump-pump basins that we surrounded with pond liner and interconnected with three-inch pipes. Two are upside down, while the third has an open top over which we placed the waterfeature's flagstone base. A high-efficiency pump in the bottom of the reservoir is rigged with a low-water shut-off switch to protect the system from damage in the dry months.

All of the mechanical systems are easily reached by lifting the pot and its flagstone base. The electrical chase is made up of a two-inch pipe that runs to an access point in the home's crawlspace. There's another two-inch pipe that serves as an overflow line leading to a French drain system in the front yard. Other than the antique bowl itself, the system was made with modest components at a low cost — a program that made the homeowners ecstatic.

This little feature draws constant attention from the street and has become a gathering spot when neighbors stop by on their daily walks. And when the windows are open on warm days, delightful sounds filter through the home's interior spaces as the water bounces its way down the bowl's concentric rings.

At the homeowners' request, we designed the system to run 365 days a year, basically for the benefit of local wildlife. As a result, it becomes encapsulated by snow and ice through the winter months and often takes on the appearance of an old-style coffee percolator with water bubbling up under what seems like a dome of glass.

When there are gatherings of family and friends, there is always an appreciative crowd around the waterfeature, and it's particularly popular with small children. In that sense, we've been true to the original maker's intent: By recycling the old pot as a central point of a modern family's gatherings, we've enabled this beautiful old ceremonial rice cooker to make a graceful transition across time and space.

Sure, we could have achieved similar effects with a modern ceramic pot, but how much more meaningful is it to borrow an artifact's past to add richness to its new setting and aquatic purpose? I can only think that all of this would please those who cast our rice cooker so many years ago!

Dave Garton, owner of Lawnchair Watershapes in Denver, is an expert pond and stream builder, as well as an in-demand business speaker and coach. He is a frequent contributor to WaterShapes.