Sometimes, it’s the unexpected that gives a place its true spirit.

That’s been very much the case for The First Church of Christ, Scientist, a 1975 addition to Boston’s historic Back Bay district.  The site features a campus plan devised by legendary architects I.M. Pei and Peter Walker, with grounds organized around a central reflecting pool flanked by a circular, ceremonial display fountain.  The famed fountain is enclosed by an equally famous bosque of linden trees pleached into lollipop forms.

For Bostonians and visitors alike, this classic design has become part of the urban fabric – and the church’s plaza a popular gathering place.

Not long after the original work was completed, children from surrounding neighborhoods (the South End, Fenway and the Back Bay) discovered the wonderful play opportunities associated with the 180-nozzle deck-level fountain, especially during the hot summer months. Since 1975, literally thousands of kids with their families in tow have made this space their summer hangout, and now second-generation children are being brought to the fountain by parents who grew up playing in its irresistible jets of water.

From the start, however, there was a problem with what was intended to be a decorative rather than interactive watershape:  It simply wasn’t designed for the purpose it had come to serve.

Our firm, Copley Wolff Design Group of Boston, became involved in the redesign and reprogramming of the famous fountain.  It’s a project that exemplifies the power of water to create and define public spaces as well as the importance such spaces in meeting the social needs of local residents and visitors from farther away.

Our goals were straightforward:  to increase safety and inject color and whimsy into a well-used space while preserving the sense of history of its famous setting.

We were aware, of course, that the transformation of the fountain from a decorative feature into a recreational destination had taken place gradually over many years.  As more and more children began playing in the water, their presence created a number of management issues for the church. 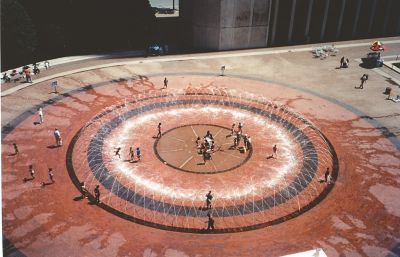 First, the watershape originally was set up with a six-inch-high, cast-iron grate that accommodated the trajectory of the nozzles through a vertical, sidewall exit.  While the water seemed to fly out of the ground as a result, the elevation created a hazard for children running through the water streams.

Second, the arcs of water cascaded to the ground and rushed to a central drain grate.  Water flowed to the grate in such volume that a shallow pool would occasionally vortex around it.  The vortexing also meant that the water could be pushed by the wind beyond the capture drains and, as a result, new make-up water had to be added to the system on a consistent basis.

Through the years, facility managers had reduced the vortexing by adding six-inch-high granite fins that radiated out from the center.  This worked – but added another tripping obstacle for the children.

As challenging as were these surface details, the fountain offered another set of issues related to the fact that it was built atop an underground parking garage.  This allowed for convenient placement of pumps, the storage reservoir, electrical panels and filtration systems, but it complicated things as well with concerns about waterproofing and about draining the subsurface roof.

All of these issues were to be resolved in the redesign.

To its great credit, the church recognized the importance to the neighborhood of what had become known as the Plaza Fountain and committed itself to a total renovation of the space and the upgrading of its watershape.

In preliminary meetings, the design team was given its marching orders:

[ ]  Reuse – whenever and wherever possible – existing nozzles, piping, pumps and storage reservoirs

The elimination of tripping hazards entailed re-grading the site to remove all changes in elevation – a direct solution, but one that involved many challenges with respect to draining the fountain area and rethinking the nozzle covers and trajectories of the water streams.  To manage the flow correctly, we took careful measurements and developed a set of test templates to document the arcs issued by each of the 180 nozzles.

To eliminate the grade change at the nozzle, the design team created a custom, flat, cast-iron grate through which the water was to be discharged.  An intermediate drainage grate also was introduced to eliminate the vortex and create a new central pool.

The 180 original nozzles were paired and crossed to give the fountain an interlacing effect.  All water issuing from the nozzles flows to the intermediate grate before moving into new subsurface trenches that lead to the reservoir.  Eight small, flush nozzle fills were added to the system:  These replenish the pool and drain back to the intermediate drainage trench, constantly regulating the water level in the central pool.

New fiberoptic lighting was introduced at each nozzle’s end.  The illuminator boxes are suspended from the ceiling of the underground garage and are linked through a central controller so that the color of the lighting can be sequenced and designed for varying effects.  A maximum of nine cables are connected to each illuminator.  To allow access for the cabling, we cut vertical cores through the roof slab.

We also had to deal with wind-aided fountain-water migration – a major problem on this particular site.  The Church calculated and mapped common wind conditions in an attempt to determine just how high the fountain should run with any given wind speed.  Once these determinations were made, wind sensors were installed on the roof of an adjacent building.  This placement mirrored the wind conditions in the plaza below, and the regulating system now automatically adjusts the height of the water streams to match wind conditions.

FROM PLAN TO PAVERS

The six-month construction project began in earnest with the demolition of the existing surface and the saw-cutting, forming and pouring of the new subsurface drainage trenches.  Once the trenches were in, we set up the subsurface drainage mat and waterproofing system, then covered the fountain area with a new concrete base slab set to the new elevation and slopes.

Once the cast-iron frames and grates were installed, the new paving system was applied.  Final construction stages included installation of the fiberoptic cabling and illuminator boxes, the adjustment of the 180 nozzles and tests of the various control systems.

Throughout the redesign and construction process, we constantly discussed issues of durability, energy efficiency and serviceability.  Along the way, for example, we spent a lot of time and energy designing the return flows so that the system is balanced and hydraulically efficient.  We also examined various options we had for surface grates:  We needed to accommodate the nozzles and the fiberoptics, for instance, without creating a new set of tripping hazards.

In addition, we evaluated myriad approaches to waterproofing and to keeping the water flowing through our subsurface conduits rather than around them.  We also looked into a range of lighting options, ultimately settling on fiberoptics both for the interesting illumination they provide as well as their safety and cost-effective bulb life.

Throughout the project, cooperation among key vendors and our design team was crucial.  We used the technical assistance they offered to create many custom designs that address the unique challenges presented by this project.  In fact, one of the lessons reinforced during this project is the importance of coordinating the electrical, waterproofing, fountain, mechanical and hydraulic-engineering consultants.

The result of these improvements is a public facility that will continue to serve as a venue for the spontaneity of local children – but without the former safety and maintenance concerns.  The new plaza also remains true to the aesthetics of the original design and is indeed a place where beautiful form now matches joyous function.

John Copley is founder and owner of Copley Wolff Design Group, a landscape architecture firm in Boston.  With extensive experience in site planning, design and implementation of projects throughout New England, he has been responsible for a wide variety of award-winning projects, including streetscapes and urban design projects noted for a special sensitivity to design and detailing consistent with historical contexts.  He is actively involved in all phases of the business, from office management and community involvement to project management, design and construction.  Lynn Wolff has more than 20 years’ experience in planning and designing for public and private clients and is a registered landscape architect in Massachusetts and New York.  She specializes in complex urban projects requiring expertise in management for multi-disciplinary project teams, multiple clients and extensive cultural, historical, public-art and public-participation components.  She often collaborates with outside design professionals, artists, government agencies and non-profit neighborhood groups to design public spaces that successfully reflect the diversity and cultural richness of their surroundings.