A Story in Stone 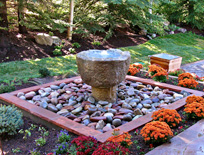 Through the years, my experience in designing and building naturalistic and architectural watershapes has led me into several situations in which my clients have wanted to use a special heirloom or artifact of some kind as a key design element in a project we're discussing.

These inclusions typically require a bit of outside-the-box thinking, but I generally love the way they can add interest and beauty to their settings and bring a certain timelessness to a composition. In a word, these pieces make statements of some kind, conjuring narratives that speak volumes about the tastes and personal histories of my clients and the artisans who crafted these pieces in the first place.

I am intrigued, for example, by the story behind the object pictured here. About 350 years ago, it was hand-carved from a single piece of stone plucked from the ground in Spain. Somehow it survived and found its way centuries later to a high-mountain home in Vail, Colo. — a journey that would have been inconceivable to the hand-tool-wielding artisan who carved it. And whoever that was would doubtless be flabbergasted at the sight of brightly colored skiers passing by in high-speed chair lifts!

We, of course, are in no better position to understand the life and times of a Spanish stonemason in the 17th Century, yet here is a piece of stone, now installed in the entranceway of a ski chalet, that is bond and witness to all that happened in his span of years.

The first step I took in turning his piece into a waterfeature was perhaps the scariest: core-drilling a two-inch hole through the bottom of the basin and its stone support column to provide a means for water to enter the vessel invisibly. The next step was pretty stressful as well. It involved carefully cradling the piece in canvas straps and lifting it into place by crane over the tops of 60-foot-tall pines.

To frame the piece, we developed a surround that ties into the formality of the home while taking advantage of the irregular nature of the artifact and the site's incredibly beautiful natural setting and backdrop.

The basin's edge is quite uneven, but we wanted water to flow over it in several spots. As a result, we boosted and roiled the flow so that water now laps over the edge at several points. The main spillway — from the lowest part of the rim — faces the house and upper patio directly, lending white noise to the space and, from a Feng Shui perspective, allowing prosperity to flow continuously toward the residence.

There is an ongoing risk in bringing a stone of this texture and make-up from the temperate climes of Spain to a high altitude where it will see extreme fluctuations of cold, heat and moisture. By subjecting this sort of artifact to freeze/thaw cycles, we definitely stand a chance of turning a valuable antiquity into very expensive Spanish road base.

To keep that from happening, we left the homeowners with extremely detailed instructions on draining the system late in the season, letting it dry completely and then securely covering it for the months when it will be buried beneath several feet of snow.

To facilitate end-of-season care, we provided a system to drain the feature. For in-season use, we also included a valve that lets the homeowners adjust the action of the water to suit their moods and levels of activity in the area. A remote pump vault holds enough water to fill the basin and still keep the pump fully submerged even through on/off cycles. In a unique twist, the reservoir is filled automatically off the sprinkler system through the summer season.

Will subsequent owners of this home take similarly good care of this waterfeature? There's no way of knowing, of course, but based on our close examination of the piece, it has been repaired many times in its long lifespan and has stood up well to the insults it has endured since being pulled from the earth. We all have the feeling that it will do well for many more years, come what may!

Dave Garton, owner of Lawnchair Watershapes in Denver, is an expert pond and stream builder, as well as an in-demand business speaker and coach. He is a frequent contributor to WaterShapes.