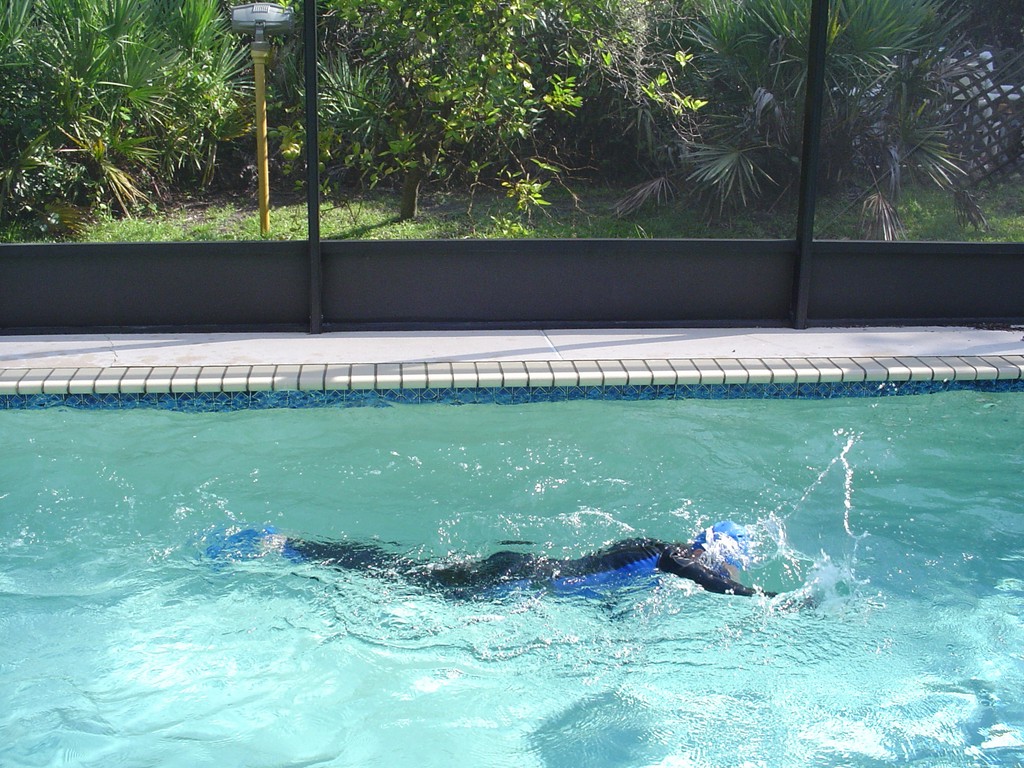 When I was a child, I read a biography of Theodore Roosevelt and discovered that we had asthma in common.  In my case, doctors treated the condition with medications, but Roosevelt had lived in a time long before the era of modern medicine, and I was interested to learn that he kept his condition under control by swimming regularly.

About the time I turned 40, we had a pool installed at our home.  Even with

infrequent workouts, I noticed immediately that Roosevelt was on to something and that my asthma was much better after I’d swim.  All these years later, I found myself recalling his regimen and wishing I’d turned to swimming earlier in my life to help manage the condition.

Little did I know then how much more important swimming was to become to me!

In those early years as a pool owner, however, I was quite busy raising children and pursuing a career, so I didn’t devote myself to water exercise and only swam a couple of times each week for short distances.  Even that helped, however, mostly because it prompted me to become a daily swimmer when I was diagnosed with a far more serious medical condition later on.

I had my first attack of multiple sclerosis (MS) when I was 47.  I’d heard of the disease before, of course, but like most people who haven’t experienced it at close range I didn’t know much about it.

In brief, MS is a condition in which the body’s immune system attacks the myelin layer around the nerves in the spinal column and brain.  Myelin is the fatty substance that protects the nerves, and when your body chips away at it when you contract MS, it becomes harder for your nerves to transmit signals.

This causes a range of symptoms beginning with a heaviness in the arms and legs, memory loss, crushing fatigue, loss of balance, impaired eyesight and some truly peculiar physical sensations.  In extreme cases, the axons – that is, the nerves themselves – can be significantly damaged, with paralysis and death being the result.

It’s an illness that, on one extreme, can be so mild that some people don’t even know they have it – and on the other, so extreme that it will completely debilitate or, rarely, kill.  Everybody’s symptoms are different because MS attacks different parts of the central nervous system – sort of like with the wiring in your house, where you lose lights in one room if a circuit fails but the rest of the house stays lit.  It all depends on which nervous “circuits” are damaged.

In my case, the first documented symptoms involved the sensation of having 50-pound weights strapped to my legs:  I couldn’t walk from one end of the mall to the other – and then the sensations spread to my arms.  I also had all sorts of strange manifestations, sensing at times that I’d just been slapped in the face or that water was trickling down my leg.  Sometimes I would scratch my thigh and also feel as though I was scratching my ankle at the same time – or would feel as if ants were biting me all over my body.

Not only was all this extremely upsetting, but it was quite odd – and even when things weren’t severe I knew that something just wasn’t right.

I was simply terrified when I was diagnosed, as is the case with most people who learn they have a serious condition.  I had young children and was worried that I would no longer be part of their lives, and I cried for at least a few minutes every day for months.  My situation was at first exacerbated by the fact that I had three contradictory diagnoses:  One neurologist said that I didn’t have MS, another said I definitely did and a third (along with my family doctor) said I “might” have it but wanted to observe me for a while before deciding how to proceed.

In all, it took more than three years to confirm that I had MS beyond any doubt.

Based on my symptoms and the reading I’d done, however, I’d believed from the start that I had MS, but there was no way of knowing how aggressive my particular condition might be.  The upshot of the split verdict on what was going on was that the doctors initially decided not to treat me because the drugs that slow down MS have considerable side effects.  Prudently, I think, they wanted to see how things progressed before starting me on that path.

One of the characteristics of MS is that when your body heats up, you experience what are known as “pseudo-flares.”  These aren’t actual MS attacks but instead are episodes in which you experience some combination of your symptoms.

These pseudo-flares result from the fact that your body has the capacity to compensate for damage to one part of the nervous system by re-routing signals through undamaged nerves.  Sometimes, even nerves with damaged myelin sheaths will fire up and transmit signals, but not as efficiently as before.  When the body heats up, however, myelin function decreases – and that’s when these odd symptoms start to appear. 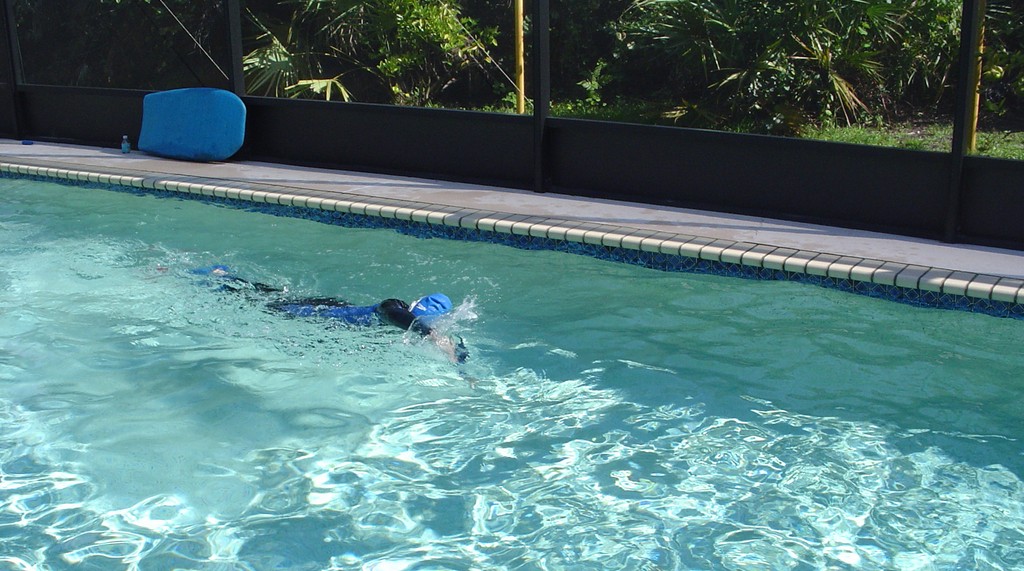 Of course, this heat sensitivity makes most forms of exercise extremely problematic, and this was a real difficulty for me.  I’d been physically active throughout my life and had always been one of those people who, when I would go to the store, would park in a space far away from the entrance so I could get in a few extra minutes of walking.  As anyone with children and/or a career knows, it can be tough to find time to stay in shape, so I always did little things like that to keep up my level of physical activity.

I’d also been a tennis player, but I found that I could no longer play without experiencing pseudo-flares that brought on loss of both vision and hand dexterity.  Then there’s the fact that I live in Florida, which meant that I could only do things when the weather cooled off.  It was clear that I needed to find another path – and this is where swimming entered the picture.

Exercising in water allows you to keep your core temperature down, making it possible for someone with MS to pursue vigorous workouts without experiencing pseudo-flares.  In addition, because you’re in water, you don’t run the risk of injury as you would if you experienced symptoms (such as a loss of balance) while doing land-based exercises.

So even though swimming isn’t a cure for MS, it enables those with the condition to keep up good cardiovascular health, increases strength and flexibility and, perhaps most important, offers a wonderful feeling of empowerment:  Even though you have a serious illness, you can still stay fit and active.

As I mentioned above, one of the most significant symptoms of MS is that you can feel extremely fatigued.  It’s one thing to say that, but it’s quite another actually to experience it – sort of like running a marathon, staying up all night afterwards and then running another marathon the next day.  It’s a state of exhaustion that’s difficult to imagine unless you’ve been through it, and it’s something I experience every single day.

With swimming, however, for several hours after I get out of the water the fatigue stays away.  Miraculously, the sensation of weightlessness in the pool also helps me feel semi-normal, as my legs and arms do not feel like they weigh so much when I’m immersed.  That’s just fantastic – and what I just can’t understand is that this power of getting in the water isn’t being pushed by the medical community.

In researching MS through the years, I’ve routinely visited patient bulletin boards on the Internet and have read numerous accounts of others with MS who’ve also discovered the amazing therapeutic benefits of swimming.  Not long ago, in fact, I read a message from a woman who said she’d been confined to a wheelchair before she began to exercise in a pool:  She’d been told she’d never walk again, but after months of slowing increasing the duration of her workouts in the pool, she was able to get around again on her own.

My own case is just as compelling, although the story is different.

Without dwelling on the specifics, at a certain point in my experience of MS one of my doctors prescribed a standard medication.  As it turned out, certain batches of the drug had been incorrectly manufactured – but by the time this news was made public, I’d taken it for eight weeks and it had severely damaged my lungs and my heart.  So now, on top of having asthma and MS, I had cardiovascular damage as well and could not walk more than a few steps without resting.  It would have been easy to lose hope.

In subsequent months, I sought treatment wherever I could find it and eventually ended up at the Mayo Clinic, which I believe saved my life.  To that point, nobody I’d spoken with had ever recommended exercise, but doctors there said they wanted me to get active because exercise has anti-inflammatory properties they thought would be useful against MS, which causes inflammation.

I was deathly ill at the time, but within five months after I received that recommendation, I was swimming a mile every single day.  And I haven’t looked back.

That was three years ago, and today I feel much healthier.  Although I still have asthma, MS and permanent medication-related scarring on my heart and lungs, my symptoms are much milder, my balance is better and all that swimming helps me keep my weight down.

Although I’m not a medical professional, a scientist, a researcher or even an expert in aquatic exercise, I am certain beyond any doubt that swimming laps is a magic bullet for people facing not only asthma and MS, but also a range of other physical challenges.  In my case, in fact, exercising in a swimming pool helped me greatly improve symptoms of three separate ailments.

I believe this is a message that has been underplayed for far too long.  Whether it’s the medical community, the watershaping industry, people involved in the sport of swimming or perhaps celebrities who’ve had similar experiences, somebody needs to spread the word about the benefits:  I know through personal experience of the most critical kind that there are people out there who need to know how much swimming might possibly help them.